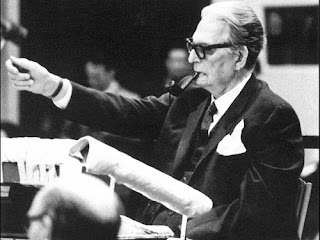 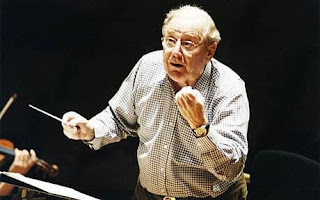 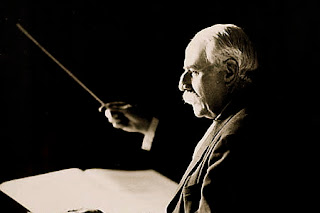 So you may have listened to the BBC Radio 3 Building a Library on Elgar's Falstaff by now, but if you haven't, it would be unkind of me to blazon the front runner amongst a mostly fine selection to the rooftops. Which is why I've chosen an image of Elgar the conductor, historical choice from 1930, above, after Klemperer and Mackerras, whose recordings of Mozart's Don Giovanni have so far been my lynchpins in the first three of five Opera in Depth classes I'm devoting to the opera.

And of course I'm in seventh heaven, living and breathing Mozart for so much of the week. I must also say that for all its skewered brilliance, Richard Jones's ENO production didn't affect me as deeply as revisiting Deborah Warner's take for Glyndebourne. I've always admired it the most for taking what I'm convinced is Mozart's and Da Ponte's line in the first scene that when a girl says no she means no. Does it have to be a woman director who has the courage to accept this? Besides which, the students agreed that Gilles Cachemaille is a very convincing seducer with an edge. 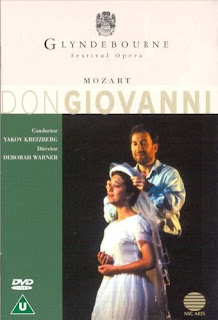 We all loved the first scene with Zerlina, so softly persuasive with the bizarre on-the-spot suggestion that she marry him; so convincing that Juliane Banse's gorgeous virgin feels like she's in a dream; so clever to have Giovanni dress her rather than undress her, putting on the wedding accoutrements instead of taking anything off.

As for Klemperer, I ordered up his recording thinking I'd want an extreme opposite to Mackerras's perfect and mostly brisk pacing. But I ended up mostly convinced: when I talked it over with Stephen Johnson, who was staying here on Wednesday night before we travelled up to my old workplace the Freud Museum to record for a Radio 3 documentary on  Freud and music, he pointed out the energy of Klemperer's rhythmic articulation, which means that slow rarely feels slow (he used the example of playing OK's Fidelio, and his wife Kate being smitten and surprised that it felt faster than it actually was). Of course there are exceptions rather beyond the pale - his late Mahler Seventh and Cosi, for instance - but this Giovanni brims with energy. And I love the battle of two intelligent basses, Nicolai Ghiaurov and the great, underrated Walter Berry as Leporello, rising to three when the statue of the Commendatore (Franz Crass, also magnificent) comes to dinner. 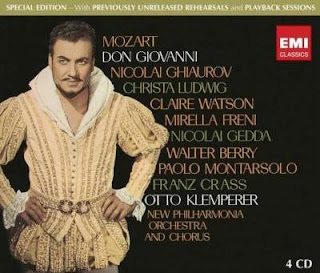 Here, too, we 'bought' a mezzo Elvira, Christa Ludwig, and Mirella Freni is at her youthful best as Zerlina. Curious that there are two married couples featured - Ludwig and Berry were still together when the recording was made, Ghiaurov was yet to wed Freni (I wonder if the wooing began in the studio here). So, paraphrasing RuPaul, it's a case of 'Klemperer's Don Giovanni - bringing couples together'. 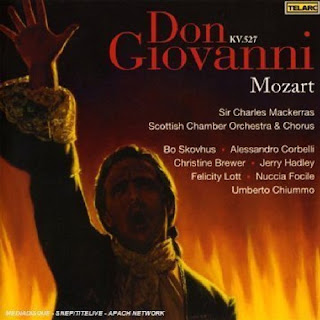 Berry even trumps the superb Alessandro Corbelli, Mackerras's Leporello, in the Catalogue Aria. And the recits are no less brilliant, though of course Mackerras has the greater sense of theatrical pace. We'll be turning to Giulini for the great Quartet and the most ineffable Trio in the middle of the Act One finale. Otherwise, curious how simply wrong early Don Gs were in the conductors' approach to tempi - Andante should never mean Adagio, and Mozart's Andante is brisker than, say, Brahms's (another Johnson apercu). 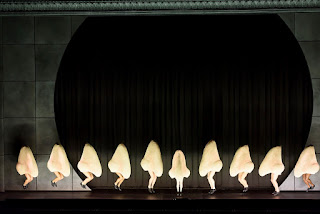 So, two more weeks and then on to The Nose, with an interpolated visit from Mark Wigglesworth. Seeing Shostakovich's first opera last night reminded me that quite a lot of it doesn't pass muster without the visuals, and Barrie Kosky failed to lift a couple of rather otiose scenes. But there are certainly flashes of genius like the dancing multiple noses (pictured above by Bill Cooper for the Royal Opera). My current earworm, though, is Britten's Billy Budd, which Opera North did so clearly and unforgettably. That was a worthwhile trip to Leeds.

By happy coincidence after we'd finished recording at the Freud Museum yesterday, we walked up to Hampstead and passed the site of Severn House, where Elgar composed Falstaff inter alia. The plaque is getting tatty; how about a proper light blue roundel? Freud has one, after all. 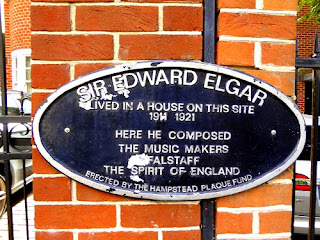 Final teaser with spoiler warning: this is how the Building a Library top choice looked when I first bought it on LP. If you don't want to know whose the performance is, don't read the small print. 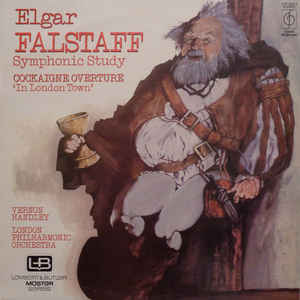 " Don Giovanni is the opera of operas - in Mozart's work it is the climax and not only of his operatic compositions" - such was the conclusion of Otto Klemperer, who added that for him " the most important scene in Don Giovanni is the great confrontation with the Commendatore in the second finale......This scene is unique in the literature of the world. The music comes from the remote distance. Every epithet seems to me inapposite"

I could add the comment of others that, although Don Giovanni is unsuccessful in his seductions in the opera, his aria when he meets Zerlina demonstrates his overwhelming talent when he sets out to seduce a woman.

The trouble is that whenever Mozart did something transcendent in his later years, he went and trumped it by something else transcendent in a different way. He met the demands of each drama at the highest level throughout - that goes for Cosi and Magic Flute, and even La Clemenza di Tito.

But I take Klemperer's essential point.

Yes, good point about his essential talent - which in the DVD seems akin to hypnosis.

I know that trio is your own personal high point in the Mozart oeuvre. But I could cite so many others, and not want to choose between them. A personal favourite is something else, and mine's Cosi. Yet when I see a perfect Figaro, or a Don Giovanni that works, or a Magic Flute that has me in floods of tears at the happiest moments, I'm not sure...

My feeling always is the La Clemenza di Tito is an early work, before his real genius had crystallised.....but of course it was not. Very odd. I think some bits ( arias) of Tito could have been better written by Handel

If one is looking for some recognition of ultimate reality ( in so far as we can see anything of it whilst this muddy vesture of decay doth grossly close it in) then Klemperer was right about the finale of Don Giovanni.

If your reference to "trio" was to the trio when the Commendatore was dying, I do not elevate that to being my personal highest point - but its analysis of the human predicament is beyond all competition. We will die, we see others dying, it is all there

Well, it's the one you always bring up as the epitome of Mozart;s genius.

Remember that the Act 2 Finale must always go on after Don Giovanni's disappearance, and that the music of the 'remainers' is also fabulous. Dramatically Warner makes it work too.

Act 2 of Tito has that sense of at-one-with-the-world which is unique to late Mozart. Idomeneo, although his first operaratic masterpiece, isn't at one with anything.

There was a period ( was it the late 19th century?) when the post Don Giovanni part was omitted.

I suppose I emphasis that trio as so few others do. I am emphasising it as an amazing psychological insight.

Indeed - and Kasper Holten omitted it, I'm told, in the revival of his not (to me) at all persuasive Royal Opera production. First time round the 'survivors' were behind a screen as if they didn't matter in any case.

Anyone who omits the post Don Giovanni musical commentary is seriously in error. The opera is not a story about a naughty man

Agreed. Or at least it is more about the havoc wrought on society by such a bad hombre.