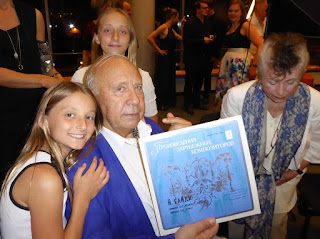 If only I could have made the entire, exceptionally long stretch of Pärnu Festival this year to hear Neeme Järvi in his 80th birthday year conduct the Tallinn Chamber Orchestra, and - I gather - an encore with the Academy Orchestra in the first week as well as what I did hear in the second - four terrific concerts from the Estonian Festival Orchestra and its soloists. Alas, Proms duty as speaker called on the intervening Sunday so I couldn't get out there - starting in Latvia, a country I'd never visited before - until last Monday. It's looking as if I may have to wait until next February when Järvi  père is scheduled to conduct the work he's always pleaded to do at the Proms, Tobias's massive oratorio Des Jona Sendung (Jonah's Mission), in Berlin. Well, he told me that the knee problems which had stopped him returning to his beloved Royal Scottish National Orchestra earlier this year - I was all set to go - seem to be sorted, so fingers crossed.

He was, of course, a benevolent presence at the last night in Pärnu, where after the concert older son Paavo, the festival's presiding genius, generously and movingly feted his father as the critical guiding spirit. I got to have a chat with him at the party, and was especially happy with my day's discovery - a copy of one of his 1980 Melodiya recordings of Haydn's symphonies. He's holding it above, flanked by Paavo's two daughters Leah and Ingrid, with Mrs J, Liilia, to the right (two special Pärnu pals can just be made out in the background - New Best Orchestral Friend, horn-player Catherine Eisele, and the wonderful administrator/bassoonist Tea Tuhkur looking on). And an official photographer - not sure who, since this is from a batch on the Estonian Festival Orchestra's Facebook page - caught me leaning earnestly forward from my seat at the feet of the master. 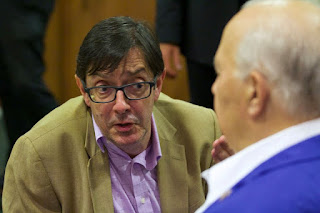 Two of those LPs were released, the rest suppressed and his name wiped from the record when he emigrated to the west later that year. It was also when I first got to hear this then unknown-to-me conductor and orchestra (the Gothenburg Symphony) under circumstances which I explained a couple of years back on the blog. No harm in reproducing a second time the photo taken of him outside the Gothenburg Concert Hall, also from 1980. 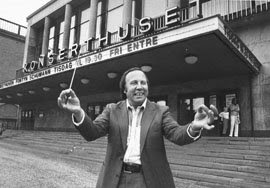 Neeme expressed surprise when I showed him the LP, and assumed I'd brought it from London. The circumstances under which I came to it seem serendipitous. I'd bought two Melodiya box sets from the shop on Pärnu's Supeluse, the main road to the beach - one of The Barber of Seville with the great Kozlovsky as Almaviva and Mark Reizen as Basilio, conducted by Samosud, 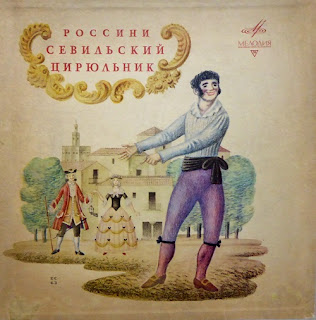 and the other of Prince Igor with - as I thought - of Lemeshev, Reizen again and Melik-Pashayev conducting. But when I got it back to the hotel, I saw that the booklet actually listed two recordings, and this was the later one under Ermler, which I have on CD. So I took it back and, just as I seemed to be drawing a blank for a replacement - other Melodiya boxes with fun designs turned out to be Soviet pressings of Callas in Lucia and Toscanini's Otello - the shopkeeper brought out another pile of classical LPs. Neeme's early Haydn happened to be among them. Of course I had to get him to sign it some 37 years later. 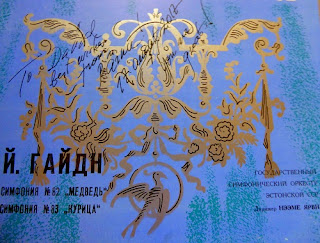 The performances, which I listened to this morning, are full and spirited, not at all over-romanticised in any way; and of course the humour is fully appreciated.

As Estonian Festival Orchestra clarinettist supreme - and one of the handful of the world's best - Matt Hunt pointed out once we'd rolled on from the concert hall to the nexus of festival socialising, the Passion Cafe in the old town, what wouldn't most of us give to be 80 and propping up a bar at 3am? Neeme finally left shortly after that time to another speech by Paavo, to which he graciously responded, 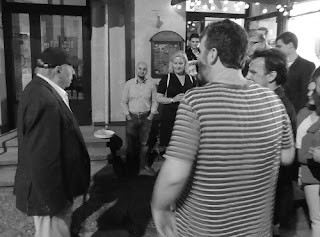 shared another laugh with Matt and Paavo, 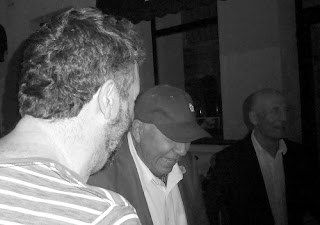 and headed off down the street supported by stick and loyal son (here's leader Florian Donderer, of whom Neeme thinks so highly, heading towards me. With apologies for the poor quality of the night shots - with or without flash, they don't come out very well, but there's no alternative record). 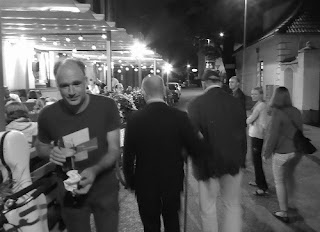 It seems a shame that because I wasn't there, I won't be able to use pictures of NJ's earlier appearances on the Arts Desk piece when it's ready, especially as they were taken by resident masters, Kaupo Kikkas (the first below) and Taavi Kull (the third), with one of many excellent complementary and equally professional shots by David Kornfeld (the intervening triple portrait). So the blog will do. Here he is conducting the brilliant young Academy players at the end of the concert shared by the various conductors on the Masterclasses he takes annually (see some pics from last year here), 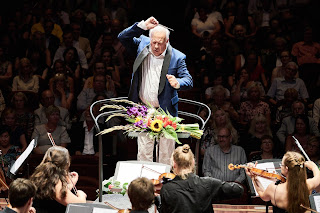 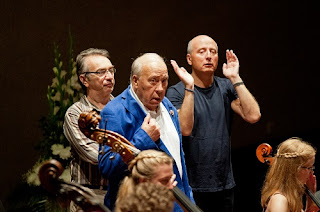 and with Paavo at the end of the concert. 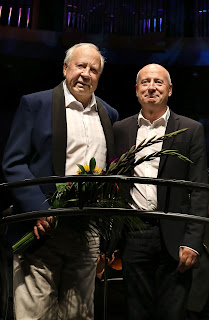 Next year, if I'm invited back (and even if I'm not), I have to do it all. In the meantime, coming home was not such a bump since back at the Proms I heard a good-in-parts Schoenberg Gurrelieder from Rattle, a glorious Bach triple whammy on Sunday very much crowned by the best St John Passion I've ever heard live and last night another exceptional Balt, Lithuanian Mirga Gražinytė-Tyla, conducting 'her' City of Birmingham Symphony Orchestra in a dazzling programme. The future looks good in hands like this. Photo courtesy of Chris Christodoulou/BBC. 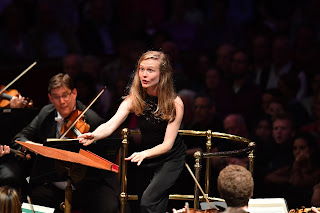 And now for two concert-free nights with some time for digestion of abundant riches.

UPDATE (24/8) The full Arts Desk report on the Estonian Festival Orchestra's concerts in Pärnu and Jūrmala is now up and running.
Posted by David at 18:06

David - lovely to read your blog on Neeme, who is very dear to us as long-standing supporters of the RSNO. By chance we were in Helsinki/Tallinn on holiday around the time of this year's Parnu Festival and jumped at the chance of attending the final concert. Our first time seeing Paavo conducting as we've never seen him in action with RSNO - we need to pester management now so we can complete the set! The concert was a great experience and I agree totally with your review, especially the Sibelius 2 which was breathtaking. These Estonians are mighty keen on their music: 8pm start and 1130 finish? At 9.45 most of the Glasgow audience are out the door for their last bus! Back in Estonia we took the pre-booked bus back to Tallinn with about 40 other dedicated souls...in bed by 0130, wouldn't begrudge a minute.

Now...you don't know anyone in Estonian TV by any chance?

The Estonians' love and knowledge of music always amaze me, Ian: even the two regular photographers are serious musicians. Do you go back Neeme- and (R)SNO- wise as far as I do? How he transformed our musical lives in Edinburgh. I never thought Paavo would reach that level - he started off quite cool, unlike his very impulsive and different brother Kristjan - but it seems he has now. Only with a very special ad-hoc orchestra is this sort of thing possible.

I can certainly find out about Estonian TV. Are you wanting to know when the concert is due to be broadcast? It was on the radio live and then disappeared - usually everything gets archived - but is due to be screened soon. I'll email you once I know. Presume you loved Tallinn too - wonderful city; I could live there but I don't expect my Estonian would progress very far...

PS - now I remember I heard two Scottish accents in the Tourist Information Centre around 4pmish on the afternoon of the final concert day and wondered what brought their owners to Pärnu. Could that have been you?

What a small world, David! Yes, that would have been us in the Tourist Information Centre. We loved Pärnu and Tallinn also - our first time, but will definitely return if we can. We caught the train down from Tallinn earlier (2.5 hours -ouch!) and had the bus (also booked via the Festival) back afterwards (half the time!) The bus felt like a regular thing for concert-goers and it's fascinating to compare that dedication with our experience in Scotland (though there are a good few here who would go to those lengths.) Amusing story - when we boarded the driver had local radio on - very much cheesy pop - and one of the regular ladies walked the length of the bus and quietly but firmly demanded the radio turned off, to great approval from her fellow passengers.

I go back to about 1980 (an SNO Prom with Norman del Mar and Itzhak Perlman, no less!) with the orchestra as a teenager, saw a fair bit of Neeme in his heyday but didn't start going regularly until the late '80s when a proper job enabled Season Tickets to be bought.

And yes, I'd be most grateful to know when they're broadcasting the concert so I can see if it can be watched online somehow.
Best wishes
Ian.

This includes two works you didn't hear in the final concert (Shostakovich 1, in its rightful place at the start of a concert and the Erkki-Sven Accordion Concerto).

No intelligence from festival office yet about the Estonian Radio/TV broadcast.

I think I've written this before, but as a student I arrived in Edinburgh in 1980 to catch the declining years of Sir Alexander Gibson - occasional gems, like his Elgar, but his Beethoven was terrible - and so the arrival of NJ was such a breath of fresh air. I interviewed him for The Student newspaper - the title (not mine, of course) was 'An Estonian with SNO on his boots'. RIP Lynne Walker, then Press Officer of the SNO, who set the whole thing up and later became a friend. She died much too young - it was a real shock to me as she'd kept quiet about her illness.

A wonderful celebration of NJ, and I loved the serendipity of your finding the Melodiya recording!