Bonnard and Ruskin: diamonds and gemstones


From the big picture 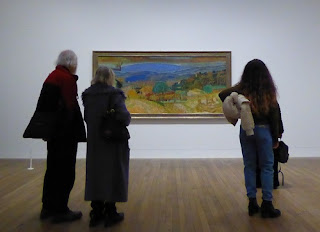 to the cabinet of curiosities 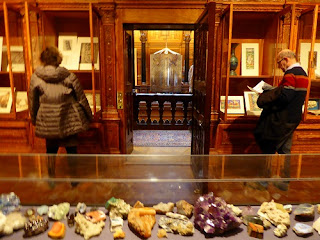 I feel enriched by two very different exhibitions. Astonished by so much critical negativity surrounding the huge Pierre Bonnard show at Tate Modern; all artists I know, including my beloved friend Ruth Addinall with whom I went, have nothing but praise for the master. What are the claims? He didn't reflect the upheavals of his times; he couldn't paint animals; it's only about colour. Stuff and nonsense. In the first case, just focus on what he did cover - mostly his various homes and women he knew well - and ask if he succeeded. My answer would be, more than I could have imagined before I visited. To catch the 'thing in itself'ness of people and animals does not require literal forms - these are forms in motion. And it's not just about colour; the ability to see different angles of a scene and to give them depth, even (this surprised me) profundity remains consistent in his work from 1907 up to his death in 1947. I loved all the works on display to varying degrees, with the exception of a few in the last room. And the very first of his Vernon rooms-and-landscapes from 1914 is a stunner, complete with dachshund. 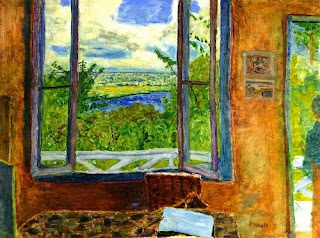 The one so many of us know and love is from 1925, the dining room at Vernon with the dog's snout and brow just peeking above the table. 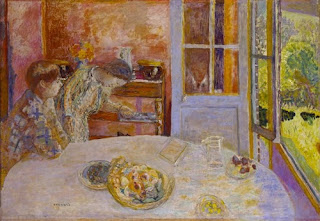 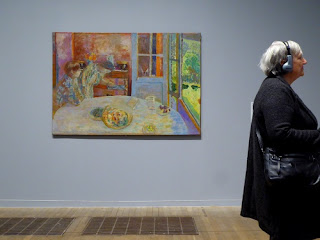 Maybe Bonnard was a god of small things, but to see into their essence is the task of genius. It helps that all these things I love so much. An airy room with pictures, a dog, a view onto nature. Coffee, too. 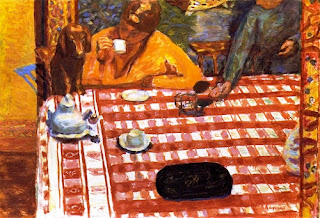 His nudes are intimate studies of his beloved Marthe, long-term companion, whose death in 1942 seems to have taken a lot of the elan out of his work. Again, Marthe in the bath is seen from so many different angles and there's a depth to this. Both these paintings are from 1925, but there are others just as fine from 1914 and the early 1940s. 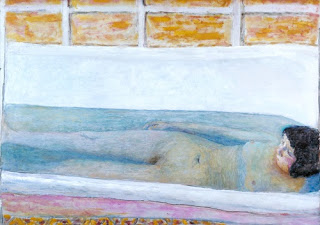 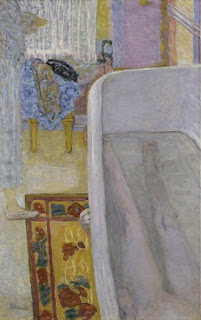 Not a very kind segue, perhaps, to nutty John Ruskin and his horrified reaction to his wife's pubic hair on their wedding night. While Bonnard must have been genial company, Ruskin would probably irritate the hell out of you if you met him, with his ridiculous prejudices against the Renaissance, Die Meistersinger and Palladio, to name but three. But what he did cultivate in art and nature he pursued very beautifully with word and brushstroke, and the selective but rich exhibition at Two Temple Place, sadly now over, was such a joy. As is the building itself, an extraordinary late Victorian mansion commissioned by William Waldorf Astor in high neo-Gothic style which, of course, houses Ruskin rather well. 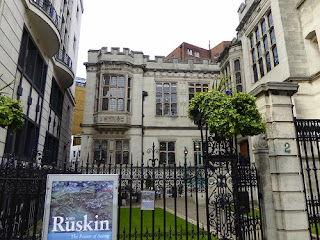 Downstairs in the exhibition, the looks were more sideways to influences than concentrated on Ruskin himself. But ascending the remarkable staircase - worth a visit in itself; it's all free - you hit two essential rooms. One is a recreation in homage to the museum Ruskin assembled in Walkley north of Sheffield, for the education of 'workers in iron' and other, concentrating on the natural history of the area. Sadly the original museum is no more, but it's been lovingly recreated in Sheffield, I believe, and this room, with the beguiling collection of minerals at its centre, was one big delight of the museum. 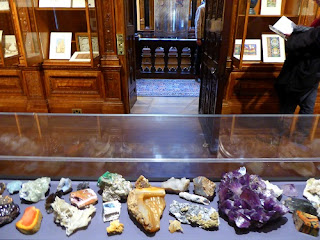 Then the pièce de résistance, space-wise. is the Great Hall with its Clayton and Bell windows of Swiss and Italian landscapes. 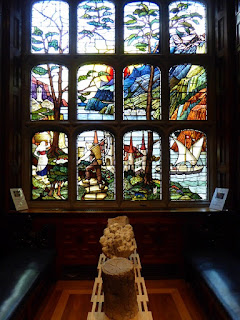 Here were lodged most of Ruskin's finest natural drawings featured in the exhibition, from the rocks of Chamonix to birds placed among representations by others (Audubon included) 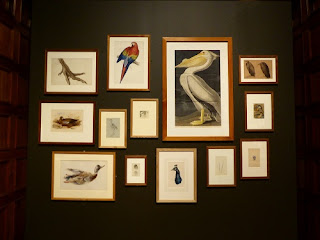 including an exquisite representation of a peacock's breast feather. 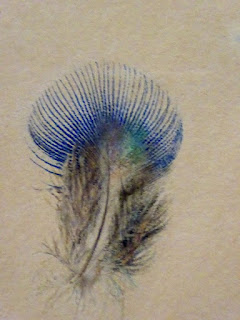 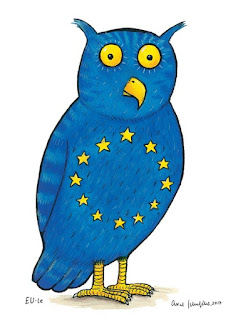 It's an EU-owl - the pun only works in German (EU-le). You might recognise it as the work of Axel 'The Gruffalo' Scheffler. He and other leading illustrators of children's books including Quentin Blake and Judith Kerr have responded, in the words of the blurb for the 12 Star Gallery's exhibition Drawing Europe Together, 'to make illustrated comments on the historical and possible future relationships between the countries of Europe, many of which are extremely touching and heartfelt.' Believe me, they are. And there was such a poignancy about the launch, for this was officially the last show in the 12 Star. Here's the artist speaking (I must get together more about the event, once I get hold of a copy of the book that accompanies it). 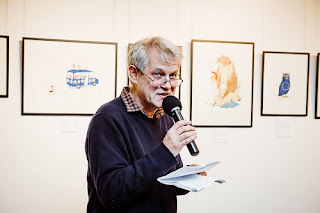 BUT. Not only are we not out, but one regional gallery decided the work was 'too political', so it got an extended lease of life. And now another, until 10 May, after Europe Day when we will be celebrating with the annual concert - here's a report of what we thought might be the last in 2018 - in St John's Smith Square (lined up whether we left on 29 March or not). 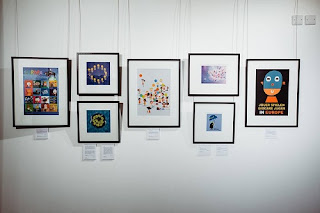 And meanwhile, here we are. Where exactly, philosophically speaking, is not clear, but still in the EU...
Posted by David at 17:49

The very excellent Naomi Fowler of Tax Justice Net has tweeted a detailed analysis by region, industry etc. of jobs lost "due to Brexit", 225,000 since the referendum. I despair of Labour wanting to protect jobs by, er, leaving the EU.

The Bonnard is a must see that I will probably miss, sadly. I did catch a rather crowded Mervyn Peake set of drawings at the tiny Viktor Wynd museum recently, and there is a talk there on Monday by Fabian (his grandson?) https://www.eventbrite.co.uk/e/fabian-peake-on-mervyn-peake-tickets-56408786198#tickets

Wasn't that whole thing about Ruskin and his wife a myth, or at least exaggerated. Looking forward to the Europe Day gig and many many more!

Thanks for the tip. Still clutching head at unrepentant Corbyn pursuing the dead end of trying to bash out a 'better' deal - the only sensible deal is not to leave. But we cease to be surprised by his mirror image of Mayhem's psychotic persistence. He has to go. Whom will you vote for in the European Parliament elections?

See you before that at the Europe Day Concert - if you arrive early you can get to see the charming exhibition in the 12-Star. Fun for all the family!

Peake - I need to read the Gormenghast trilogy first. Ruskin - si non e vero, etc. I needed it for my segue.

HaHa! a story too good to be checked, as I heard Gavin Eslar say recently interviewing the mighty Robert Wyatt, in Canterbury - where else? I don't think you need to read the overlong and unsatisfactorily anti-climactic trilogy to appreciate Peake's fantastic drawings, and his illustrated works are a delight, although Ruskin probably wouldn't have approved. No idea what his son (not grandson) Fabian will say but it will be fun finding out together with all 3 of my daughters which is a rare occurrence as one of them lives in Sydney and the youngest in Bath.

Must check out the Viktor Wynd Museum. Did Rowan go to Bath to study, then? And J says if you want to look at the drawings in the 12 Star you'd need to look well before 6pm because there's a reception for ambassadors before the concert (to which I am not invited either...).

Yes she is at Bath Spa on an acting degree course. We will try for the drawings but it may be twirly for us.

10 years ago now (how time does fly), we saw an exhibit of Bonnard late interiors. It was wonderful, and, while full of color, also left an impression for his expert use of white, of all things. What he did, he seems to me have done better than anyone, so hard to grasp where is cause for complaint. I do not like to think of a last exhibit at the 12 Star. Such a lovely gallery, and it should go on no matter what.

Yes - good point about the white on the canvas. I fancy too many of our art critics come from other spheres. There are some truly terrible ones on the broadsheets who write about the biographical background and nothing else. No mention of technique, or the inseparables of form and content.

As for the 12 Star, well, it will continue in some form: even if we leave, there may be a lacuna, but the phoenix will rise somewhere else...

Very glad to hear 12 Star will find a way to continue on.

Watch this space. The House of European Art (HEart) will find a way even if the Commission becomes a delegation.