And a darkling thrush sang on New Year's Eve 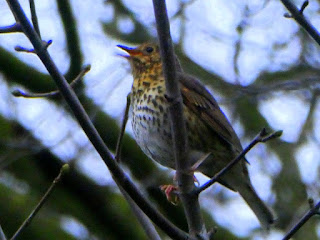 With a single suggestion, JohnG in his comment below brought a jangling deep in the brain to the forefont: the situation fits Hardy's wonderful poem 'The Darkling Thrush' to perfection. Like Hardy, I had my epiphany, on New Year's Eve when even the walled garden of Fulham Palace seemed bare of interest in the grey and cold; only a few sprouts remained to be taken off their stalks. 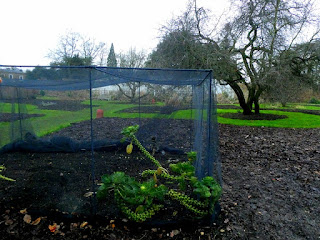 Anticipation of 11pm, last midnight for Britain as far as continental Europe was concerned, intensified a plunge in mood, probably the most intense I've felt for a long while.

Then, against the irritation of the parakeets' shrieking, I head a more liquid tone. Two films, too big to upload here, apparently, start with two of those green cheekies high up, though the prolonged singing is worth it. Eventually, I found the songster, and filmed it directly, even if only for 21 seconds.

The river scene could hardly have been more different from Christmas Day, when I made a quick bike trip near sunset. Thus the 31st 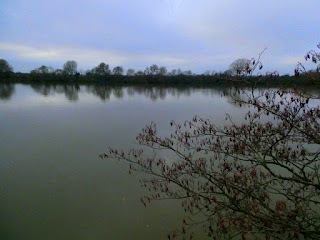 and below, the 25th - what looks like 'seven swans a-swimming', fitting for the 31st, is in fact seven Canada geese in convoy. I used to berate these populous birds with their nasty poo messing up the lawns at Kew, but I love to see them gliding and flying up and down the Thames. 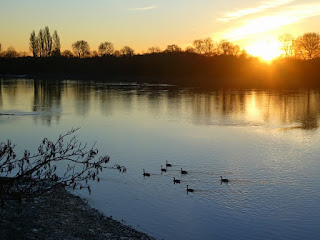 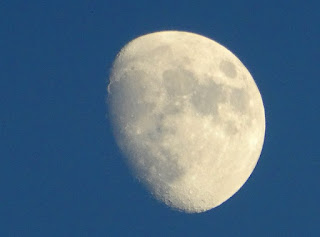 which somehow I still find more fascinating than the close conjunction of Saturn and Neptune - momentous because of the fact, but not in itself spectacular, two stars close together in the sky. With a telescope that would let you see Saturn's rings, sure.

Meanwhile there was an avian wonder to get excited about in a more recent stroll through Margravine Cemetery, very bird- and tree-rich. This bird, part of a flock flitting from tree to tree, I thought was a mistle thrush, as opposed to the song variety in Fulham Palace Gardens, but my ornithological friend Freddie says it's a redwing, like the ones we saw (but not so close) in the (now closed) London Wetland Centre the other week. In a couple of months, they'll fly back to Scandinavia or Iceland. 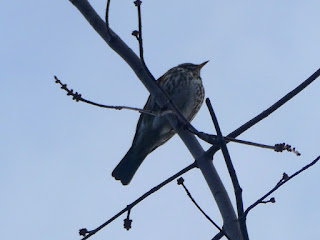 Old Brompton Cemetery is more spectacular to wander in than its Margravine counterpart, but less rich in diverse fauna. I did make a conscious effort to search for the first snowdrops, and found some where I always see them, to the left of the main avenue. 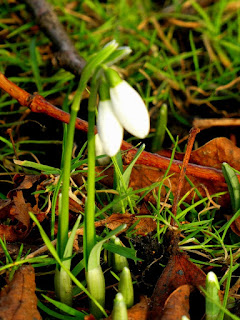 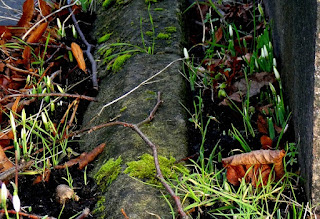 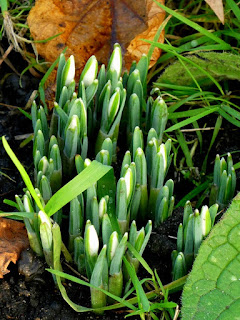 I even came across a solitary clump of daffodils; here's the sun lighting up one of them. 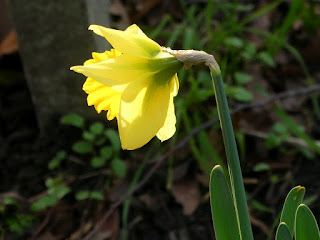 But I get ahead of myself, in more ways than one; my autumn photojournals are still not yet done, and I shan't give up. We need hope of more light at the moment, our darkest time in terms of another lockdown that's going to be the grimmest, even though there's more long-term hope. And I'm acutely aware of friends who are on their own. If you need a call and happen to be reading this, let me know.

Reminiscent of Hardy's 'The Darkling Thrush', David! Lovely photos... especially cheering to see the daffodil at the end. Wishing you all the very best.

Oh my, JohnG, I KNEW something was rattling in the back of my head - that's it! The Darkling Thrush! And now I can even change the title. Thanks so much for that.

Perfect observation in the poem, David. Hardy's poetry, if continuing the melancholy of Jude, is beautiful, and of its place. And Brooke's The Soldier owes everything to Drummer Hodge.

The cold snap has brought the redwings down from the north and into the garden over the past week. Always welcome visitors; they make short work of the cotoneaster berries which the other member of the thrush family seem to ignore as being too waxy. You spot one at work, and then when you look closer you realise there’s a mob of a dozen or so all in the same bush!

Charles, I owe it all to JohnG. I should have twigged (I use that word aptly) earlier - I developed a special love of Hardy's poetry in my first Eng Lit term at Edinburgh University. The only inspirational tutor I ever had in a tutorial was old Tom Creighton, whose edition of Hardy's poetry I still have, much annotated.

I now see redwings everywhere, or rather I did again at Kew today, but not close up as in the photo. Interesting that they like cotoneaster berries.

And thank you, Anne. Sometimes small mercies can seem like big ones, symbolically speaking.

How wonderful that you caught the beautiful bit of the thrush's song. Particularly welcome in these times. Over here, we listen for the flutey call of the wood thrush in spring. Nothing like it, so far as I know. Thank goodness, as someone else here has commented, for these small mercies.

Yes, for me the Hardy poem strikes home so immediately. There are claims that the thrush is metaphor for 'rebirth of the Christian faith', but the fact is it leaves you free to apply the 'message' to any kind of hope in darkness.