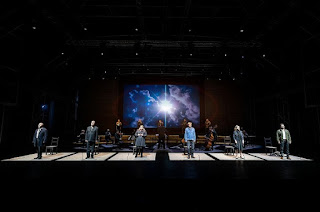 Zoom has been my salvation in 2020, and not just in terms of keeping financially afloat. To realise how much it's meant not just to an ever-expanding group of students but also to the great performers who so generously found the time to make special guest appearances has been (and I don't use the term lightly) humbling. We've had wonderful appearances from Sue Bullock, Anne Evans, Richard Jones and John Tomlinson (captured below, looking more Gurnemanz than Wotan - he was in fact talking Hagen - at the class by a student) over the 10 Mondays on Wagner's Götterdämmerung, completing our Ring survey over three and a half years. In the latest Russian music term covering 1910 to 1917 there's been enlightenment on Stravinsky's Petrushka from Gergely Madaras, on his Rite of Spring from Andrew Litton and Catherine Larsen-Maguire (extended to two whole classes), and on Scriabin from Alexander Melnikov and Peter Jablonski. 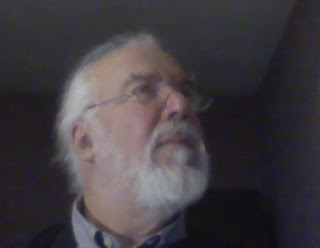 For all of us involved on a regular basis, it's given a shape to the week, and for many, an alternative to live performances (for which, of course, there's no real substitute, but needs and circumstances must). Take the two one-offs on the Tchaikovsky ballets - The Sleeping Beauty on 30 December and The Nutcracker on the 21st. They came about because one student lamented that she would no longer be able to go to any of the planned, socially distanced Nutcrackers given the third, and severest, lockdown of the year. We could at least share our pleasure in the beauties of these amazing masterpieces. I can't resist featuring again the late, much missed Maria Björnson's most ravishing design for the Royal Ballet Sleeping Beauty that came in for so much stick (I hymned the whole achievement on the blog here). Watched the entire DVD again yesterday and for me it's still the most magical Beauty. This is the Panorama from the second act, turned into a winter's tale. 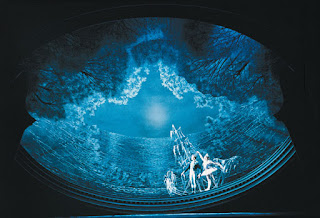 These were also interludes between terms on Russian music - the first two have taken us from Glinka to Prokofiev's observations on the end of 1917, while the next covers 1917 to 1953, mainly but not exclusively Soviet (we have to follow the adventures of Prokofiev and Stravinsky in the west, too). I planned the Opera in Depth term to begin on 11 January with Beethoven's Fidelio (image up top, of the excellent Garsington Opera concert staging, by Johan Persson) and its original version, Leonore - on the special urging of Mark Wigglesworth, who's just conducted Fidelio for Opera North and wants most of all to 'do' Leonore at English National Opera - before moving on for the following five Mondays to Prokofiev's The Fiery Angel; as far as I can remember - and my records are still stored on the previous computer which went bust - I haven't covered it in over 30 years of Opera in Focus/Depth and it would tie in with what we're doing in the other course. It's also unclear what the main companies will be staging, so why not take advantage of an opera that's not appearing in any repertoires for the foreseeable future? By summer it should be clearer what the two last operas of the season should be.

Here's my planned itinerary for Russian music 1918-1953, subject to change depending on circumstances and special visits. Pictured below: Nikolay Myaskovsky and Sergey Prokofiev, friends born 10 years apart, in 1927, detail of a photo taken from the first volume of my Prokofiev biography (sorry to link to Amazon, but my online seller of choice, hive.co.uk, reports it out of stock). 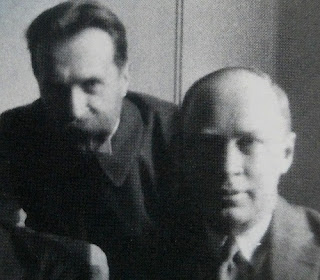 Prokofiev travels to America while Myaskovsky stays at home and remains true to his characteristic moods of gloom and pessimism. Myaskovsky's Fourth and Fifth Symphonies contrasted with Prokofiev's shorter works of 1918-19 and the exuberance of The Love for Three Oranges.

Stravinsky's Russian trilogy begins with the small-scale experiments of Renard (Baika) and L'Histoire du soldat. Ever the seeker after novelty, Diaghilev engages a fresh range of artists to work with composers old and new. With special emphasis on Prokofiev's Chout (Larionov design pictured below) followed by Stravinsky's Pulcinella and Les noces (Svadebka). 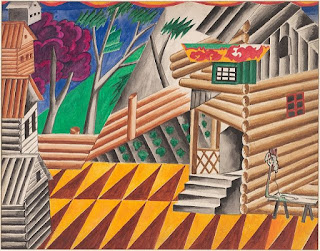 With a prefatory look at Myaskovsky's biggest and darkest symphony, the Sixth, followed by the First Symphony with which the precocious teenage Shostakovich, Petrograd/Leningrad Conservatoire student, burst upon the scene. His first total masterpiece, the Prelude and Scherzo for string octet, is followed by a singular marking of the 10th anniversary of the October Revolution in what became known as his Second Symphony of 1927

The apogee of Soviet modernism, still strongly connected to developments in the west. We look at machine-age music by Prokofiev, Mossolov and Deshevov, and through Prokofiev's detailed diary entries for his first visit to the Soviet Union in 1927 look at the young musicians whose music he heard while he was there, chief among them Gavriil Popov with his remarkable Chamber Symphony.

The young Shostakovich's reputation continued to grow with his wildly expressionistic opera The Nose and his two full-length ballets, The Golden Age and The Bolt - though proletarian musicians' organisations were now on the attack. 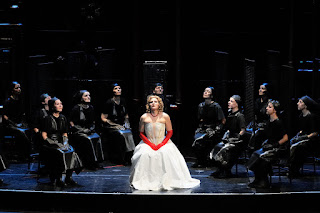 The move to bring the querulous proletarian musicians' groups under one banner, the Association of Soviet Music, in 1932, looked like a good thing at the time, though it spelled trouble ahead. Shostakovich's Lady Macbeth of Mtsensk, completed at the end of that year, ran successfully in Moscow and Leningrad for two years before the blow fell with the Pravda attack on it in January 1936. Still he pressed ahead with his outlandish Fourth Symphony, but it was withdrawn before the scheduled public premiere at the end of the year. With special guest Elizabeth Wilson.

Shostakovich worte his first film score for Kozintsev and Trauberg's New Babylon in 1929; Prokofiev worked on Feinzimmer's Lieutenant Kije four years later before becoming a true Soviet artist in 1938 with his music for Eisenstein's Alexander Nevsky. With clips from those films as well as Alone, Counterplan and Volga-Volga.

Picking up on the first Russian symphony to cause real controversy, Popov's First, performed in 1935, we see how Shostakovich followed a superficially safer trajectory in his Fifth before ringing the changes in the Sixth. We end with Prokofiev's own special circumventing of socialist-realist formulas in his Fifth, premiered at the beginning of 1945 and seen (wrongly) as a victory symphony. Pictured below; Prokofiev, Shostakovich and Khachaturian in 1940. 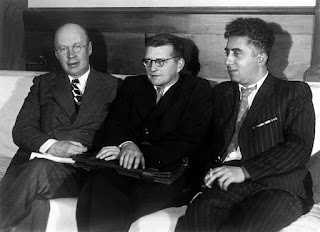 Shostakovich's new journey in chamber music began with a kind of neoclassical purity, but Russia's dramatic entry into the Second World War opened up freedom in music again: the Second String Quartet and Second Piano Trio mark a dramatic change in course. Alongside them we also look at Prokofiev's so-called 'War' piano sonatas (6-8).With special guests Steven Osborne and Boris Giltburg.

Two more towering symphonies, Shostakovich's Eighth and Prokofiev's Sixth, dare a naked sense of despair. After the war, it was time for the authorities to turn the screw again, which they did with Zhdanov's notorious trials of 'formalism in music', banishing the possibilities of dissonance and anguish expressed in music. Pictured below: Shostakovich in Leipzig, 1950. 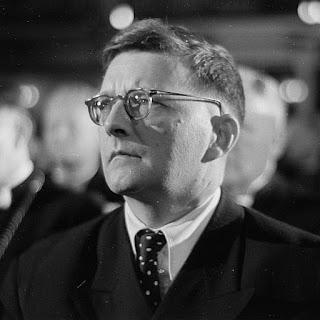 I can see from this that I haven't managed to fit everything in: there will be two extra classes on Prokofiev's War and Peace. If anyone wants to join who isn't already on my list of students, just leave a message here with your email address. I won't publish it, but I shall certainly reply.

I want to second your comment, particularly, as a delighted, continuing participant, that "it's given a shape to the week, and for many, an alternative to live performances (for which, of course, there's no real substitute, but needs and circumstances must)." And a marvelous shape it has been, and from what you describe here, clearly will be. Thank you!

Thanks as always, Sue. Your email feedback after every class has been so welcome: you usually hit on what I've found special in each case. And roll on the special guests. Mark W is certainly committed to showing up for Fidelio/Leonore, and I have some folk in mind for the Russians (not all Russians themselves, but predominantly so...)

Well as you know you are my Christmas present. I enjoyed the two extra sessions on The Nutcracker and Sleeping Beauty immensely and asked my own Father Christmas for the upcoming courses. So looking forward to them.

I stumbled upon your Symphony and then Russian Music Classes and Opera in Depth Classes fairly early in the first lockdown David, and they have been amazingly good. Your enthusiasm, passion, insights, humour and deep knowledge - together indeed with the wonderful special guests you have brought in - have helped me fall in love with some music I either knew little or not at all; and to appreciate much more keenly and deeply some music I already knew to some extent. It's been a great adventure and journey so far, and I am really looking forward to the Classes for this coming term - Thank You. Neil

Now those are the sort of accolades one dreams of - thank you. Though it's not humblebragging to say I've also been really touched by the regular emails I've been getting of what these courses mean. The music is bigger than all of us and keeps us going! Thank you both. Neil, everybody, is IMMENSELY knowledgable and knows a lot of Russian rep I don't. And Will has seen a thing or two around the world - his last Fidelio was in Reggio Emilia with Abbado conducting. What I wouldn't have given to see that.

For those of you who stumble across this blog by David: I cannot urge you ENOUGH to subscribe to his courses! He has a great speaking style, and the guests and other students are amazing.
I am so glad I accidentally came across this myself late in 2020....both the opera course and the Russian music course are very much worth the time and money!
Kirk in California

Thank you so much, Kirk (no money passed hands for that eulogy, honest!) My American and Canadian students are the most supportive and vocal, it seems...