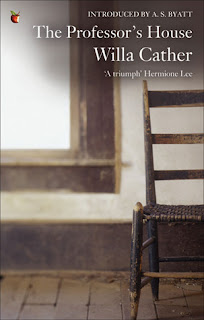 Hermione Lee is unequivocal in her admiration for Willa Cather's novels of the early to mid 1920s, which form a kind of triptych - two side-panel novellas, suggestive character studies of ambivalent women slightly outside the pale of convention in A Lost Lady and My Mortal Enemy, and a central masterpiece of structural and emotional richness. The Professor's House. In her study of Cather, which is much more literary criticism than biography, Lee declares that she admires 'that dark phase of Cather's writing above all the rest' and is less compelled by the more distanced narrative of Death Comes for the Archbishop. I'd be hard-pressed to choose between Professor, Archbishop and the lost young man who is One of Ours. (Below, Cather photographed by Carl van Vechten in 1934). 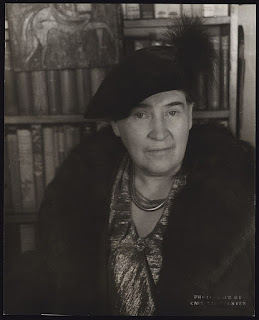 As I mentioned in my last post including a second look at Catheriana, perhaps these three novels strike a special note with me because of their intense depiction of male relationships which, in the cases of One of Ours and The Professor's House, could be seen either as intense romantic attachments or something with a more homoerotic element under the surface. It's fascinating to find Cather, a lesbian writer whether practising or not, exploring the possibilities of repressed sexual love between men. What she does is to build up a picture of masculine beauty - Claude Wheeler and the Professor's beloved Tom Outland - and then leave it to us to elaborate on what kind of love develops in Claude's late discovery of the sensitive violinist at the Front, his perfect other half, and Tom's intense friendships with Rodney Blake and Godfrey St Peter.

The form of The Professor's House, pitting discontent with bourgeois domesticity against (eventually) the wide open spaces of America's south-west, is surely the most daring in all Cather's novels - indeed, in novels across the board. St Peter is reluctant to give up the solitude of his attic study in an old house though he has moved with his family to a brand new one. There's a typical ambiguity at work which hovers between contemplation and the 'double life' of a supposedly 'happy family'. The link with Godfrey's adored Tom, who's died, like Claude, at the Front, is the tawdry legacy of an invention which brings no happiness to the relations between St Peter, his daughters and their husbands. Left alone when the rest of the group goes off to Paris with the summer, the Professor meditates on his young friend's journal about a discovery of a different sort from a time before they'd even met - that of a native American settlement of considerable sophistication, the so-called Cliff City on the Blue Mesa. Cather has been to a landscape like this before, with Thea Kronborg on  avacation that changes her life in The Song of the Lark, and there are equally beautiful descriptions of monumental scenery in Death Comes for the Archbishop. 'Tom Outland's Story', introduced at the novel's two-thirds mark, transforms us, and it has a radical effect on the Professor's life in the short final section of the book, which draws all the strands together with masterly skill. Having had my reading spoilt by spoilers in Lee's study of Cather - I had to keep putting it on hold while I caught up with the books she'd reached - I don't want to say more. 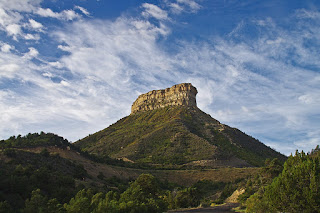 Besides, A Lost Lady and My Mortal Enemy are too brief and in some ways too delicate to dissect. Their heroines are a mixture of beguiling and conventional (Mrs Forrester, who becomes 'lost' in the course of the novel and over a passage of time), shrewd and spiteful (Mrs Henshawe, her own worst enemy). A Lost Lady focuses on a Red Cloud acquaintance of Cather's, and stays in Nebraska to chart the changes the author deplored. And there is shocking violence early on here, perpetrated on nature by a bully boy who will return to take charge in Part Two (Cather must have witnessed, or heard about, the action - too gross to be made up). My Mortal Enemy is split between a visit to New York and a bleak second part set in a west coast city. The observers are younger people who see only the angles of the whole, preserving an element of enigma about the protagonists. The control of narrative is masterly. And so on to the last two major novels in which Lee senses a decline - though she makes them seem fascinating enough to merit a last foray.

Labels: A Lost Lady, Hermione Lee, My Mortal Enemy, Nebraska, One of Ours, The Professor's House, Willa Cather

Thank you for this wonderful advocacy, David. I've never read any Cather. Would The Professor's House be a suitable point of departure do you think?

It depends what aspect of Cather interests you most. The Professor's House and Death Comes for the Archbishop are stylistically the most impressive. But with your interest in music, I'd start with The Song of the Lark, because its compendious nature covers so many of Cather's preoccupations, and for me it's one of the best books on the artist's calling - its heroine, Thea Kronborg, becomes a great Wagnerian soprano.

Many thanks, David. I've actually gone for The Professor's House.

I hope you're hooked and go on to read many more...I just have the last three left.

Thanks to your advocacy, I’ve realized how impoverished I am when it comes to appreciation of Cather. I loved My Antonia when I read it long ago, but there I stopped. Just now I’ve taken up The Song of the Lark and am enjoying it immensely. Cather’s sense of place, alone, makes me wish I could be transported to the landscape she describes (if, indeed, it exists any more), and that is only the beginning of the marvels of the journey on which this novel takes us. I do wonder why, in school, we weren’t encouraged to explore more Cather.

Hurrah! It was a revelation to me last year, thanks to ALex Ross in the first place, to find that she is one of the great novelists, and not just among Americans. Every journey she takes us on gives a vibrant sense of place (in My Antonia's case, of several places) - she is to American landscapes what Dickens is to London. I'm just finishing a late work, Shadows on the Rock, which paints old Quebec in so many ravishing colours.