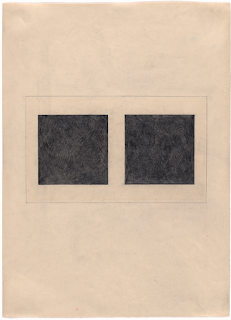 The teenage Shostakovich entered the third term of my Russian music Zoom course three Thursdays ago with the audacious gambit of his First Symphony, which I managed to link to more Myaskovsky (the Sixth, his biggest and darkest symphony, took up the first third of the class, though the link to Shostakovich 1 was a passage in the finale of the Fourth). I've always had a problem hearing Shostakovich's first symphonic flourish placed at the end of a concert: the first two movements are brilliant and immediately characteristic, the third sludgy and the finale flailing - as I always found even before I knew he had real trouble ending the work.

Though shorter, the first Shostakovich outright masterpiece, I'd say, is the Prelude and Scherzo for string octet. It's up there with Mendelssohn's and Enescu's achievements in the same genre as teenagers, though very different in mood. I played the students just the end of the opening piece and the whole of the scherzo in a hell-for-leather, biting performance by the Borodin and Prokofiev Quartets, and the response was wildly enthusiastic. That's on YouTube, but oddly not downloadable. I searched others, and the most rewarding - visually as well as aurally - is this distinguished line-up from the Utrecht Festival. The Scherzo starts at 6m03 if you want to cut straight to the frenzy.

The same was true of how they reacted to the slow movement of Gavriil Popov's Chamber Symphony (Septet), composed in the same year as the Shostakovich work was premiered. In the next class I focused on the year 1927, the high watermark of Soviet musical experimentalism, when the influence was still international (I'm quite pleased to have found a Malevich from that year, reproduced up top, which chimes well with the two finds). Shostakovich's octet pieces were merely premiered that year, but so much else can be shoehorned from a variety of styles - the 'mecanique' imported from France, post-Honegger Pacific 231, in the shape of Mossolov's Zavod with its anvil and metal sheet (I also followed up on Prokofiev's Second Symphony and Le Pas d'acier first), the percussion-only scherzo from Alexander Tcherepnin's First Symphony (actually premiered in Paris), Roslavets' near-atonal Third Piano Trio and the various pieces that Prokofiev heard the younger generation play on his first visit to the Soviet Union early in the year.

His first acquaintance with Shostakovich was to witness the young firebrand play his First Piano Sonata. and he found it a relief in duller company; he thought Deshevov too insistent with his repertoire, though admired its humour (cue the short piano piece Rails); and got a sense of Popov's incredible talent. The outer movements of the Chamber Symphony have something in common with Prokofiev's own Quintet, composed for Boris Romanov's ballet Trapeze back in 1925, and owe a lot to French chamber music of the time. But the slow movement is unique, I think, especially in the rocking, bluesy passage which appears twice, perhaps the first hint of jazz in Soviet music. You may want to hear the whole thing, and another Dutch-based performance here, this time conducted by Valery Gergiev in Rotterdam, is good to watch; the slow movement begins at13m14s.

That cued the jazz which briefly flourished, partly due to the Leningrad premiere of Krenek's Jonny Spielt Auf (Jonny Strikes Up). So we ended with Shostakovich's arrangement of Youmans' 'Tea for Two' from No, No, Nanette, popular in Russia as 'Tahiti Trot', and one of the companion pieces with which it shared a concert, an equally wacky Scarlatti sonata arrangement. Since then we've moved on to The Nose, The Golden Age and The Bolt; the blow is about to fall next Thursday.

One of the good things about our present situation is that I’ve been able to join in your courses. I’ve said for years now that I envy people who have had the opportunity in the past and now I’m amongst the enviable.

I only wish I could enjoy Myaskovsky as much as others seem to, however it would be a dull world if we all had the same taste. As to the Shostakovich pieces that you introduced us to - they are wonderful discoveries. What has surprised me is that others far more musically educated than I were unaware of them and I’ve had the pleasure of introducing them to the works. And I want to investigate the Popov catalogue a bit further.

I really must thank Father Christmas for the gift and you for making it one of the best gifts I’ve received in a long time.

How kind, Will, and you contribute a lot to both classes: you've seen and experienced so many performances around the world.

As you know, I label Myaskovsky second-rank, sometimes second-rate but interesting, especially as until Shostakovich came along he was regarded as Russian symphonist number one, not least in America.

I'm investigating Popov's First Symphony because it chimes with 1932, where we pick up next week. His last experimental score. It struck me that thoe who showed the most anything-goes promise in the late 1920s were the hardest hit. Kabalevsky and Khachaturian only really got going in the 1930s, and remained middling-reliable. The real amazement is in how Prokofiev and SHostakovich constantly adapted: only the top geniuses did.

Now you need to persuade Father Christmas to join you on the same screen, since Santa still seems unconvinced by the complexities of Prokofiev's full-time return, and I want to defend my main man properly...

I echo what Willym has said about your classes as a wonderful silver lining in an otherwise difficult time. I enjoyed particularly, about the class you're describing, following on with setting up my own little program of the three string octets you noted. And it was fun to pass on the Shostakovich Octet to a chamber music-loving friend who, it turns out, had not heard it before (as I hadn't either). Thanks, too, for spotting the Utrecht Festival performance and putting it where we can all find it. This week's class offered another fascinating chapter, and of course, as you say, the blow is about to fall in the coming week. That's going to be quite the double-header.

You two have been wonderful at spreading the word about these great works and others. Here are the links, first to Sue's latest post:

You see, sometimes one does make REAL friends online!

Have you heard Myaskovsky's string quartets? I got hold of the Taneyev Quartet's recordings on Russian Disc a while back, and found the works very impressive. I even wrote about the CDs on a certain website (let's call it A.com), to spread the word about them. Unfortunately, A.com decided recently to be evil and deleted all of my reviews from Day 1, with no warning or justification to me at all, including my reviews of the Myaskovsky string quartets. That aside, I hope one day to give his symphonies a listen, from start to finish. From the recordings that I've heard of other scattered Myaskovsky works for orchestra, apart from the string quartets, I would perhaps paraphrase Richard Strauss to say that if Myaskovsky is not of the first-rank, he falls into the first-class of the second rank.

I think Strauss was doing himself down when he put himself in that category. If so, Myaskovsky would be second-class of the second rank. But let's say Strauss IS first-class, then yes.

I've only heard a couple of the Myaskovsky quartets, and wasn't paying attention. I'll try again. Still building up the complete Svetlanov edition of the symphonies, though you might do best to buy the big box if you don't have individual instalments alread.

And I wonder why on earth Amazon did that? Sounds as capricious as LinkedIn. I'm using hive.co.uk now for most of my book purchases, though sometimes one needs Amazon as an intermediary for smaller dealers.