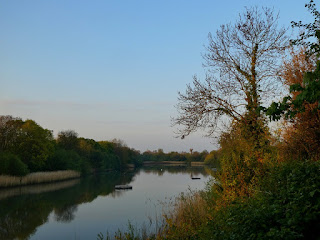 2 May is International Dawn Chorus Day, but three of us decided to steal a march by rising at 3.30am on the First and meeting at 4.50 by the Waterman's Arms Pub on the Thmes embankment at Barnes to progress to the fabulous Leg o' Mutton wetlands/nature reserve, open 24 hours.

Getting up to greet the dawn is a rare occurrence for me, but I'll never forget the previous occasions when I did so - for the Aldeburgh Festival's Messiaen bird day, with Pierre Laurent Aimard playing the Catalogue d'Oiseaux over four concerts in different locations from dawn to midnight, and for the Göttingen International Handel Festival's sunrise concert, a ghostly (because so quiet) clavichord recital in a room overlooking a lake.

I remember walking through the streets of Göttingen in the dark, the silence occasionally punctuated by a blackbird song. It was much the same when I got on my bike two Saturdays ago. The moon was still bright above the central gardens of home (if not quite in focus here - remember, it was 4am and I wasn't quite sharp myself), 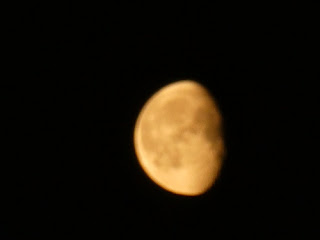 blackbirds and robins were up and about at any green spot I passed, and three foxes crossed various roads in front of me. At my favourite spot on the Thames, the eyot, there was the sleeping swan by the reflected patch of moonlight 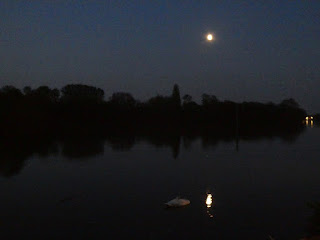 who on my cycle back from Kew Gardens the previous afternoon, when I was detained by high tide at the same place, had come up to me and hung around while I waited for the waters to recede. 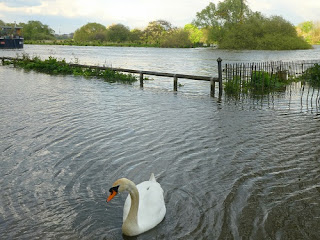 I'd collected Cally from her house in Chiswick, so she's pedalling along in front here 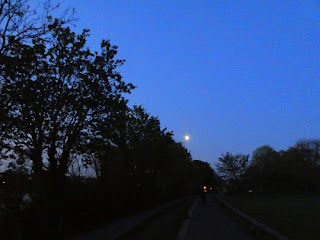 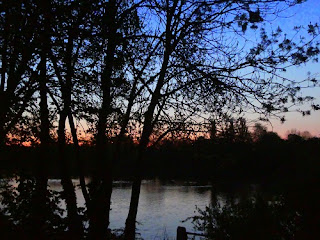 and became more apparent as we took our bikes up and over the Barnes foot- and rail-bridge, moon on one side, 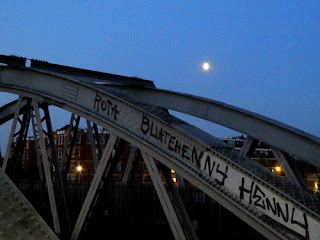 and pre-sunrise on the other. 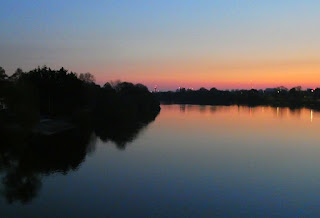 We met friend Freddie as planned outside the Waterman's Arms, then walked with the already loud music of song and mistle thrushes to our right to the Leg o' Mutton. I wish the short films I made reproduced anything like the variety of sounds we heard; I won't put any of them up because, though a persistent wren is very entertaining close by, you can't hear the warblers among the reeds in the distance. Sedge and Reed Warblers' songs are unfamiliar to me, but I was happy to have it confirmed by Freddie that the four piercing short notes and a long I kept hearing around the Wetlands Centre were those of the Cetti's Warbler, now happily on the increase. We went down to the shore to get closer to them 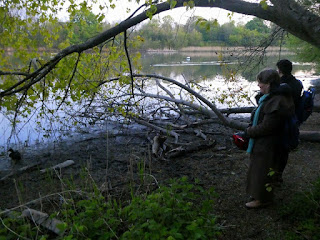 and found a mallard of indeterminate colourings with four chicks waddling through the mud into the water. 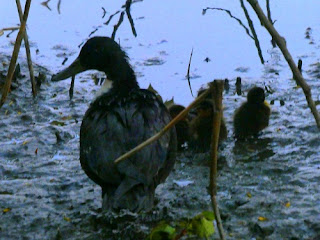 A fox sat nonchalantly by a bench ahead of us and only ambled off when we got closer, while a Great Spotted Woodpecker was heard and then seen to our right. My shot isn't as focused as the ones from the Margravine and Old Brompton cemeteries, but it's ocular proof. 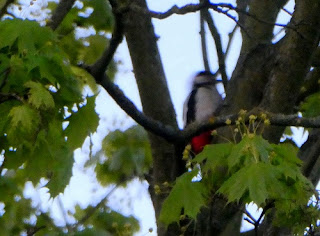 The scene itself was perfectly beautiful, with the sounds an enrichment. 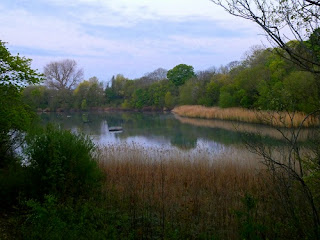 Then the first rays of the sun hit tree branches at the east end of the lake (time: 5.50am) 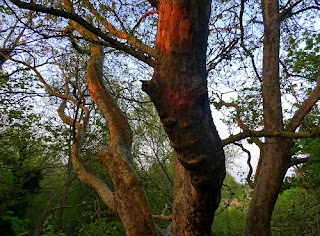 and it rose as we rounded to the quieter, river side of the reserve. 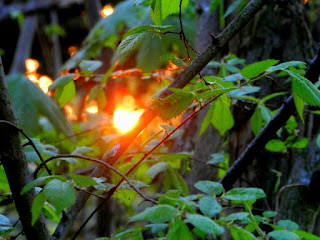 The moon was still visible through light cloud opposite 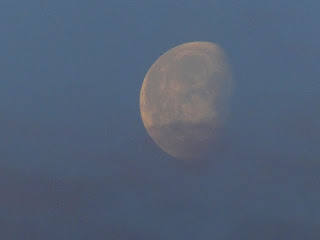 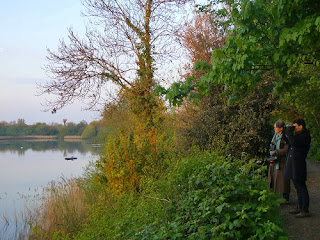 we decided to sit on a favourite bench, drink our coffee and eat our bananas. The sun's warming powers were remarkable and the inhabitants kept delivering. A Greenfinch flitted above, Long-tailed Tits below and on the stump behind a Chiffchaff sang.

Freddie regaled us with an account of its extraordinary journey from the Sahel, where it overwinters. You might like a still of it too, turning demurely away. 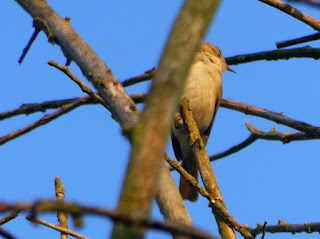 Our twitcher, or birder, was especially excited to spot a Stock Dove some way ahead on the path. A more usual but nevertheless beautiful sight and sound was a swan swift-landing. This is merely a glide shot, background to young beech leaves. 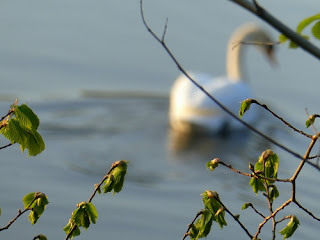 The light was getting stronger on trees, reeds and water, 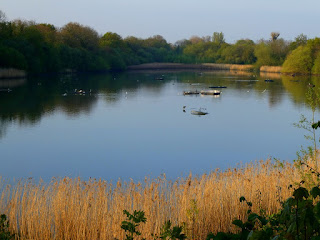 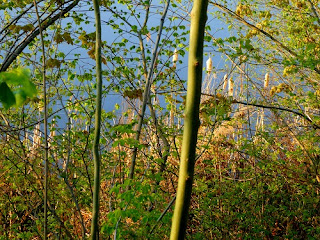 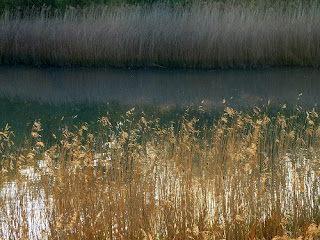 with a heron flying in and out 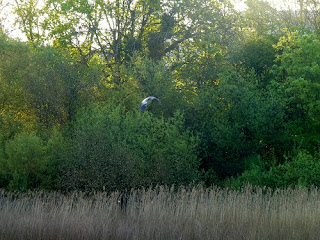 and opposite where we started, Reed Warblers were especially lively in three different spots. I even got a blurry shot of one, not easy as they're in constant flit. 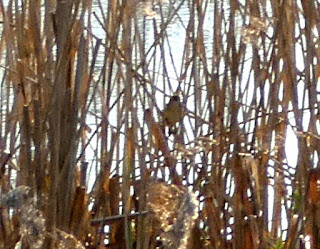 At the exit, we took a look at the board of sightings over the past month 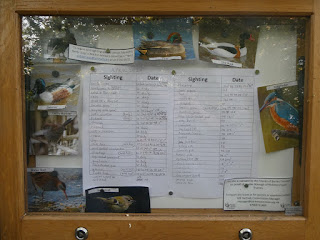 and found they tallied pretty much with what Freddie reckoned. This is his record, covering everything.

Dunnock (heard, not seen, but our regular back yard visitor is back) 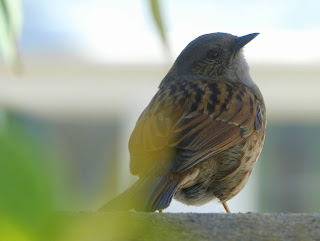 Wren
Robin
Carrion Crow
Jackdaw
Magpie
Blue Tit
Great Tit
Long-tailed Tit
Goldfinch (also seen in the back yard, but the Niger seeds I've put out have not been touched) 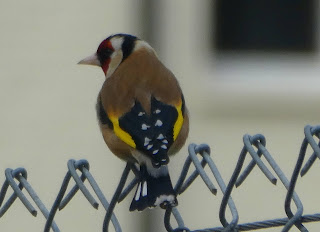 Reed warbler
Chiffchaff
Blackcap
Freddie was especially chuffed because just as we were walking along the Thames embankment towards Barnes, a Common Sandpiper took off. Amazingly, we'd been at the reserve for four hours, so there would be breakfast options - happy to take the one at Gail's, where the croissants were still warm, and we sat on a bench by the pond as the bric-a-brac Saturday market was unloading. Nothing much to see there, but I was delighted with two purchases at the farmers' market over the road - an exquisite assortment of tomatoes from the Isle of Wight (hurrah for The Tomato Stall), and thyme-and-fir honey from a Cretan seller. One final note as we were leaving the pond: a seagull swooped and grabbed a duckling. That's nature for you.
Posted by David at 22:17

TRIFFIC, David, and such an education. (I always think a green woodpecker is my father. It turned up passim just after he died, in 2000).

I'm wondering if we know each other (or whether you wish to remain as U N Owen). I can oblige with much better shots of a green woodpecker my next Kew chronicle. I sometimes feel my dad is in the blackbirds, fanciful of course, but it does me good.

Thank you for taking me along with you. I do wish I were more inclined to rise early - I do occasionally and sunrises here can be quite the spectacle. Our little Island is filled with an incredible variety of birds and fortunately there are seven or eight photographers who publish daily spots of many of them.

As always wonderful photos and words to take us on a journey.

Thanks, Will - after this I even thought I could perhaps do it once more this late spring, but maybe the one-off is what makes it feel a bit mythical. I do recommend it as an annual experience, but you need to make a proper excursion of it, pack flasks of tea and /or coffee and something to eat. Then the weather needs to behave and the sun guaranteed to be visible in its rising...

Thank you for sharing this with us. What an amazing excursion, and beautiful text and photos.

Hope it isn't rubbing it in too much since Henrik wasn't able to join us, and would have loved it...he was telling me about peregrines on a high-rise and I was able to match that with tales (and pics) of the ones I spot on the top of Charing Cross Hospital from the Margravine Cemetery. In fact it was the driving forces of the Hammersmith and Barnes Peregrine Assoc whom I met in the churchyard abd who told me about the Leg o'Mutton.