About some of today's players 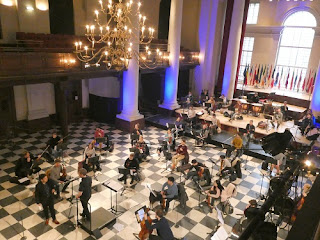 Happy Europe Day! Please tune in to the 12th Europe Day Concert livestreaming from St John's Smith Square. This is Jonathan Bloxham's fourth as conductor, and he's assembled an army of generals. Many are as much stars in their own right as our tenor, Luis Gomes. As I was climbing the spiral staircase to the gallery for yesterday's afternoon rehearsal - as co-curator I had the privilege to join a handful of others - I heard Luis let rip with a golden top note in the aria from Godard's Dante. and the tears started to flow (quite apart from anything else, I haven't heard live music other than five singers in a church since December). 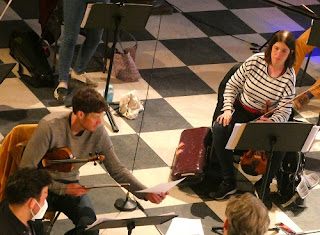 So let's meet some of the talent. Pictured above with the heads of Luis and Jonathan are Thomas Gould of the Aurora Orchestra and Sini Simonen of the Castalian Quartet (Finnish). Kate Suthers leads the seconds as she does those of the City of Birmingham Symphony Orchestra. Here's a ten-second clip of violins blazing in a well-known passage during the rehearsal: Jonathan worked so hard on projection in this official finale.

Principal viola is Tetsuumi Nagata of the Piatti Quartet, who often plays with the Nash Ensemble, Cellist 1 Tim Posner, sometime principal of the Deutsche Kammerphilharmonie Bremen. The double basses are Estonian Siret Lust, regularly in the Philharmonia, and Thomas Wynter whom I last saw online in Chineke!'s Wigmore chamber concert. They're pictured below with Lorraine Hart playing the cor anglais and cellists Steffan Morris and Peteris Sokolovskis. 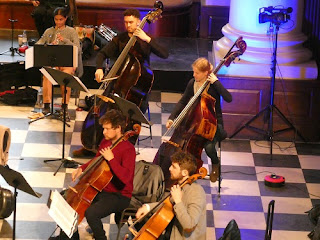 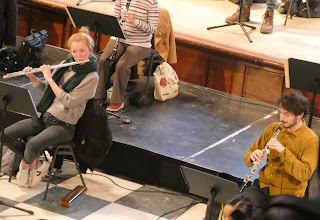 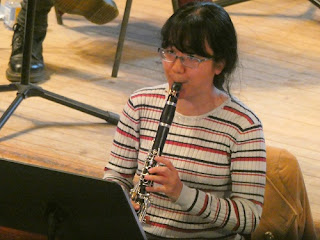 Nikolaj Henriques (so young looking!) is principal bassoon of the City of Birmingham Symphony Orchestra; he also played in an earlier Europe Day concert when he was principal of the European Union Youth Orchestra. Among the brass - with the luxury of four horns this year, essential for the Sibelius stunner which launches the programme, trumpeter Richard Blake, also CBSO section leader and trombonist Pete Moore, LSO co-principal and once youngest ever BBC Young Musician of the Year. 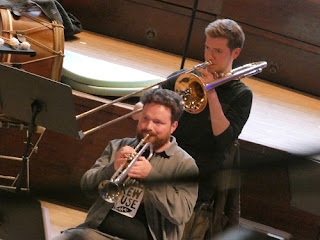 12 European countries are represented within the orchestra, and nine European composers in the programme. It's going to be glorious. Be there online at the time if you can; if not, watch later. 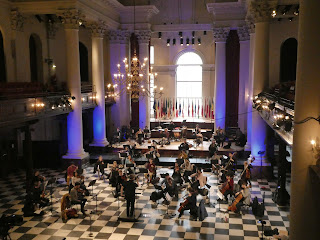 Finally got around to watching the Europe Day concert, although I confess that I took it in piecemeal rather than one continuous go. (I did the same with the LSO/SSR all-Stravinsky online concert video.) Very, very fine concert indeed, especially given the modest number of strings and thus potentially odd balances, which no doubt the engineers mitigated. I recognized Sini Simonen from the Wigmore Hall online pandemic-era concerts by the Castilian Quartet, of whom I'd not known prior to the pandemic. If there was a modest "disappointment", it's that Ester Magi's "The Sea" seemed to end too soon, just as it seemed about to take off into more music. One tiny program note gaffe was the slight misattribution in the Johann Strauss 'Vergnügungszug' of the "special role in the proceedings" to the conductor, where that "special role" actually fell to Elsa Bradley. But like our new and most excellent President's verbal gaffes, quite forgivable :) .

I wrote the programme note at a time when Jonathan was fully intending to sound the 'special role' himself. He only decided to delegate at the last minute, and the pdf couldn't be corrected at that late stage. So not exactly a gaffe.

Not sure I agree about 'The Sea' - I think its ending was perfect after the big climax and, though the piece could have been longer, its portmanteau 'La Mer' quality was so admirable.

I can also guarantee that the energy of the string playing came across amazingly in the hall (I was at a rehearsal and one of the four involved sitting upstairs at the performance). I'd noted at the rehearsal that the only slight smothering was in the 'New World' finale but Jonathan then worked really hard on some of those passages - I think there's a very short clip of one in the blog entry below this one.