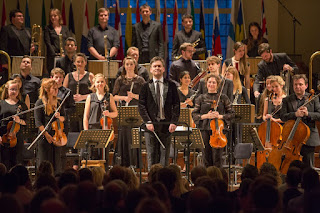 Sadly for the first time it will be without a live audience - we miss the cautious opening-up on 17 May by not much more than a week - but it's way better than nothing (the situation last year). Jonathan Bloxham will actually be playing the cello on the 17th in a Newcastle concert with tenor Ben Johnson and pianist Martin James Bartlett, in that same light and airy church where I so relished a day of events last autumn. Before that, he takes charge of this, his fourth Europe Day Concert and the 12th since the series began. We need your (free) viewing to convince the bureaucrats of its worth and support. And how could it not be superb, given what Jonathan and his Northern Chords Festival Orchestra of top young professionals - Thomas Gould will again be the leader, as he was in 2018* - achieved in those previous concerts?

My genuinely eulogistic words about delicious prospects have gone up on various slices of publicity, including this one, which gives a link to watching the concert on 9 May at noon UK time, but there's no harm in expanding here. I should at least reiterate that the star soloist, since Portugal holds the presidency, is tenor Luis Gomes, former Royal Opera Jette Parker protege now singing Verdi's Alfredo and Puccini's Rodolfo around the world. 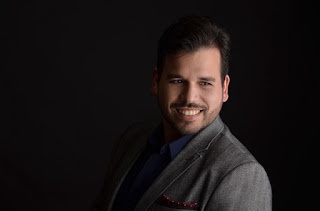 Here's the full programme, which I'm proud to have worked on (as a pure labour of love, of course) with Jonathan. The 'journeys' theme is reflected throughout.

I'm especially happy with the sub-theme following Dante's Divina Commedia in three arias loosely connected to Inferno, Purgatorio and Paradiso. It was Luis who came up with the aria from Godard's Dante, and we're hugely grateful to the Palazetto Bru Zane, a wonderful and obviously well-funded enterprise, for being so obliging with the music. I realised I had the recording sitting at home so far unheard. and it's a pleasure throughout. 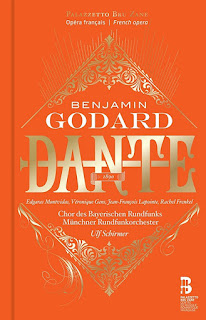 Godard was a musical conservative, proud of never having opened a Wagner score, and his trump card is a kind of virginal candour which works well with the character of Beatrice. The last act is the best, with good parts for four singers, the third - attempting to do a whistlestop tour of Inferno and Paradiso - the weakest, Our aria is good, if not the absolute highlight. The singing and playing in the above performance, recorded live in concert, are top notch

Also of such swift help in getting hard-to-find music was Mariliis Valkonen of the Estonian Music Information Centre. Thanks to her I now have both the only recording and the score of Ester Mägi's The Sea. The grand old lady of Estonian music is now 99. Here's a lovely photo of her with my treasured friends Andres Kaljuste and Sophia Rahman and, yes, Arvo Pärt, her junior by not so very many years, after a concert in the beautiful centre bearing his name on the Lohusalu peninsula, then newly opened. 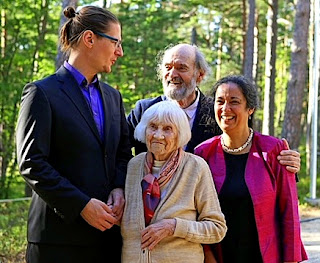 As Sophia sent me a selection of photos from that occasion, many of which I hadn't seen, here are two more: in the hall after the performance 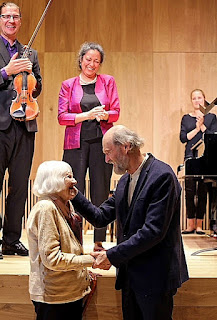 and Mägi as one of the first to stand on the top of the observation tower which was one of Arvo's conditions for the Centre - it's in woods, and only from a height can you see the sea. So this shot is very appropriate in the light of the work that's to be played. 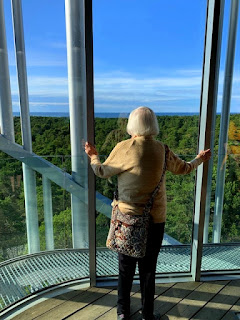 Finally, although it's embedded within the publicity I linked to above, here's the 2018 Europe Day Concert performance of the European Anthem, aka Beethoven's Ode to Joy, in my books the only anthem worth standing for, The silence at the end was completely unexpected: we were mourning for what we were going to lose. It continued for a minute until someone's mobile phone went off. The infallible Simon Weir of Classical Media has captured some of it in the film.

*Great news just in that Sini Simonen, Finnish first violinist of the brilliant young Castalian Quartet, will be joining him on the front desk of first violins.

You and your compatriots have come up with another blissful line-up for the Europe Day concert. Touching, too, to see Ester Mägi--as you've noted to our class, there are a remarkable number of Estonian composers given it is such a small country. The Centre looks lovely, and I hope for a return trip to Estonia and a chance to visit it one day.

The Centre is absolutely beautiful, and even has an Orthodox chapel in the centre. As for compatriots, the orchestra will of course be international, including two Estonians (Marike Kruup and Siret Lust) and a Finn (Sini Simonen, leader of the sensational Castalian Quartet). The first oboist is Olivier Stankiewicz, co-principal in the London Symphony Orchestra.

In the first of the spring 2021 series of St. Louis Symphony concerts, Stephane Deneve included an Ester Mägi work, 'Vesper'. I confess that I'd never heard of EM at all prior to this SLSO concert, but I'm very happy to have heard it. Program listed here, BTW:

I also forgot to comment earlier on your one post that mentioned Jay Hunter Morris, as I was fortunate enough to see him live in the Dallas Opera production in 2014 of "Die Tote Stadt". JHM also sang in "The Gospel According to the Other Mary" with the SLSO and David Robertson. He was genuinely surprised when I showed him the program at the artists' entrance, which fits his general good-ole-boy "aw, shucks" manner.

Do tune in to the Europe Day Concert - the rehearsal today was stupendous, beyond what I could have imagined. If our noon is too early for you, you can always watch later.