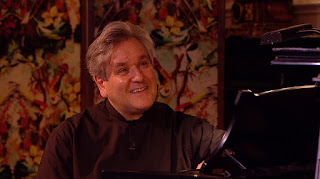 You can truly be called a king of music if, having nurtured every aspect of the Royal Opera's work for an incredibly long and unstintingly successful time, you move on to take up the post of the London Symphony Orchestra's chief conductor (in 2023-4, a season in which Antonio Pappano will be at the helm of both institutions). We may be losing Simon Rattle to Munich, but we keep Pappano (pictured above at the most recent of the Royal Opera Jette Parker Young Artists concerts). And I'm glad to say that the three LSO concerts I've heard him conduct have been five-star unforgettables.

All three have asserted British symphonies as blazing masterpieces (which we knew, but when done at this level, the impression is indelible). There was an Elgar Two with an incredibly refreshing interpretation of Beethoven's Violin Concerto from Nikolaj Znaider back in May 2016. More recently, the two hardest-hitting Vaughan Williams symphonies had knockout impact under very different circumstances: the Fourth in mid-December 2019, when its angry mood chimed with election night anxiety (merited, as it turned out), the Sixth on 15 March 2020. Consider that date: it was the last evening before all concert and theatre venues were shut down the following afternoon at 5.30pm. Those of us still foolhardy to turn up knew the blow would fall shortly; everybody, audience and players alike, felt the dying falls of Britten's Violin Concerto and the symphony's eerie epilogue as metaphors to what was to come.

When Pappano visited my Opera in Depth Zoom course on Madama Butterfly and stayed for over two hours, having arrived in Italy and about to set off from home in the Val d'Orcia to Rome's Parco della Musica for the first rehearsals of an Accademia di Santa Cecilia Beethoven cycle, he had much to say about the three livestreamed Royal Opera events and that last full-orchestral concert. I've transcribed his comments about it.

It’s funny you mention that because we were all wondering why we were still performing; it was clear what was going to happen, but it was scheduled and people came out to hear us and see us. There was just this special feeling on stage throughout the evening, and also a sense of defending one’s right to make music at such an exalted level, like 'we're going to show whatever negativity is out there, whatever devil, whatever scourge, that we have the fight in us'. People from the orchestra came up to me right after the concert and said how extraordinary it was. 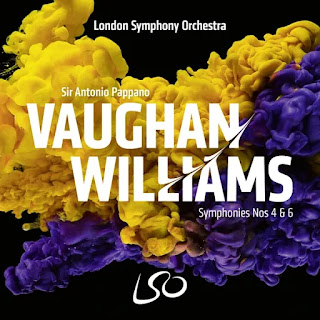 The LSO Live disc of those Vaughan Williams 4 and 6 performances is shortly to be released. I asked Michael Beek, reviews editor of BBC Music Magazine, if he'd let me cover it, and I was delighted that he said yes. I thought I'd put this up before listening, because although I know what I thought of the concerts, it's only fair not to pre-empt the CD review.

At the same time I sent Pappano a congratulatory message about the new appointment, also still needing his address for the gift I wanted to send him as thanks for his generous Zoom time - Yoko Kawaguchi's Butterfly's Sisters (Yale), which a previous visitor, Ermonela Jaho, was very happy to receive. I thought there was no harm in mentioning that I could only think of one successor who would pay as much attention to every department of the Royal Opera as he does, Mark Wigglesworth. His very friendly reply didn't comment on that - it would have been undiplomatic to do so - but I hope that in 2024 we have two great conductors in place in London.

We were fortunate that during our time in Rome he was the music director at the Academia. We heard four seasons of wonderful performances. He also conducted at the Salzburg Whitsun Festival in 2014 - a fine Rossini Stabat Mater and piano/harmonium version o fthe Petite Messe as both conductor and pianist. Only wish I could have the opportunity to witness him at work in an opera house.

He really turned the AdSC into a world-class orchestra - the Tchaikovsky, Respighi and Mahler recordings are superb. Have you seen his Opera Italia series on BBC? Really first-class: he's even allowed to use proper musical terms in masterclasses.

His Mahler #6, the second season I believe, we were there was what sold me on Mahler.