Vasily Grossman: a Mensch at the front line 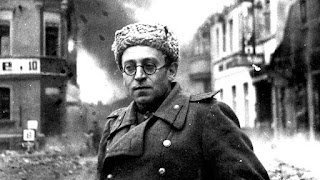 First, as far as those reading in translation were concerned, came Life and Fate, a masterpiece on a Tolstoyan scale and with that genius's nuance in characterisation, about the end of the Stalingrad conflict and what came afterwards. I found it frustrating to begin with: who were all these people who kept popping up without immediate explanation, their back-histories revealed across the course of the novel, if at all? Reading the small print, as it were, one found out that this wasn't a self-contained epic at all, but the second instalment of what one might call a 'dilogy'; the first, For a Just Cause, hadn't then been translated since its Soviet publication in 1952. I wrote a bit about this in a blog entry partly on Life and Fate back in 2018. In brief, there was much dismissal of For a Just Cause's quality; since Grossman had written it while Stalin was still alive, it was deemed to be seriously compromised by censorship and the need to give a postive picture. 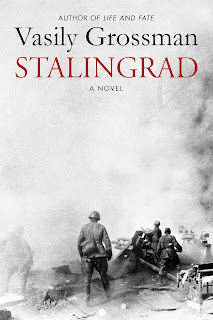 When, at last, Stalingrad, as Grossman had wanted to call For a Just Cause, appeared in a translation by Robert and Elizabeth Chandler in 2019, so many myths about it were dispelled; it's only now that I've been able to read it. Yes, the post-Stalin Grossman would have been harsher on the leader's 'not one step back' policy which resulted in thousands of soldiers being executed by their own; he might have exposed the extermination of the kulaks and the truth behind the forced collectivization of previous years; he might have been harsher on the bickering generals. But the characters we mostly meet again in Life and Fate are so finely drawn, the sense of shame in the retreat and the awareness that Stalingrad was the last of Russia, and soldiers might choose being there over the quieter life on the steppe across the Volga, the general heroic assertion of defending it 'for a just cause', to a death which might seem pointless in the smaller scheme of things, all justifiably strong and vivid. 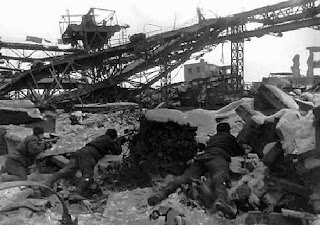 The choices the Chandlers made over co-ordinating no less than five versions seem entirely admirable. Their decisions strike me as analogous with what any opera company decides to do with Prokofiev's most wide-ranging masterpiece, War and Peace, which preoccupied him from 1941 up to his death. In both cases revisions made the most of apparent compromise: Grossman was 'advised' not to make one of his leading figures, the physicist Viktor Shtrum, top of his league - he was Jewish, like Grossman, and that wouldn't do in the still virulently anti-Semitic atmosphere of Stalin's last years - but in creating a purely Russian figure to whom Shtrum is subordinate, Chepyzhin, he merely added another rich creation.

Asked to give some sense of the coal production which helped power reinforcements, Grossman also added a dozen chapters focusing on the work of Colonel Novikov's brother Ivan in the Donbass. And these are fascinatingly well observed - one would no longer wish them away than one would Prokofiev's 13th scene, his last addition to War and Peace, sketching the council at Fili and giving Kutuzov a crucial and deeply moving aria. One of Stalingrad's most vivd and shocking chapters, in which we see Tolya Shaposhnikov so full of hope and budding heroism, was added to the fifth version; once read, never forgotten. Picking up Stalingrad after reading Victor Serge's The Case of Comrade Tulayev made me realise what these two authors, who knew each other (somewhat to Grossman's cost), have in common and where they differ. Both are lyrical about nature, and especially about the night sky, but while the terror of Serge's novel is limited to earth, Grossman's sky is ruined by hurtling death stars - the bombers - and constant noise.

Perhaps the most remarkable thing of all about Stalingrad is that it's not only a great feat of the imagination in the case of the various characters, but carries over experiences Grossman himself had undergone as a reporter constantly heading out to various front lines, and to Stalingrad itself in its darkerst hours, only a few years earlier. How different from Tolstoy's War and Peace, created entirely from a phenomenal effort to recreate events at the other end of the 19th century. 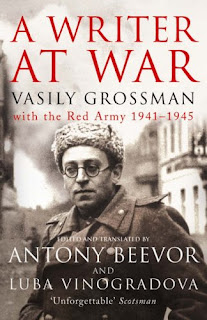 Which of course doesn't make Grossman's work better, only more authentic (not always a commendation in similar cases). That's why it was so enriching to read alongside the novel Anthony Beevor and Luba Vinogradova's A Writer at War: Vasily Grossman with the Red Army 1941-1945. While this was published before either had read Stalingrad/For a Just Cause - which they serve poorly by referring only to Life and Fate - the selected notebook entries show us how much Grossman carried over, often transferring his own thoughts and witnessing to characters in the novel. It also gives us much more about the early days of the war, on the Eastern Front, recreated in the backstory of Colonel Novikov in the novel. Grossman actually arrived in Stalingrad after the attack had begun, but in this entry, perhaps, lie the seeds of a novel about it: 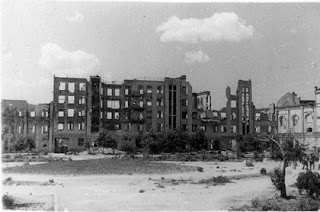 Both in the journals and the novel, too, he describes the buildings without windows as 'blind'. He would eventually see how the city still lived through its defence. And what he hadn't experienced for himself he would get his interviewees to describe. His fellow correspondents were amazed, for instance, according to his boss General David Ortenburg, 'how Grossman had made the divisional commander , General Gurtiev, a silent and reserved Siberian, talk to him for six hours without a break, telling him all that he wanted to know, at one of the hardest moments [of the battle]'.

Movingly, too, A Writer at War it takes us beyond to Grossman's journey back east with the Red Army, the appalling revelations of what had happened to his mother and other Jews in his birth town of Berdichev, the horrors of Treblinka, the depredations of the Soviet army once it left home soil and moved in on Berlin (pictured below, Grossman on the left at the Brandenburg Gate). 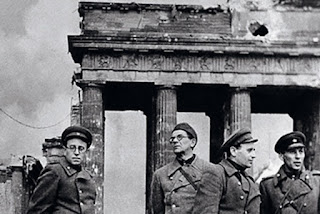 One of the most striking things about Stalingrad is that Shtrum opens the last letter from his mother but we learn nothing of the contents. The complete letter forms a full chapter only in Life and Fate. I wept again when I read that Grossman wrote two more letters to his mother in 1950 and 1961, the 20th anniversary of her death; they are translated in full on pages 259-61 of A Writer at War, a vital epilogue to the fates of both the fictional and the real mothers.

His essay on Treblinka is shattering, ruthless in its detail and its furious turns of the screw, and he acknowledges its awfulness:

It is infinitely hard even to read this. The reader must believe me, it is hard to write it. Someone might ask: 'Why write about all this, why remember that?' It is the writer's duty to tell this terrible truth, and it is the civilian duty of the reader to learn it. Everyone who would turn away, who would shut his eyes and walk past would insult the memory of the dead. Everyone who does not know the truth about this would never be able to understand with what sort of enemy, with what sort of monster, our Red Army started on its own mortal combat. 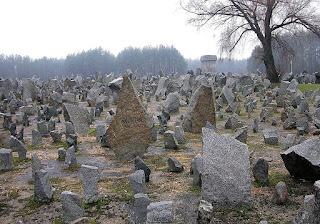 Next task: to get hold of a translation of The Black Book in which this essay features, thorough documentation of the fate of Russian and other Jews in the Holocaust, which he co-authored with Ilya Ehrenburg (it should be available to all for a more affordable price). The story of its suppression in the Soviet Union and of the hostility towards the Jewish Anti-Fascist Committee makes for a further chilling chaper. Even if Grossman were a lesser writer - and all this makes clear he is one of the very greatest - the record and reportage alone should be essential reading for everyone.

Wonderful advocacy as ever, David. I struggled with (and abandoned) Life and Fate - perhaps for the reasons you give. This inspires me to re-engage with Grossman. Thank you. Am currently reading - loosely connected - Ulrich Alexander Boschwitz's The Passenger. Possibly not a great novel, but a fascinating evocation (from a Jewish writer) of the rapid deterioration of the position of Germany's Jewish population in the late 1930s. If it's at all Buchan-esque it's as seen through the lens of Kafka; the protagonist feels himself given a 'role'(a ridiculous, unpleasant and thoroughly dangerous one) but he doesn't quite know what it is. He's not welcome but he can't get away, etc.

Thanks, JohnG. Interesting that Boschwitz's novel has the same title (The Passenger) as Zofia Posmysz's novelized account of meeting her Auschwitz tormenter many years later. It was turned into a very effective opera by Weinberg. Do try 'Stalingrad' - I guarantee you'll be more immediately engrossed. It's tempted me to read 'Life and Fate' again with full knowledge of the characters' previous histories, though I was still stunned by it when I tried a second time and got to the end.