Hovs Hallar: chess on the beach 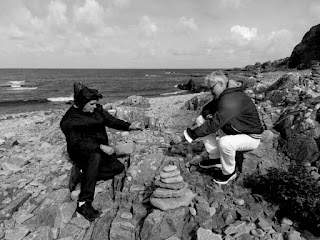 I won't pretend that this shot on one of the primeval beaches of Hovs Hallar in south-west Sweden is anywhere near an accurate reconstruction of one of cinema's most feted scenes, where Max von Sydow's knight, washed ashore with his jester-squire Jöns  (Gunnar Björnstrand) and two horses, starts a game of chess with Death (Bengt Ekerot) as a means of playing for time. 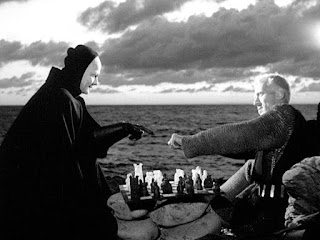 Nevertheless it was convenient that Agustin Blanco Bazán had a raincoat with a hood and that Peter Krause's haircut had sufficient correspondence to von Sydow's; and it was a bit of what Bergman would call a 'schnappsidee', though our fuel at this point was coffee in flasks. Our expedition was planned by the Birgit Nilsson Museum magnificent hosts for three glorious days - I've done my bit on the musical side now for The Arts Desk - in conjunction with an excellent local guide, Ingrid Persson Skog. Here she is on the beach with three of us - photo taken by our other excellent cicerona, Lucy Maxwell-Stewart - showing Bergman's sequence on her iPhone. 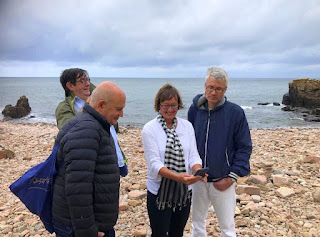 As for the museum people's thoughtfulness, it's summed up in one piquant detail - the chessboard biscuits they provided with the coffee. 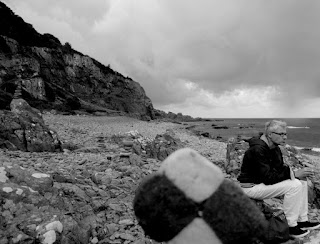 It was here to Hovs Hallar, the rockiest part of the otherwise mild and beautiful Bjäre peninsula in the northwest of Skåne, that Bergman came to shoot two celebrated scenes - the opening sequence with the chess game and the Dance of Death, an improvised shot with two tourists drawn in because some of the actors were hung over after a last-night party, as well as the idyllic picnic shared by young parents Mia and Jof. The whole thing was completed, as stipulated, in a mere 36 summer days, the bulk of it on Svenska Filmindustri's studio plot in Råsunda. Better get the iconic shot of Death in here to complement the above, more or less the same positioning. 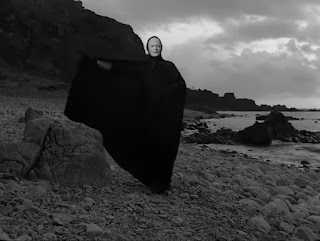 I had it in my head that Hovs Hallar was an island because the second film to use it as a location, the horrific The Hour of the Wolf (1966), takes place on an imaginary equivalent. Both films use the relatively level ground before the path descends at times. Johan (von Sydow, this time playing a Bergman alter ego), the tormented protagonist of The Hour of the Wolf, attacks Heerebrand, who describes himself as a curator of souls, as they walk along the upper ground 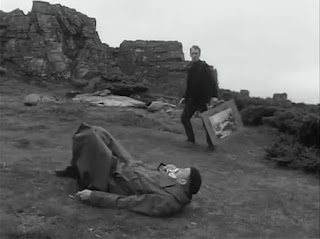 while knight and squire encounter the first victim of the Black Death as they head towards the nearest settlement. 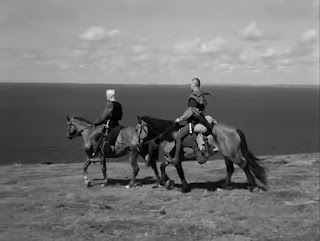 There's now a hotel in the middle of this nature reserve, and various boards, maps and signposts. The most fascinating tells us that this is a site designated by the European Film Academy as a 'treasure of film culture', a place 'of a symbolic nature for film culture' - one of 11, apparently. 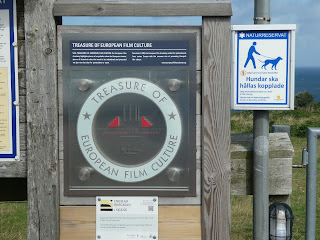 From here, there's little sign of the drama to come, only - in cloudy, windy weather such as we had at the start of our walk - a hint of desolation with a lone tree. 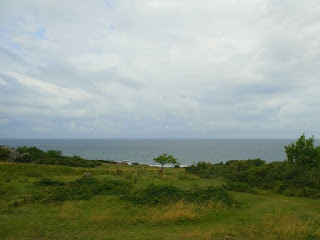 But soon, on the descent, the true nature of the magnificent land and sea scape becomes apparent. 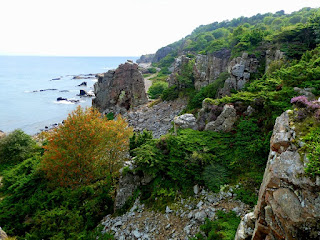 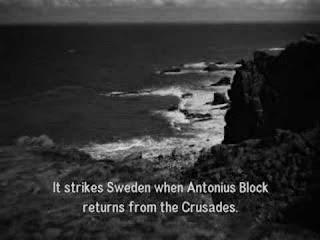 and a view of the beach immediately below the path when knight and squire make their ascent. 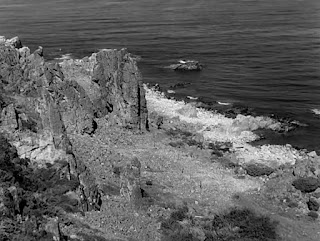 The rocks are red gneiss, heaving up in a geological fault, as dramatic as the stacks on the west coast of Fårö, the island which Bergman made his home and to which he transferred much of his outdoor magic (I wrote about the unforgettable experience of Bergman Week on theartsdesk). 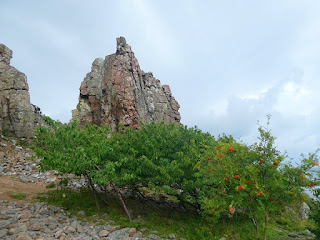 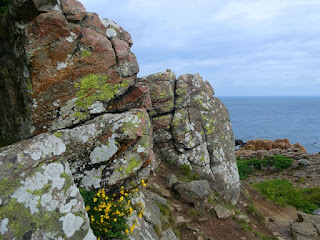 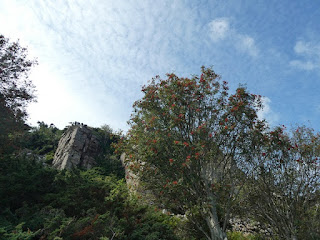 But note how this is far from being a barren landscape. Rowan trees have sprouted up everywhere; there are honeysuckle, crab apple trees and blueberry bushes. 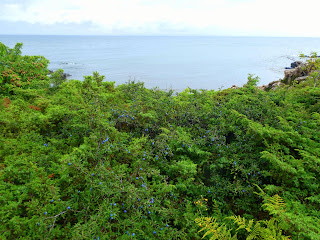 Lichen grows on the pebbles and rocks... 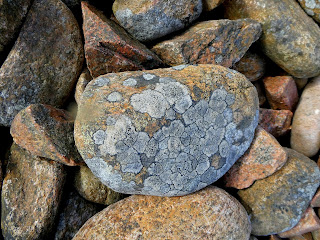 ...if they're left alone. Unfortunately human curiosity has taken upon itself to make stacks on the first beach you reach, 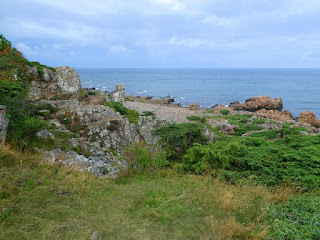 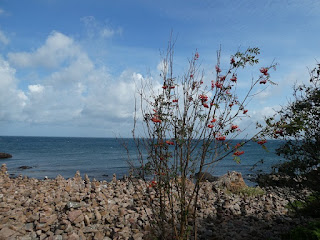 The further you walk, scrambling over rocks between beaches, the more wild it seems to become. Not everyone progresses beyond the pile-up bay, though after our coffee break, more folk were arriving; pleased that we started so early. 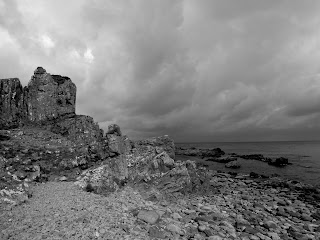 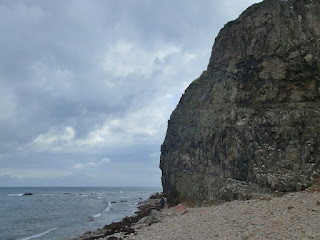 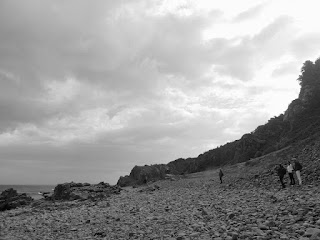 I thought of the terrifying scene in The Hour of the Wolf where Johan is bitten in the neck by a young demon, whom he kills and hurls out to sea. 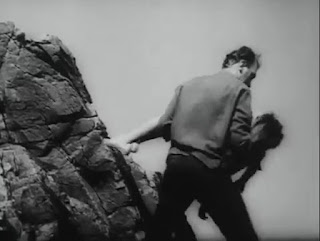 Then there we were, on the familiar beach with the cave, seen here behind the Knight in The Seventh Seal. 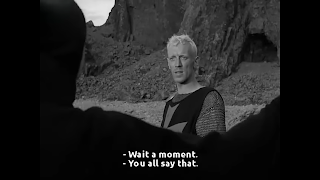 Lucy and Ingrid are on the beach, Agustin and Peter by the cave. 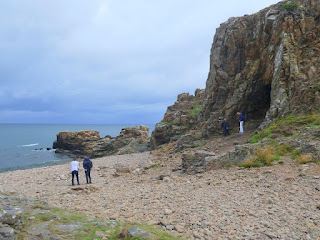 We were not alone. Cormorants lined the rocks, just as at Pittenweem in the East Neuk, my previous coastal destination. 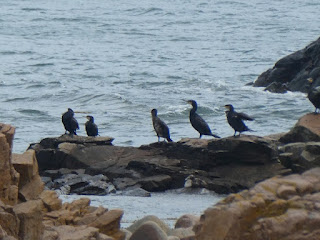 While there were spots of rain as we listened to Ingrid, sipped our coffee and ate our chessboard biscuits, the expected downpour never came, and the sun came out for our route back. 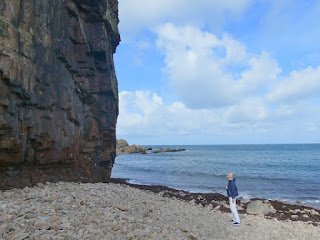 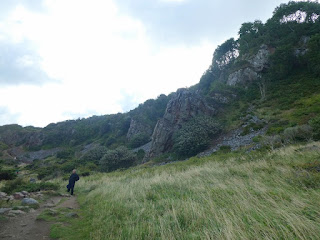 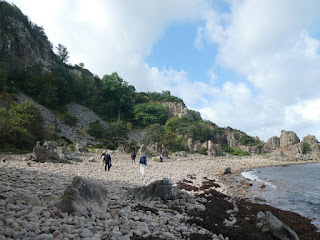 Then we were off for a picnic and a swim on what I thought would be milder territory - but the sea swell was rather alarming - and an afternoon looking at the concert hall and art gallery just being completed, plus a wonderful if short time in the main town of Båstad. But that's for another post.

How marvellous to see all these pictures David! I just wish I had a picture of that painting of Hov's Hallar which is on my London wall at hand to contribute...
I am so glad you made it. The next trip will surely be to Halland's Vadero, to see, among other important locations, den 'liggande linden' (the recumbent lime tree) where Nils Poppe had the vision of the Virgin Mary- also that beautiful beech forest through which the little company fleeing from the plague are travelling in the light Swedish summer night... I hope we can go together some time!

Indeed. we need to include the island on a spring jaunt which must include a walk all round the coastline of the peninsula. Interesting that there are other locations for The Seventh Seal there - no official source mentions these two, only that the rest was filmed in the outdoor studio area. I remember you mentioning a beech forest on an island and asked Ingrid about it. That's also another reason why I thought Hovs Hallar was an island...

Ah, I thought I had commented here, but clearly not! I thought this post was magical--and of course Sweden is very high on our "bucket list" when it's possible to travel more or less easily again (knock wood that time will come).

So difficult to know where to go first - the south-west of the country was new to me, very different landscapes and vegetation from what I know further north. It's another six hours by train to Stockholm! I feel a very close affinity to the Bjäre peninsula, above all because our hosts and Ingrid were so welcoming. And she wants to come with her husband for next year's Norfolk Churches Walk (we're due this year's in less than a week's time). Your own 'new' country looks very marvellous from the photos, and you know how much I already love what I know of the Hudson Valley.