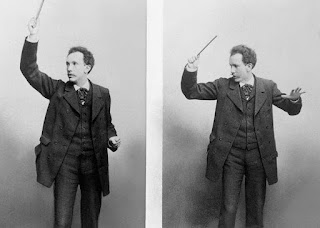 'Now I’ve conducted Tristan for the first time, and it was the most wonderful day of my life'. I used the same quotation - the 27-year-old Richard Strauss to Wagner's widow Cosima, on 17 January 1892 - to introduce my review of the Glyndebourne performance at the Proms earlier this week, because I surmised Robin Ticciati felt that way on conducting his first Wagner opera for the first time too.The above photos were sent, signed, from Weimar to fellow-composer Humperdinck, whose Hänsel und Gretel Strauss premiered in that beautiful town in 1893.

Tristan und Isolde at Weimar starred Strauss's future bride, Pauline de Ahna (also a favoured Elisabeth at Bayreuth) and his pupil Heinrich Zeller, for whom he wrote the insanely taxing role of Guntram in his hyper-Wagnerian first opera. There were no cuts - rare then, and still not so common now (the Aix production conducted by Rattle this year has a whopping one in the dialectics of night and day, love and death, the lovers indulge in before the Liebesnacht proper gets going. I think we should hear it all - there are no commonplace bars in Tristan).

We have one precious sound-document of how Strauss approached this most elusive of all great masterpieces: a recording of the Prelude made in 1928 with the Berlin Philharmonic Orchestra (the best sound is on the DG pressing, but that's not downloadable here).

Yes, it's fastish - difficult to compare timings with other Preludes because there's a 'concert ending' which takes us to the Liebestod music - but the rubato, the ebb and flow, are masterly and above all human. That's the difficulty for the conductor to decide: human or oceanic? Others prefer slower tempi, surprisingly so Toscanini (but then remember that the biggest discrepancy in Parsifal Act Ones at Bayreuth was between Strauss and Toscanini, who took half an hour longer...). In my first Opera in Depth class on Tristan und Isolde, I played both the Strauss and this NBC recording.

All the students who spoke preferred the Strauss; I was delighted. Though it's very much a matter of choice and temperament, when Wagner only writes 'Langsam' ('slow') at the start. Conductors would be wise to observe his tempo fluctuations thereafter. Anyway, in the second class, I played the way to the climax in performances by Stokowski (very volatile, masterfully conducted, and played by the Philadelphia Orchestra) and, for slow-burn intensity, by Mravinsky and Pappano. Personally, I felt a 'yes, this is how it should be' once the drama of the Prelude properly flows from Ticciati at the Proms. You would be well advised to listen to the complete performance while it's still available on BBC Sounds (until the end of this month). 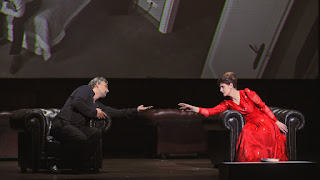 We've now passed the halfway mark in Class Five last Wednesday, and of course I have nothing in my head but the sounds of the 'Liebesnacht'. The compelling but deeply unsettling way that director Krzysztof Warlikowski handles it in Munich, with spellbinding performances from Jonas Kaufmann and Anja Harteros (pictured above) and superlative conducting from Kirill Petrenko, seems to me the best approach I've seen. 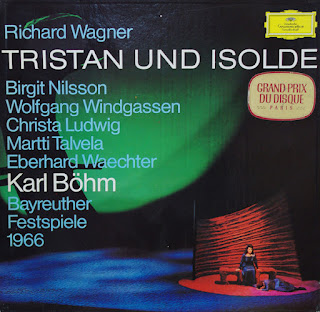 Soundwise, I'm constantly shifting in examples between so many recordings, but predominantly Lauritz Melchior and Kirsten Flagstad with Beecham (or Reiner), Bayreuth '66 (Nilsson and Windgassen with Böhm conducting), Vickers and Dernesch with Karajan, Margaret Price and Rene Kollo with Carlos Kleiber, Linda Esther Gray and John Mitchinson with Goodall. Linda is returning to talk to us next week, and Peter Rose will appear to discuss Marke's monologue. Later we hope to welcome Robin Ticciati and Antonio Pappano, and Anne Evans in the final class. More in the pipeline. It's rich!

Absolutely fascinating! Thank you so much, Andrew

Thank you, Andrew, and for your many enthusiastic comments over on LinkedIn. I do think a 45-minute BBC Radio 3 Building a Library could be done on the 'Tristan' Act 1 Prelude alone. I once covered all recordings of 'Parsifal' in that time, which was insane, but left me in no doubt of the truly outstanding.