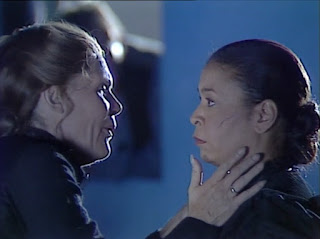 Everyone should be - I can't think of a more powerful introduction to the poleaxing emotional possibilities of opera than Janáček's first masterpiece, nor a more searing production than the late Nikolaus Lehnhoff's for Glyndebourne (with astonishing performances from Roberta Alexander as Jenůfa, on the right above, and Anja Silja as her misguided stepmother, the Kostelnička or village sexton, left). But what I mean is, anyone else want to sign up for my autumn term Opera in Depth course on Zoom? We have a healthy number already, but the beauty of Zoom is that folk can tune in from anywhere in the world (we have a southern Californian who rises at 6am his time to be there at 6.30 - 2.30pm UK time). And you can always receive the video the day after if you can't attend. We start this coming Monday, 27 September.

Since the curtain fell on live classes in March 2020, I've been running two Zoom courses - the regular opera one and a second related to wider themes. We've covered 'The Symphony' from Haydn to John Adams in 11 classes, with special guests able to drop in like conductors Vladimir Jurowski, Paavo Järvi, Vasily Petrenko and Mark Wigglesworth, and cellist/Russian music expert Elizabeth Wilson; and then four terms on Russian music, quite an epic, with instrumentalists including Alina Ibragimova, Pavel Kolesnikov, Alexander Melnikov, Steven Osborne and Samson Tsoy. 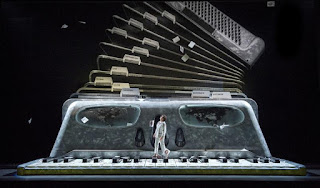 This term, it's Czechia on both fronts: Jenůfa - concurrent with the Royal Opera's new production - followed by Martinů's dream opera Julietta (scene from the Richard Jones production at ENO pictured above), five Monday afternoons apiece, in the opera course; and Czech music from Smetana to Martinů on Thursday afternoons. I still have three more classes to go on Tristan und Isolde under the aegis of the Wagner Society of Scotland, which is why I won't be starting the second course until 14 October.

For further details, and how to contact me if you want to sign up, click to enlarge the below. I don't need to include the Czech music flyer too - the details, except for the dates, are the same. Each term runs for 10 weeks. 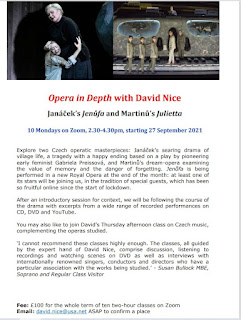