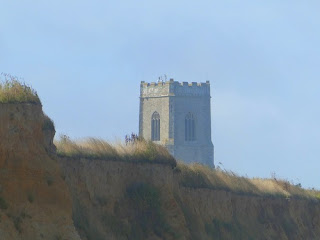 Having reached our 233rd Norfolk church (mostly pre-Reformation, though we've always thrown in a few Methodist chapels) a year ago, we're off on another walk for the Norfolk Churches Trust this weekend. Plans in brief are to rove the Wensum Valley and collect specimens in Elsing, Lyng, Great Witchingham, Little Witchingham (the semi-ruined one with the medieval wall paintings), Swannington, Alderford, Attlebridge, Morton-on-the-Hill and Weston Longville.

While I have your attention, you can donate via the Norfolk Churches Trust Just Giving website (please say that it is for David & friends). Otherwise, cheques made payable to the Norfolk Churches Trust can be posted to me at home (if you don't have the address, message me privately with an email and I'll send the address). Alternatively, a kind word never goes amiss. 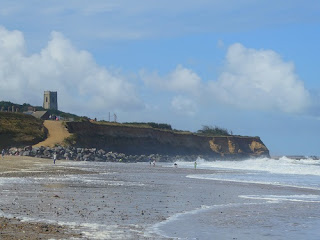 This time we won't be taking in the wonderful Norfolk coastline, as we did on perhaps the most varied walk of all in 2017. We revisited Happisburgh two weekends ago, as these photos attest, more by happenstance since the crab and lobster shack at Overstrand had sold out, and so had the van at Mundesley; the girl blamed Brexit for the lack of foreigners in the trade. Our host Jill drove us southwards, and at Happisburgh to our surprise we found a shop selling what we wanted. So it was down on to the beach, just as the grey skies cleared. for a picnic under the cliffs (but not too close). Rough seas forbade swimming, but walking along the shore brought the usual frissons this quite dramatic part of the coast produces. 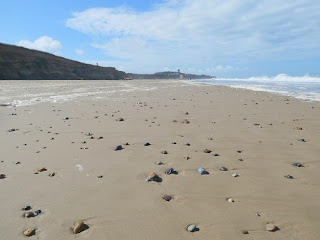 Thought we'd also return to the beautifully restored long barn at Waxham, hoping that this time we could get in as back in 2017 there had been a wedding reception. Same in 2021, but of course we stopped for tea. Waxham is a lonely little place behind the dunes which must be very atmospheric in the bleak midwinter. It has a somewhat schizoid existence because of the rather dilapidated farm and church on the one side and the popular tea-place which helps keep the barn in good nick 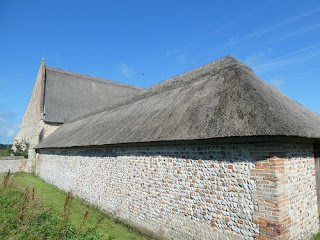 while the west end looks almost church-like with its lancet windows. 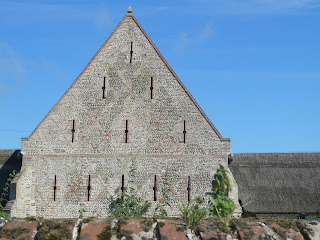 The melancholy pleasure of semi-ruins begins as you walk around what remains of Waxham Hall, a rather dilipidated farm from which the church tower can be seen from the west. 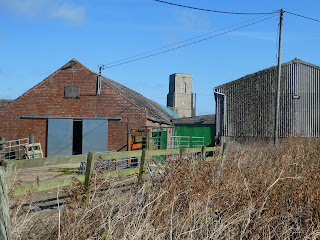 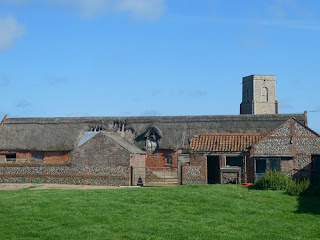 The walls of the old hall are splendid, with what Pevsner calls 'polygonal angle buttress shafts crowned by finials' 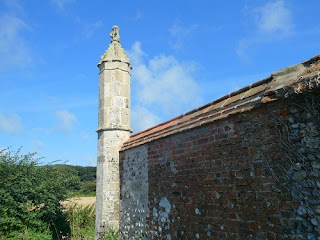 and a 15th century gatehouse, seen here from one of the church windows. 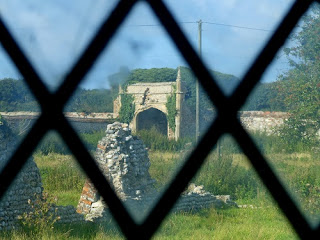 St John's feels very lonely on the seaward side 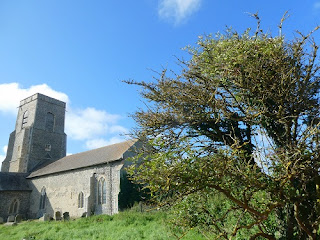 though its treasures are disproportionate to the care (not) lavished on it, starting with the traceried spandrels above the south porch entrance, 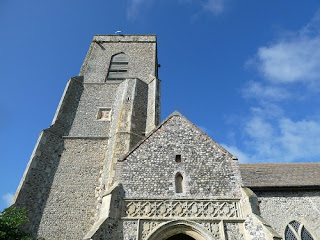 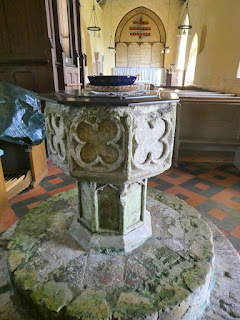 and the early Elizabethan, effigyless monument to Thomas Wodehouse 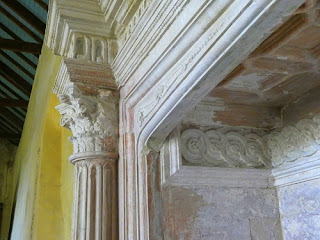 which contrasts pleasingly with the restraint and plainness of the church as a whole - I like these unvarnished buildings. 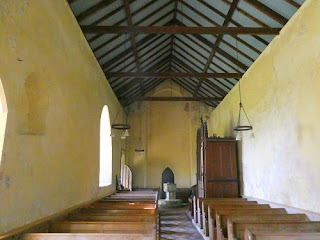 A splendid ruin ('one of the best...in the country,' writes Pevsner) contrasts with a rather lugubrious Victorian church in the grounds of St John the Evangelist Stanmore, which we reached at the end of last Sunday's walk in intense sunshine, led by our friend Jimmy. The old building was consecrated by Bishop Laud in 1632, and its first feature of interest is the red brick. 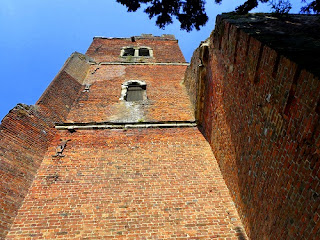 The interior has been closed since Lockdown, but you can see enough through various gratings. It's dominated by the 1866 Gothic Mausoleum to the Hollond Family of Stanmore Hall - clearly the Victorians were still using the old church as an extra cemetery. 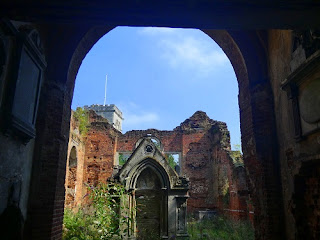 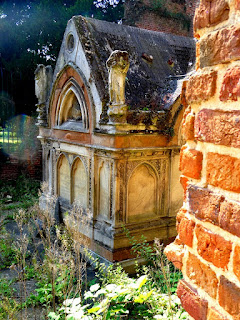 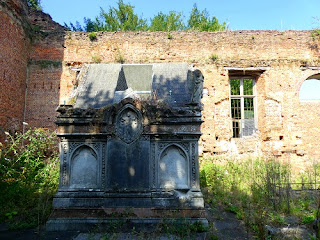 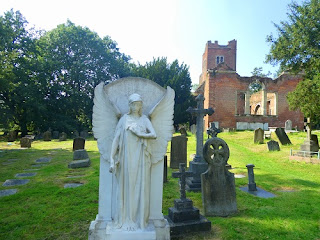 and turns out to be the grave of W. S. Gilbert and his wife Lucy. Famously, Gilbert died of a heart attack while trying to rescue a young woman whom he was giving a swimming lesson in the lake at his country estate of Grim's Dyke. Handel, incidentally, has associations with Canons and St Lawrence Church a few miles away, owing to the connection with Lord Chandos. We must make another visit to see that splendidly decorated church. 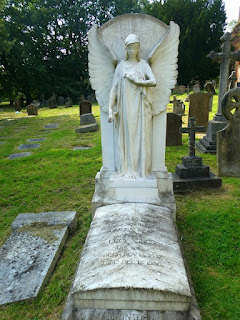 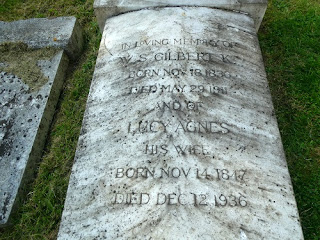 Inside the Victorian edifice, there are several old monuments, best known being that of John Burnell (died 1605) and family, twice restored. 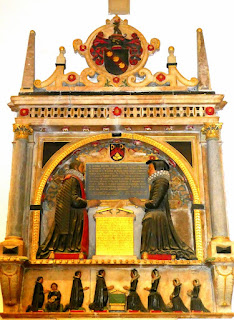 Then, rather unexpectedly in a side chapel, is the marble figure of Sir John Wolstoneholme (died 1639) by Nicholas Stone. 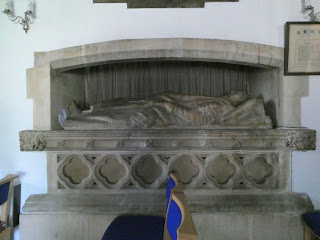 The much more recent glass provides some comedy specials in two saints - the first a Marvel comic hero, the second a simperer who doesn't look capable of slaying dragons. 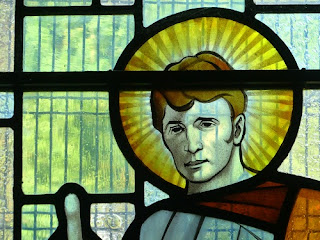 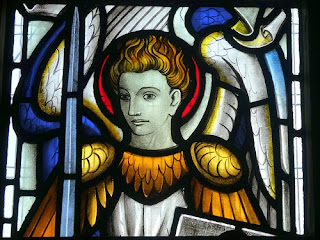 There are, however, two sets of glass which prove noteworthy, though neither is mentioned in Pevsner. First, Burne-Jones angels in an appropriate frame 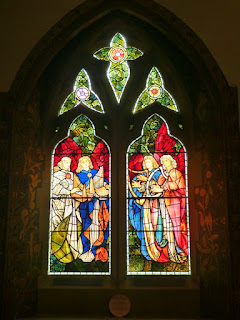 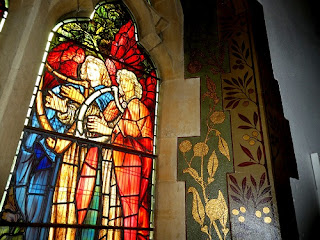 then, on the other (north) side, peacock wings on angel and lion. 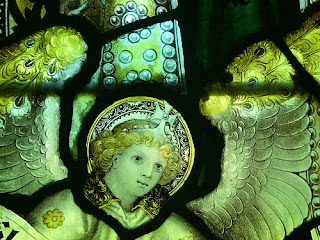 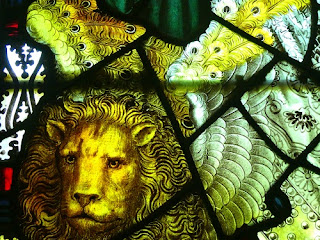 We'll be seeing older glass than this in Norfolk, but the design and execution are surely both first-rate.

Lovely blog, David, whetting my appetite for our walk tomorrow.

And what a walk it was, wasn't it? Even an advance glimpse at the churches ahead couldn't have prepared me for the wall paintings, the glass, the hammerbeam roofs, the general light, any more than the Met Office forecast gave any glimmer of the good weather. Having you two along brings extra sunshine. And so happy to have the Sunday lunchtime coda at the Suffield Arms.