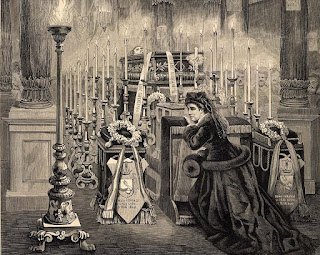 The heroism can apply to women, too, of course, and among the brief flourishings of wholehearted effort, Empress Elisabeth ('Sissi') of Austria's was not the least impressive. That's her above at the coffin of one of the few sober, balanced leaders of Hungarian history, Ferenc Deák (portrait below by Bertalan Székely), briefly Minister of Justice and then the pioneering reformist who even in semi-retirement steered the capricious Hungarian cause through choppy waters. His line was essentially that of passive resistance from 1849 through to the compromise which gave semi-independence in the form of the Magyar wing of the Dual Monarchy, the Austro-Hungarian Empire, in 1867. 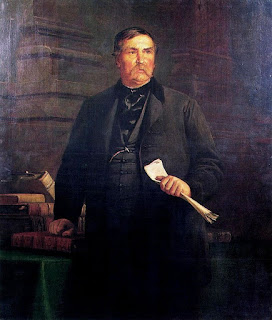 What a contrast Deák made to the headstrong, all-or-nothing nationalist Laos Kossuth, who went into exile after the disastrous defeat of the Hungarians when Emperor Franz Joseph called in the Russians in 1849. I'll come back to Kossuth anon, but it's worth briefly paralleling that glorious but doomed venture with the equally celebrated campaign against Habsburg rule organised by Prince Ferenc Rákóczi II (pictured below by Ádám Mányoki). 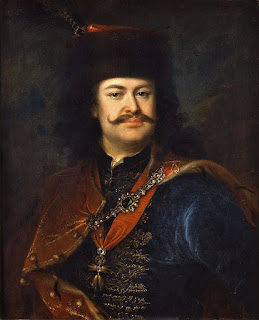 This, too, despite its brave premise of a 'people's army', was doomed. It lasted eight years and, lacking as so often in Hungarian history proper help from international allies, came to an end in 1711. But it resonated down the centuries, first with ballads in the 1730s and then the march known in Hungarian as the Rákóczi-induló, published by Nicolaus Scholl in 1819-20. For the Hungarian music Zoom course, which has now reached its fifth class/door with Bartók's Bluebeard's Castle, I found diverse versions on traditional instruments. This track, from a Jánosi Ensemble collection, has various treatments: with the second, you might start to recognise the theme familiar from Berlioz and Liszt.

Berlioz wrote his first dazzling orchestral version, famous to us in its incarnation as part of La Damnation de Faust, for a visit to Pesth in 1846, vividly described in his memoirs. Always good to have a Hungarian at the helm; in class I used a Berlin performance from the great Ferenc Fricsay, but this is quite a YouTube treasure, with that fine composer and human being Ernst von (Ernő) Dohnányi conducting the Budapest Philharmonic Orchestra.

Lizzt's Hungarian-Rhapsody treatment of the march is predictaby wacky, and though I'm not a fan of much of Liszt's piano music, the great Cziffra can persuade me in the fireworks.

The erratic fight for freedom in the 19th century did at least see the talented, pioneering but flawed hero Kossuth offset by two much more stable figures - in the earlier half of the 19th century, Count István Széchenyi, who made so many beautiful improvements to the conglomeration of towns soon to be known as the city of Budapest, and later the aforemtioned Deák. Kossuth's legend spread fast; he had not been long dead when in 1904 the young Béla Bartók composed his first major orchestral work, with the defeated hero as its subject and the symphonic poems of Richard Strauss - whose Also sprach Zarathustra at its Budapest premiere had just turned the young Hungarian back to composing - as its style model.

It's an impressive work, with a parody of the Austrian national anthem in the vein of the critics/adversaries sequence in Strauss's Ein Heldenleben and a theme very close to the heroic pride of Liszt's Second Hungarian Rhapsody near the end. We listened to it in full as part of the second class, with the benefit of a generous YouTuber's score co-ordination.

Without Elisabeth as passionate advocate of the Hungarian cause, though, matters might not have moved so quickly after Kossuth's hasty departure to avoid execution. Partly in opposition to her powerful mother-in-law the Archduchess Sophie, who preferred Czech, Sissi learnt Hungarian in the face of all advice. In 1866 the 28-year-old Sisi met 42-year-old Count Gyula Andrássy, sentenced to death in absentia after the defeat of 1849 but soon to become Prime Minister. If it was a romance, it had to be one conducted in the public eye - and Andrássy would have been very careful indeed. Hungary's cause was also greatly advanced when Bismarck's Prussians crushed the Austrian army at Königgrätz that same year = the Emperor now needed to look east. 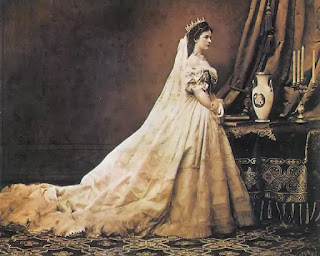 And so on 8 Jun 1867 Franz Joseph became King of Hungary as well as Emperor of Austria in a ceremony of great, flashy, almost oriental pomp, though most eyes were turned towards the coronation of the Queen-Empress. Liszt composed a remarkably concise and - for him - chaste Coronation Mass. It runs quite a gamut in its 45-minute span - eastern, Rákóczi-song echoes for the 'Qui tollis' of the Gloria, returning in the 'Agnus Dei', straightforward brass pomp for the big blazes, though not overdone, and a chaste harmonisation of Gregorian chant in the 'Credo' with ony organ accompaniment, The students were charmed by the Wagnerian Lohenginesque purity of the 'Benedictus', its violin solo tinged with native fiddle inflections.

I'd always steered clear of finding out more about the celebrated Empress-Queen destined for such a tragic fate, rather repelled by the Sissi 'cult' in Vienna. And of Crown Prince Rudolf all I know is about the scandal of Mayerling, mainly from Kenneth MacMillan's stunning ballet. But Rudolf, too, was a highly intelligent supporter of the Hungarian cause. A friend to Hungarian and Austrian Jews, he had an articulate take on the Hungarians' nationalistic errors, Under a pseudonym, he wrote, for example, this:

The sad thing for Hungary is the Magyars' lack of consideration and inability to understand that nothing can be achieved by bad treatment and contempt and momentary vehemenent regulations with the nationalities, who are numerically superior, and of whom one has absolute need in order to preserve the Hungarian state in the same size, which today it still possesses...In many, in fact most parts of the territories of the Crown of St Stephen, only the nobility, the officials and the Jews are Hungarian - the people belong to other tribes. 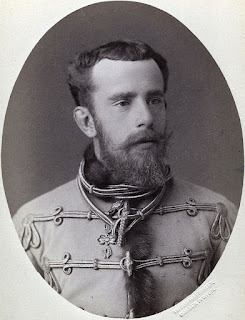 What Rudolf writes there is prophetic of trouble to come, especially in the 20th century. Even when there was such hope and growth in the later years of the 19th century, very largely due to the emancipation laws of 1849 and the major presence of Jews in industry and commerce which helped to make Budapest so prosperous a fin de siecle city, the anti-semitic backlash of the 1880s provoked him to write, this time anonymously, in the Neue Wiener Tagblatt, that 'an abyss is opening up in Hungary, and much that still appears viable today can easily fall into it'. 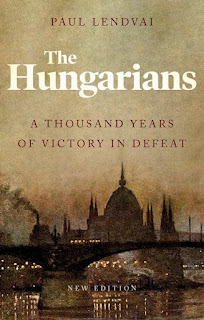 I am indebted for clarity on all this to Paul Lendvai's The Hungarians: A Thousand Years of Victory in Defeat (Hurst). It's been as essential a companion through the Hungarian music course so far as the culturally wider ranging The Czech Reader was in the previous term. Lendvai's chronicle constantly throws up fascinating personalities like the above, and the thriller-nature of the read only increases from 1919 to the present day. You can tell that Lendvai doesn't mince his words by the fact that the final chapter, updated for the 2021 edition, is called 'Viktor Orbán's "Führerdemocracy" ', Perhaps I'll return to later developments in another blog entry. There's a reasonable hope that Orbán might not do so well in the April elections. Meanwhile, onward to 2014-19 this coming Thursday with Bartók's and Kodály's Second String Quartets and Bartók's The Miraculous Mandarin, plus sideways glances at lesser works like The Wooden Prince.

Another great piece of mini history! Thank you so much. We Americans don't get a lot of this in our high school. Excellent pictures and great musical examples. Thank you!

Thank you, Milo. We didn't get much of it in my secondary school, either. All I remember are the Industrial Revolution and Spinning Jennys. Nothing about world history at all.

And thank you, Liam. The historical side is all due to Lendvai's excellent Hungarian history, though it was pleasing how the musical works could be meshed with the heroics and the coronation.

What a wonderful post! I have bookmarked to visit and listen to musical selections, but wanted, before it slips my mind, to offer you a little tidbit on Kossuth. There is a monument to him very near our NYC apartment, which is how I first encountered him. Subsequently, there he was in Simon Winder’s Danubia, who wrote that, after the failure of the 1848 revolution, “Kossuth [became] a celebrated exile and global voice of liberalism, even though his decisions had provoked disaster at every turn.” I suspect your description here is a bit more well balanced!

Thanks for the reminder about the excellent Simon Winder (I still have 'Lotharingia' to read). Must consult when I get back. Currently in Oslo - I'll do today's Hungarian music Zoom class from the Oslo Phil's offices on the 10th floor of an office building overlooking the harbour. Delighted that a conductor destined for greatness (if he's not already there), Klaus Mäkelä, was able to spare me some time for a short zoom film on Bartok's 'The Miraculous Mandarin', the suite from which he's conducting tonight in a very exciting programme (typically daring).