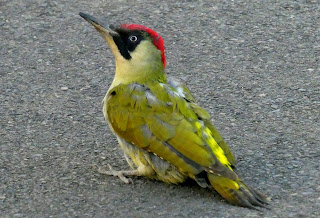 My green woodpecker shots from Kew last March - among the huge selection of pics I put up recently to mark six months of Friday cycles along the river and picnics in the Gardens - have better backdrops, but this portrait comes with a pleasing history.

I thought it was time I might see these beautifully marked creatures again on Friday afternoon, so I headed to the huge tulip tree where Cally and I had seen two of them last year.  No sign, but then when I was walking through the woodland zone, I heard the familiar tapping from a dead tree. Waited patiently for 10 minutes; no show. I was just coming to the end of my Rundweg when most unexpectedly this beauty landed right in front of me, and stayed watchfully on the ground just long enough for me to get a snap.

I've been preparing a much more important post in response to the evil time we're now living through - witnessing immense courage as well as mindless destruction - but I thought I'd just drop this here with a few other shots from Kew. Jays, I know, are commoner, but this one also gave me a good glimpse. 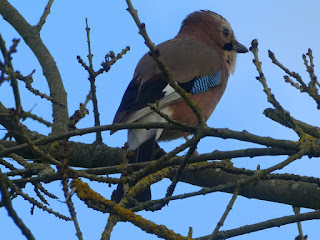 A close up to catch more of that amazing blue and black feather is worthwhile - like the green you find on the side of the now-ubiquitous Egyptian Goose. 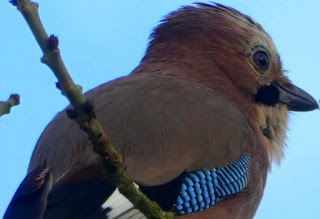 It's nearly full magnolia-grove time. One or two flowers on most are now emergent 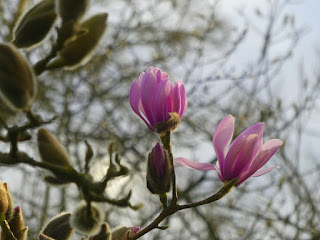 but only in turning round just before I walked away did I notice that one specimen was in blooming spate - Magnolia campbelii, the misleadingly-named Pink Tulip Tree. 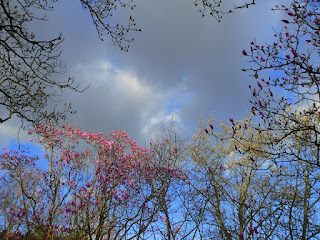 So that deserved a retracing of steps. 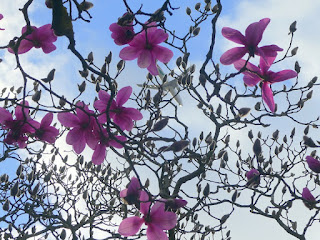 Much else is incipient, but early riser Cornus mas, the Cornelian Cherry, is doing well around the lake 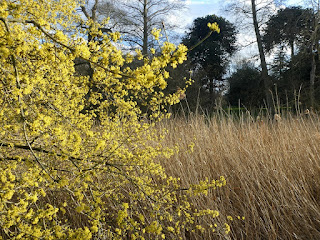 while earlier in the week, the plum tree in Fulham Palace's walled garden was heading towards peak blossom. 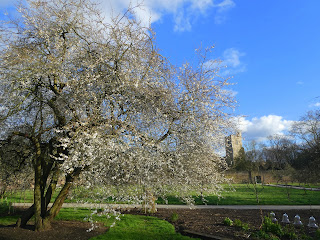 One last bird shot, more to ask for any ornithologist's advice: is this a Water Pipit I saw at the Wetlands Centre yesterday? UPDATE: my young orni friend Freddie tells me it's a male stonechat, 'still, a very exciting bird! When I was in Spain, I mentioned to the chap I was birding with that, in English, it gets its common name from the male’s call, which supposedly sounds like a stone mason chipping away at a block of stone. He casually replied that its Catalan name roughly translates as “sleeve-shitter,” after the excrement they leave on fence posts…' 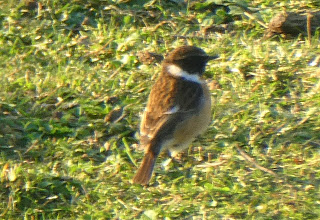 Your woodpecker photo is brilliant. How lucky the woodpecker revealed itself, finally, and posed! Still winter here, so particularly lovely to see evidence of spring your way.

Quite a long way from the original sighting-place, too! Serendipity did seem to be at work... May your spring arrive. We are going to get false signals for a while to come, but many shoots are there and the daffodils are a riot just about everywhere.

Like I wrote, it seems unreal to be enjoying this when 7 million Ukrainians have fled for their lives and others are laying down theirs. Auden's 'A Summer Night' comes, as always, to mind.

Early spring has it struggles

I look forward to your commentary on Ukraine. You are so right about the Auden, too.