And the Best Tatyana Letter Scene winners are... 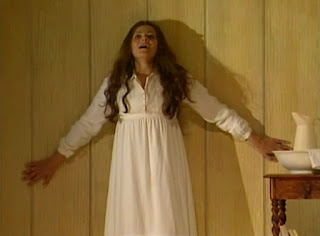 ...as far as Tchaikovsky's opera is concerned, two: still,  on DVD and in the opera house, Yelena Prokina for Graham Vick at Glyndebourne back in 1994. Here's the reaction of some of the students on my Opera in Depth course after I'd played it to them on Monday. I've cut down the bigger picture to focus on the best responses. One lovely person with a lifetime of astonishing musical experiences recalled emotionally what having seen it at Glyndebourne meant, and how happy she was to see it again now that she and her husband can't get there any more.

Two hours still weren't quite long enough on what turns out to be so many people's favourite operatic scene. Sound recording only wise, there was a strong positive reaction to my personal favourite here, Gabriela Beňačková in a Supraphon disc of Czech and Russian opera arias - I picked it up for a dollar when we spent a New Year in Prague a year after the Velvet Revolution. Vaclav Neumann conducts the Czech Philharmonic.

Parallel with the opera, we're also listening to some of the Pushkin text, in both the English translation of Charles Johnston and the Russian original, in two recordings featuring the very beautiful incidental music provided by Prokofiev for a 'stage realisation' of the verse novel intended for the centenary year of Pushkin's death, 1937, but destined never to see the light of day (Prokofiev repurposed much of the music in War and Peace as well as several other later scores).

We treasure the reading of Wests Timothy and Same, and Niamh Cusack as Tatyana, in Edward Downes' realisation on Chandos, but I thought it might be most interesting for you to hear Tatyana's letter to Onegin as read by Chulpan Chamatova, with the late Mikhail Jurowski conducting the Berlin Radio Symphony Orchestra in the music that occasionally punctuates the text. You can have your English translation to hand if you need it. I originally found the recording broken into tracks, which would have been most convenient but doesn't work in this format. Here's the whole thing. The Letter begins at 15m32s.

Meanwhile on Thursdays, the Sibelius course is taking us all deeper and broader than I could ever have imagined. The most recent class, 8, featured not only the String Quartet 'Voces Intimae', which I'm getting to know and admire better, but three orchestral works I love most of the so-called tone poems, all composed within a relatively short space of time. I am now obsessed with hearing them all in a single Sibelius half of a concert programme. Luonnotar for soprano and orchestra is the creation myth, and could be followed by The Bard, a voiceless singer strumming his lyre until the sound of primitive lurs summons him, a kind of Ragnarok that goes profoundly within; and then one could have the purification of water in The Oceanides.

Well, I can dream, can't I? Now there are four more summer term Zoom classes to go, then a break, then the Wagner Society of Scotland wants me to start up with Die Meistersinger on 3 August, another luxuriant course of 10 classes. More of that shortly.

What a wonderful selection. Sad not to have been able to join you.

Is that Sebastian C or Seb S?

Are you zooming from Dublin or back in London?..I had a wonderful time in nice with noel 2 weeks of bliss

Came back from Dublin shortly after my (60th) birthday, with Bloomsday just afterwards - friends who came enjoyed it all. Back in London now - J was at Dublin Pride yesterday, there's a pic on Twitter but not crediting him - and off to the East Neuk Festival next week. Glad you had a good time - was Nice not rather too hot?

It eas the coolest spot in France just 30/31c

All that murder and persecution of gay people, so irritating. He who lets his pride rise etc... I also don't like the whistleblowing and haven't been on a march since the over-commercialisation, but I should certainly have joined the Dublin one - lots of children and pets, it looked delightful. And doubly necessary on the heels of the Oslo killings.

It was a pleasure today to receive your final playlists from your superb Sibelius course, and a pleasure also to be reminded of the glorious hr-Sinfonieorchester/Paavo Järvi performance of the 7th Symphony. As I listened this time, I thought, no, Mahler was right--a symphony must be like the world. Sibelius actually proved his case (I thought) with the 7th.

Thanks so much, Sue. Your feedback after each Zoom film has been treasured and preserved. The discussion with Oslo trombonist Audun Breen reminded me that the Second Symphony is very definitely 'like the world'. Hope you can get to hear the amazing Oslo Phil Prom performance of 'Tapiola', which is the opposite - concentrated dread and terror.

Would love to hear that Tapiola. I think I saw a couple "bootlegs" of it on Youtube, but wonder whether there is/or will be an official BBC Proms link?

I understand you can't get BBC TV in the states, but surely you can access Radio 3? Every Prom is on the BBC iPlayer. Let me know if you need the specific link. I don't suppose it's very different from the performance on the CD set. Interesting to hear the Seventh Symphony last night in a much leaner-sounding performance from the BBC Scottish Symphony Orchestra and Thomas Dausgaard.