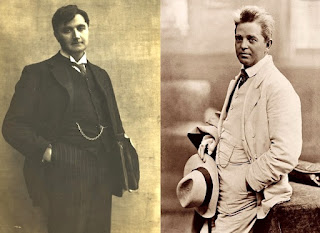 What an enriching term it's been on the orchestral front (opera, too, but that's another story). The ten autumn classes on the British symphony from 1907 to 1960 had anniversary genius Vaughan Williams at the core. I came to love those of the nine symphonies I'd either had a problem with - the Third and the Fifth, so much more going beneath the surface and not at all the placidity I'd imagined - or didn't know well (above all Eight and Nine).

The biggest revelation was how much VW can extract from a couple of chords or an enharmonic shift, often with a distinctive turn of phrase above them. You've got a colossal case right at the start of A Sea Symphony. And then I realised that the stomach-flipping sequence towards the end of Pastoral Symphony's exposition - in that case, B flat minor to G major and back - fuels more explicit conflicts in the embattled symphonies to come. Deryck Cooke made a brilliant analysis of the Sixth focused on the essential elements of musical vocabulary it exploits so originally. Even the English-idyll intervals which can sometimes get a bit repetitive (think Lark Ascending) can be transformed according to the harmonies under them - the melancholy-hallucinatory Ninth is a striking example. 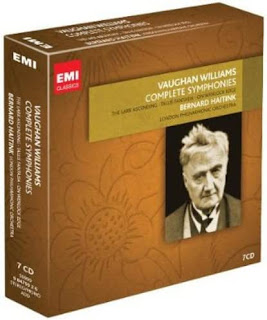 The big enigma remains about the multitudes contained within VW's outwardly lovable and wholesome personality. Whence all that violence and discontent in 4, 6 and 9 especially? He rarely discussed his music in autobiographical terms, though John Bridcut's documentary puts its finger on some of the "passions". I think second wife Ursula gets too big a role, but the frustrations he must have felt looking after the invalid first, Adeline, immobilised by arthritis. I wonder if some of the floating wastes have to do with her frozenness. Telling that after her funeral he came back and threw a chair across the room in rage. Just came across this photo I hadn't seen before of them together back in 1917 (and of course VW's service in WW1 must have been another source of anguish). 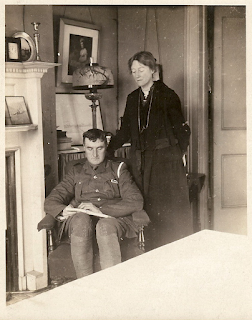 This was also a good opportunity to listen more intently to the cycles I had to hand - Boult's and Handley's. And then at a lateish stage, when I found YouTube helpful for showing the score above another performance, I discovered Bernard Haitink's recordings with the London Philharmonic: surpassing the others for the intensity and extremity of the pianissimos, the tonal beauty throughout. Haitink doesn't often do electrifying, but his Sea Symphony is just that. What a remarkable range of sympathies he had.

A student who didn't join last term told me I needed more than 10 Thursday afternoons to accommodate other figures on the scene. But by stopping at 1960, I ruled out the later Tippett symphonie (which baffle me) and more on Malcolm Arnold. Still, while I know his Second and Fourth Symphonies well, the First came as a revelation. The first movement has great gestures, but the finale is a tour de force from start to finish. This is an electrifying performance from Rumon Gamba and the BBC Philharmonic not available on CD.

There's an even more sophisticated brilliance about Walton 2, which reveals more every time you hear it. I still don't think I've grasped the slow movement yet, but the others show this fastidious composer adding to his palette and making forms which take the art of the symphony in yet another direction.

Let's see if enough folk are attracted to the next term, focusing on Nielsen's magnificent six, but with more than sideways glances at Berwald, Stenhammar and Langaard. Here's the flier: click to enlarge for details and let me know if you're interested. 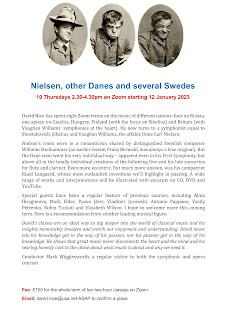 Are the VW Zoom classes online anywhere? Would love to watch, listen, and learn. Thanks!

You can always get the videos from me at a reduced rate. If you leave your email in a comment, I won't publish it but I'll get in touch. That's the beauty of Zoom - everything can be recorded and archived. Students who can't make it live can always catch up that way, too.

David the things I learn from you. Such knowledge you posses. Best wishes to you and J. For the new year. Laurent

Thank you, Laurent - you should join the class! Wondering if Will will - hoping he's much recovered.

Robert - I did send you an email, did you not get it (gmail can sometimes be a problem, so I'm putting it in the post here as well as resending)?

Have you had a chance to listen to any of Fabio Luisi's new DG recordings of the Nielsen symphonies? Also, wasn't sure if you already knew about a great comment by Sakari Oramo in a Bachtrack interview, to the effect of Nielsen's music being "so strongly constructed that there’s very little room for a conductor’s ego":

Luisi is a master conductor, but I think from live experience that his Nielsen might be lacking a bit in temperament. Great comment indeed from Oramo. I'm sticking to Neeme, Gilbert and Bernstein. Just been discovering Saul and David, which I saw in Copenhagen and want to know better. Amazing work, again very taut and direct.