Zoom courses: from Lucretia to Rosenkavalier 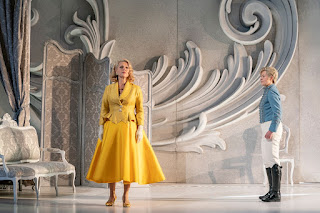 "S'ist mein Leiblied' - 'it's my favourite song' - declares Baron Ochs in Der Rosenkavalier of his signature waltz-tune. By the same token, Rosenkavalier is probably my Leiboper - certainly the one I know best, the intricacies of which, in both Hofmannsthal's libretto and Strauss's music, seem inexhaustible. This coming term's Zoom course, starting tomorrow (9 January) will be my third visit in the opera classes, but since the last time there have been new recordings and new productions on video (including Bruno Ravella's for Garsington, the exquisite and Grace-Kelly-stylish Miah Persson's Marschallin and Hanna Hipp's fine Octavian pictured in it above by Johan Persson; Irish National Opera takes on this staging in March with a fine cast led by Celine Byrne, the fabulous Paula Murrihy and Claudia Boyle). There's always more to discover. And as always when I repeat a classic, I don't look back on old notes.

Last term ended rather more positively than I was expecting. I'd been reluctant to revisit Britten's The Rape of Lucretia, so whittled it down to three rather than five classes (Rosenkavalier will have seven, Korngold's Die tote Stadt also three). Ronald Duncan's often excruciating libretto troubled me even more in Oliver Mears' production when I saw it at Aldeburgh. 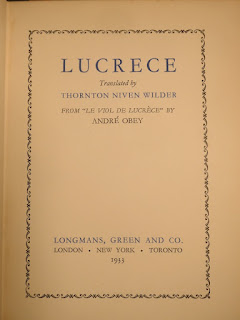 I'd always wondered about André Obey's play Le viol de Lucrèce - about which all the contributors to the Rape of Lucretia symposium book I picked up are so cagey that an addendum slip had to be printed giving it proper credit. Then I found that Thornton Wilder had translated it in 1933. Surely Eric Crozier, at least, knew this? It's so much better, in every respect, than the drama Duncan fashioned. For a start there's no Christian overlay. There ARE two narrators, a man who follows Tarquin's progress, a woman who reflects Lucrèce, but they don't appear until Obey's second act (the first has two soldiers relay, chorus-like, what's going on in Collatine's tent). The aftermath is much more acceptable today: Lucrèce as powerful tragic heroine, knowing that her divulging of the rape will trigger Collatine's vengeance and a Roman uprising, not some self-disgusted victim.

At the beginning of the last and third class I continued the comparison between opera and play. But joining us were Jean Rigby, the most moving Lucretia I've ever seen on stage, and her husband Jamie Hayes, who'd directed the work for British Youth Opera. Jean had already instigated a kind of cast reunion of the original Glyndebourne Albert Herring - since I don't seem to have written about it here, I must boast about the other visitors: John Graham Hall, Alan Opie, Felicity Palmer, Alexander Oliver and Felicity Lott (who sang Lady Billows in a revival) - and I knew what a fun and generous person she is. 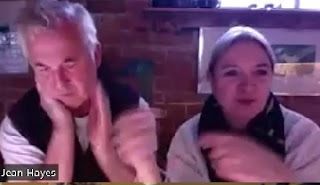 Everything Jean had to say about the circumstances around that remarkable Graham Vick Lucretia at ENO back in 1987 informed what we were about to watch - namely Act Two from the moment Tarquinius awakens Lucretia to the end of the opera. And the film itself was testament to how, when every singer has worked on phrasing and meaning so intensively - not just Jean, but everyone else in an extraordinary cast - reservations about the infelicties of the text vanish in the face of such consummate music-making, such singing-acting. The whole film is available on YouTube but in a fuzzy picture, so I recommend you get the DVD. 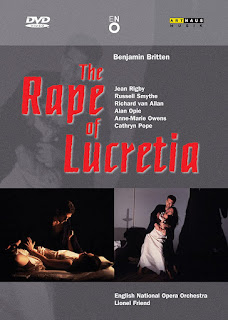 We were blessed with our guests this last term. I'm so happy that John Savournin, our most innovative living Savoyard as singer and director, was able to join us for the two classes on The Yeomen of the Guard (I still didn't manage to persuade two students that G&S is worthy of keeping company with the best). John's brilliant re-imagining of Patience for nine singers at Wilton's Music Hall was the big surprise in my operatic 'Best of 2022' for The Arts Desk. When we spoke he was preparing for the last performance of Golijov's Ainadamar at Scottish Opera, a production I long to see; hence, I think, the moustache. 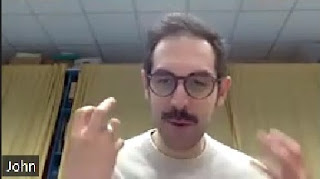 And right at the end of the five classes on Verdi's Aida, I suddenly remembered that Tamara Wilson, one of the most generous of guests way back when I was still giving live classes at the Frontline Club and she was performing Leonora in The Force of Destiny at ENO, had sung the title role all round the world (but not, sadly, in the UK, and after a bad experience in Verona which I think may have had to do with a refusal to sing it in blackface, as the vile Netrebko recently did, she has retired the role from her rep). 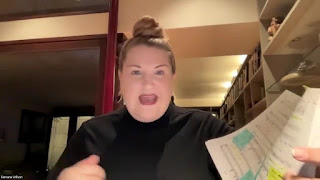 When we met online, Tammy was preparing to revisit the role of Turandot, this time for Barrie Kosky in Amsterdam (I was so hoping we could go and stay with our friends there, and see it, before Christmas, but too many hospital appointments got in the way). I remembered how revelatory she had been on the previous visit about how she marks up the score, and includes intentions, and so requested she did the same here. The 'intention' behind 'straniero, ascolta!', for instance, reads 'feel pleasure that I'm going to kill him'. 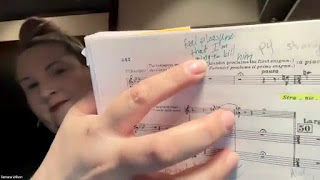 So yes, what fun we had. And I'm hoping we'll be able to welcome at least one Marschallin, Octavian, Sophie and Ochs to the Rosenkavalier sessions; watch this space. Still not too late to join if you can - from anywhere in the world, time depending. And if you can't make the class, you get the video. Full details below; click to enlarge. 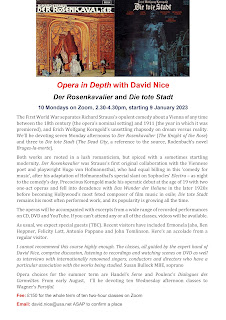 Had the pleasure of seeing Tamara Wilson in performance at Santa Fe Opera last summer, the production of Tristan, very well done indeed. She also participated in a fine song recital near downtown Santa Fe.

Wasn't aware of all your health travails; hope that you're doing well, given the circumstances.

Did see the video of Bruno R.'s Rosenkavalier from OperaVision a while back, with the reduced orchestration (like in Barrie Kosky's audience-free version for the Bavarian State Opera). Very much enjoyed Miah Persson, Hanna Hipp, and Madison Leonard; wasn't so thrilled with Derrick Ballard's Ochs, but just my own opinion. Another Rosenkavalier looks available on OperaVision, which I should watch in due course.

Way off-topic, on the Mahler 6 count: I noted reviews of Lahav Shani's recent Philharmonia Mahler 6, where he went S/A (whew). Will watch for word about Karina Canellakis' RFO performance in a few weeks, with fingers crossed. There look to be quite a few Mahler six performances this year, with conductors like Bychkov, Lorenzo Viotti, and MTT in addition to Karina C..

Lucky you! Tammy hasn't been back to the UK since her Forza Leonora, the last act of Valkyrie at the Proms and the Verdi Requiem. Such a stylish and intelligent artist. I really wanted to see the Turandot in Amsterdam.

I like the second and third acts of the Ravella Rosenkav (the first isn't very nice to look at). The Nichieletto Rosenkav on OperaVision I skimmed and didn't like it at all, starting with lamps on during the dawn chorus - there are certain things that should be observed in the score. Stagings now tend to be more minimal, rather against the spirit of the baroque stage directions. I do like the Kupfer from Salzburg. The ones I'm using are Jones's at Glyndebourne, Schlesinger's meticulously detailed Royal Opera production with Kiri and Solti, and Dresden Staatsoper in Japan with Schwanewilms, in every way the loveliest of Marschallins.

I've not heard good things about Shani (like conducting with his eyes shut, a la Karajan). What's S/A?

Thanks for good wishes - eight radiotherapies down, four more weeks to go. So far not too bad.

Sorry; S/A = Scherzo/Andante. The last Mahler 6 in STL was back in 2011, with Bychkov. The printed program had Andante/Scherzo, but on the night(s), a separate insert said that Bychkov decided to go with Scherzo/Andante (again, whew). Not sure if Stephane D. will get around to Mahler 6 at some point with the SLSO. I recall a BBC R3 relay when he led the Stuttgart Radio Symphony in a tour performance in the UK, with the Scherzo/Andante inner movement order.

Have never seen Lahav Shani live, but it does look as though Munich will start seeing plenty of him soon enough, starting in 2026. Rotterdam will need to start looking again, but such is life.

Did also watch the Richard Jones production from Glyndebourne's quarantine video stream during isolation as well.

I think we've had this conversation before, but 'S/A' makes total sense to me - scherzo dance-grotesque replay of the first movement, Andante as necessary repose after that and before the massive finale.

Curious to know what you thought of the Jones Rosenkav. I've been using some scenes for the classes, but yesterday it had to be FLott/Von Otter/VPO/C Kleiber for Act 1 soliloquy and parting scene - everyone adored this Marschallin, so graceful and real - and Bonney/Howells/Solti in the meticulously detailed Schlesinger production for Act 2 opening and Presentation of the Rose.