A drink at the local 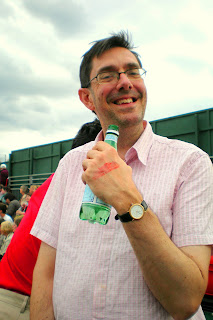 ...which in my case, at least for one week a year, happens to be the Stella Artois Tennis Championships at Queen's Club. We locals have free admission after 5.30pm, on condition that we trade in our letters for a hand-branding, visible above but better seen in close-up thus: 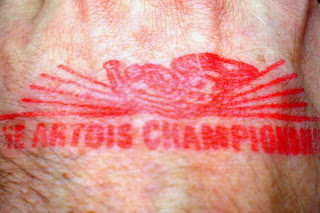 But what am I doing writing about this here? Trying to please the Minister of Culture and Sport, or showing just how branche I am (and please note that this is the very non-sporty person who once won Trivial Pursuit on a football question, dredging the name of Franz Beckenbauer from memories of his childhood when he briefly tried to join the mob)? You can see from the below photo, as Jamie Murray strolls in front of it, that this was after all an ARTISTIC event. 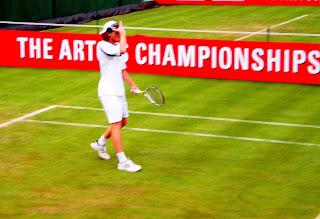 Well, it was very involving, huge fun. Having decided not to queue for the centre-court £5 charity sell-ons, my regular QC companion Cal and I found ourselves outside one of the free public courts, No. 2 I think it was, just as a men's doubles match was about to begin. So we had just about the last seats for Hewitt and Guccione vs. Jamie Murray (Andy's one-year-older brother) and the tall, strapping Mirnyi. Of course I was soon backing the more handsome pair (the latter), and good tennis it was indeed; having lost the first set, Jamie and Mirnyi finally won on another tie-break. While QC tends to be full of ladies of a certain sort from the Home Caynties, we had good company: a nice Scots woman to my left, who kept on muttering 'come on, Jamie' sotto voce until excitement got the better of her, and two very vocal Aussies behind whose loud encouragement soon dwindled. I ended up shouting and sighing too. Here are the nice boys all leaving the court:


All this in two hours - the game finished just after 8 - so it satisfied my sporting spectatorship for another year (though I'll always go to a football match if someone stumps up the tickets, as our West Ham-oriented friend Nick did a couple of years ago). ADDENDUM: the handsome lads bowed out in the semi-finals, apparently. No intelligence about the winners.

Last of the player visitors on my BBC Symphony Orchestra course at Morley the following evening was a regular, Richard Stagg the flautist, who brought along a couple of shakuhachis. These deeply eloquent instruments - the name translates as '1 foot 8'- are slightly frowned upon by Japanese audiences, as Richard discovered on the first of his many visits to Japan. Here's a section of one (it looks big, but is nothing compared to the san-shaku, three feet long and apparently needing the player's toes to cover some of the holes). 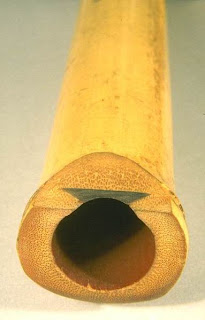 In fact I wished I'd taken my camera along, especially as Richard had a piece of music notated entirely in katakana or samurai script. The work in question, which translates as 'The tenderness of cranes', sounded astonishingly modern in its bird-sounds (imitating the mother crane nurturing her young before they fly the nest). Yet it was first played over a thousand years ago, and notated at the end of the 18th century. Richard has recorded it, and I intend to find a copy, though sadly it's not on his compilation, which I think I'll get hold of anyway: 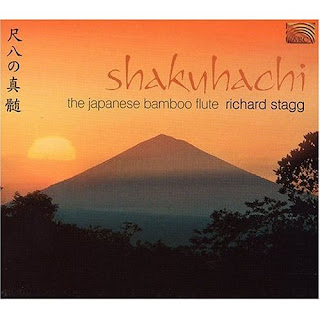