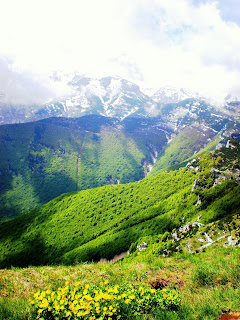 Any excuse, I know, to post yet another shot of my own delectable mountains, the Maiella range of Italy's central Abruzzo. Yet they did come vividly to mind at a point in Thursday's dress rehearsal of Vaughan Williams's The Pilgrim's Progress. I'd already been shedding tears for almost as long as I once did in Act 3 of Meistersinger (Norman Bailey as Hans Sachs). Then along come the Shepherds of the Delectable Mountains, who tell our pilgrim 'here the air is very sweet and pleasant, here you shall hear continually the singing of birds and shall see every day flowers appear in the land.' The Maiella moment was stretched to breaking point when a bird (the flawless Sarah Tynan) piped up with 'the Lord's my Shepherd'. Evidently VW was not averse to lying around on hillsides, either, as this 1929 photograph reproduced in the Proms/all-about-VW issue of the BBC Music Magazine goes to show: 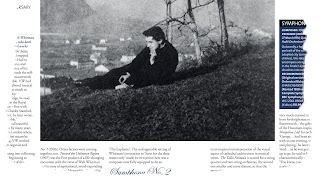 Yes, the opera is a masterpiece of its kind, so long as you succumb to VW's protracted spiritual mode (which I certainly did in the astonishing Passion sequence and the fourth act). What heightened my emotions that morning, though, was a chain of events determined to remind me of time passing. I was 46 on Sunday - consort says 'four to six' - and I, as well as he, have been constantly meeting with faces from the past. The Philharmonia production was staged by David Edwards, who directed us in the not-so-great Poisoned Kiss 21 years ago, and the same designer who'd made such a thing of beauty out of the Cendrillon production the year before that, Colin Mayes, was again at work on the costumes. Margaret Gibbs, our MD, was in the audience, too, and I went with a friend made in those far-off days, Isabel, having met up with another, Claire Suthren, at my birthday picnic in Chelsea Physic Garden on Sunday.

Eliding what guests unfamiliar with this wonder had to say about it, we now dub it 'the psychic garden of Eden'. It was, in short, a very happy afternoon, and I was more than happy to take posses of kids round and round the pocket-handkerchief garden to look for newts, dragonflies, the famous cork tree, venus flytraps and more echiums to complement the Glyndebourne display last week (see below). Here are Claire and her middle offspring, Rowan, admiring them: 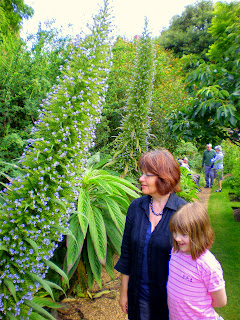 A little more now, though, on Pilgrim. My VW discovery, like that of so many others this year, sweeps on apace. Although I usually have problems with Hickox and his rhythms, I thought he had real feeling for the work. The cast could not have been stronger: Roddy Williams hits the blog for the second time in recent months with a truly great performance, and a demeanour that tells you he has to be a nice person. There were three leading, if cathedral-y, tenors - Andrew Kennedy, James Gilchrist and Timothy Robinson - and a hair-raising cameo from Gidon Saks as Lord Hate-Good. Mezzo Andrea Baker, a singer I've not come across before, stood out with a voice and acting of real individuality. As for the production, David adopted the maxim of 'less is more', avoided tweeness with certain Indian garments and hit the nail on the head, so to speak, in the very painful Vanity Fair/Passion sequence (tough music here, as in the Sixth Symphony). The Times photographer won't release her shots yet, so in the meantime I took the liberty of a stage view at Sadler's Wells after the rehearsal, as Hickox and Roddy Williams were about to go over a few points. The plywood panels, complementing the rather stark interior of Sadler's Wells rather well, were an inspired idea.


It was a perfect June day. Afterwards, drying our eyes, Isabel and I walked away from the theatre and came across a hand-made sign advertising 'Dino's Italian bar and pizzeria - outside garden'. So, taking a risk on food (we only wanted a snack), we plumped for the garden. This place in St John Street, the windy road leading down eventually to Smithfield Meat Market, is a gem.


The owner has only recently extended his premises to run to grub - OK, so it's not gourmet cuisine, but our pizzas were just fine - and there's a yard with bright Italian murals where we sat being regaled - and quite happily - with Dean Martin and Italian 50s hits. And so from monte to mare (or almost). 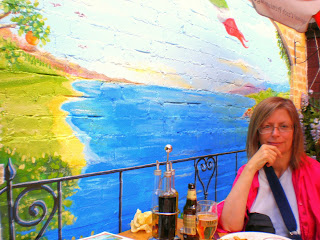 What a great day out in the middle of my labours over the latest Radio 3 Building a Library. I've now listened to every note of my eighteen and a half versions of Rachmaninov's Op. 39 Etudes Tableaux; but I have to keep my mouth shut on the choices until 5 July, the broadcast date.
Posted by David at 20:43

Strange as it may seem, this morality might still remain my favourite work in the whole of Western serious music, and I am privileged to own both the Boult and Hickox recordings of it, and, though I have not played it in full, a cassette copy of the Royal Northern College of Music's acclaimed production from the early 90's.

Mr. Williams is a singer I admire, having him in some VW, notably the fairly-recently-recorded and, I feel, exquisite _Willow_ _Wood_. It would have been interesting to hear how he did in comparison with the _WONDERFUL_ Mr. Finley on Mr. Hickox's recording, though his expressivity could well have carried the day. I am a bit sorry that my favourite current soprano, Miss Gritton, did not repeat her contributions to the recording in these performances, but at least I have the latter, though former in actual chronology! I look forward to more from Mr. Kennedy, thinking he could well make a _SUPERB_ Gerontius, based on the job he did in the Naxos recording of Elgar's _The_ _Spirit_ _Of_ _England_! Do I assume that he was the Lord Lechery? Mr. Hickox is to be given _MUCH_ credit for championing this work in recent years, possibly now having conducted it as much, if not more, than Sir Adrian did, and the Philharmonia deserves credit as well, though, on a non-musical note, I personally do not care _AT_ _ALL_ for their familiarity with their online subscribers!

I am a regular listener to parts of _CD_ _Review_ each week, notably to the "Building A Library" features in which I am interested. I do not yet know which David you are, but may well have heard you previously.

Hoping that this finds you and your readers well,

p.s. For what it is worth, I am legally blind, and thus need to use screen-reader software to navigate and write on the Internet and in E-Mails. I am _MOST_ pleased to report that your blog's writing fields are, unlike many (regretably including those in my own blog, which I had set up without knowing whether or not my colour/background choices were compatible), is compatible with said reader, thus allowing me to proofread and correct (and I needed to correct a couple of errors in the main post as well as making at least two changes here)! If you would care to say, what colour/background do you use here, which information could well help me set things up differently, both there and on this machine where possible?!

Greetings to you too, JV. I'm delighted you found your way here - through La Cieca, no doubt - and that you have long known what it took me Thursday morning to discover: that The Pilgrim's Progress is indeed a great masterpiece. In fact here in the UK we have been extremely lucky to have so many opportunities to reassess RVW, and the Proms will give us quite a few more.

Andrew Kennedy did indeed sing Lord Lechery, and a Celestial Messenger too. What worries me about all these English Cathedral Tenor voices, though, is that they are pushed to sing heavier operatic repertoire and the top soon loses its sweetness and focus. He seemed the most solid of the three (or four, if we include Richard Coxon, a good actor).

Sorry I can't help you about the background - I don't know whether this was set up for me, or whether it all came ready-made, but I followed, I think, the blueprint of my friend Sophie Sarin on www.djennedjenno.blogspot.com, and she might be able to help you.

Best wishes with your selective repertoire - and I'm glad you do reverence to Sir Charles Mackerras, one of my all-time most respected conductors.

I was, in fact, referred here by my Google Alert for VW, my only visit to date to La Cieca's blog having come via that, or another, such Alert.

I think you are the second person who has indicated that I may have misassessed Mr. Kennedy's voice. I had him "pegged" as an Italianate lyric tenor at least, and thus felt he would make a fine Gerontius since Elgar seems to have wanted something resembling that sort of voice, or at least one with strong passion in it, which I heard in Mr. Kennedy's performance in _The_ _Spirit_ _Of_ _England_. Is he not considerably different from, say, Mr. Gilchrist? There is something which bothers me a bit about the latter, but I cannot yet fully put my finger on it as it were. It _MIGHT_ have been Mr. Robert Hugill, whose blog, _Planet_ _Hugill_, I hope you know, who was the other to set me straight about Mr. Kennedy, and I eagerly look forward to his review of one of these performances of _Pilgrim_ at such time as it appears!

Speaking of both the Proms and Sir Charles as you did, it should come as no surprise that the one Prom to which I look forward more than any other, though certain of the VW ones, etc., cannot be overlooked, is his scheduled 16-August performance of Handel's _Belshazzar_! This is one of my favourite Handel oratorios, and I hope he does better with it this time than I felt he did with the Milwaukee Symphony in 1981. It would appear that at least this performance will be more complete. Though this is by _NO_ means its only virtue, I find more "good tunes" in this work than in any other single Handel work I currently know, and that may be saying something, given what a _SUPERB_ melodist he was!

Now that I have found out who you are, it is good to have crossed paths with you again, and perhaps I should seek out at least your book on Elgar!

With _MANY_ renewed thanks and best wishes,