Yes, I know it's not a silver rose, but this perfect specimen from the south side of the Gardens does seem to sum up the dreamy Straussian world in which some of us have been intermittently living for the past five weeks. I'm very proud of my Rosenkavalier classes at the City Lit, as I think I know this opera now better than any other and have unearthed countless interesting snippets - looking backwards to Strauss's other works, where there are many passages explicitly recreated in the opera, and forwards to composers as unlikely as Schoenberg and Britten. I even got hold of a copy of the 1926 film, with live accompaniment of Strauss's cobbled-together remake by the Staatskapelle Dresden and Frank Strobel (who does the same in Liverpool in a couple of weeks' time). The film's no masterpiece, but it is extremely interesting and I've managed to arrange an extra session at the City Lit to screen it.

English National Opera's first-time staging of the much-in-demand McVicar production was the payoff (though we've still one more class on the second half of Act Three to go). It wasn't perfect - we have seen too many all-time greats on DVD and live: the Marschallins of Dames Gwyneth and Kiri, the Octavians of Fassbaender and Kirchschlager, the Sophies of Popp and Bonney. But I've never seen a Rosenkavalier where all four principals were equally strong. Tomlinson's ease on stage makes up for his rather coarse, not often likeable Ochs, while Sarah Tynan's beautifully detailed Sophie is a credible teenager and grows up rapidly in the course of the drama; no cipher she. Most of the critical praise was lavished on Sarah Connolly's Octavian. I found her handsome indeed in middle range, a bit stretched by the soprano top of the role, and too confident for an impetuous boy - this Octavian would be in his early twenties at least. Janice Watson has evolved with great subtlety as the Marschallin: she's not aristocratic - in any case the lady 'married in' - but she is very, very feminine and soft to melting point in Act One. Here are the two, not quite sensuous in their bedroom scene together but a handsome pair all the same, as snapped by Clive Barda for ENO: 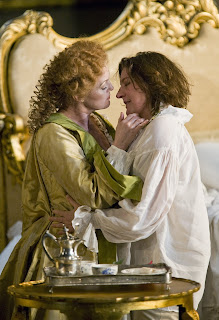 The second act came and went in terms of pace. Ed Gardner in the pit does so many interesting things, and knows the ENO strings can't reproduce Viennese bloom, so he made the waltzes more 18th century than usual (if you forgive the paradox, which of course is Strauss's). He did the Act One soliloquy and curtain with great refinement, but lost some of the momentum in Sophie's second duet with Octavian. The Presentation of the Rose, though, was a dream, and much helped by the dazzling Cavalier's costume: 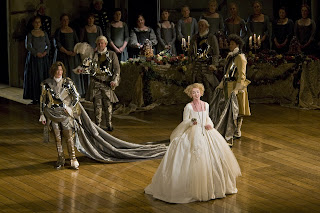 Everything knitted together beautifully in Act Three, which for once didn't seem a moment too long, kicked off by a bewitching sight-gag with the orchestrally illustrated candles which I don't remember from the Scottish Opera original, and the first quarter of an hour was much enlivened by Connolly's northern 'Mariandel'(genuinely funny for once). The 'sublime chords of tenderness', as Strauss described them to Hofmannsthal, were certainly touched in the last half-hour, and not just in the Trio. A quality show indeed.

Talking of which, I was reminded for some reason of the Marschallin's high style in the latest exploits of our Sophie Sarin, muse of this blog. She's taken a few months away from her Hotel Djenne Djenno in Mali (see last year's entries) and has been designing more bogolan fashionwear, modelled here in Sweden by herself and her very game mama. As she says on her blog (www.djennedjenno.blogspot.com) the hats might seem de trop, but they weren't supposed to go with the dresses. 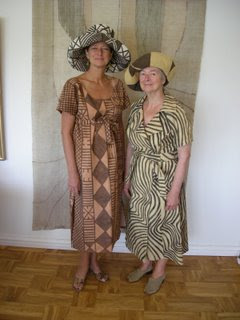 As a timely transition to the Cinderella world below, here is our Sophe newly arrived chez nous, bearing from Holland not a glass slipper but a marzipan-and-chocolate one: 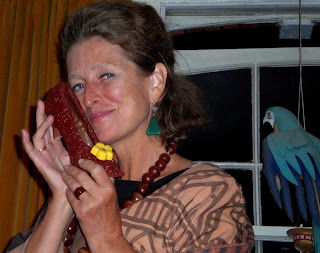 So - I had expected something of the Rosenkavalier sound in Chelsea Opera's concert performance of Massenet's Cendrillon, a real plum pudding of an opera in which I sang 22 years ago with City Lit Opera (that great cosmopolitan mix in which I made three good long-term friends and met the love of my life). With a mezzo Prince and a coloratura Fairy Godmother, Massenet's recipe for women's voices is at times almost as intoxicating as Strauss's. But Liora Grodnikaite, who'd lit up the stage as a replacement Varvara in the Royal Opera's Katya Kabanova, didn't quite get her big and vibrant voice into gear until the Wertherish Third Act, and the lovely Emma Selway sounded a bit less than her lustrous best. Still, Judith Howarth was a very meaty songbird, Elizabeth Sikora turned in a superb French comedy turn as Madame de la Haltiere and Dominic Wheeler, whose Gotterdammerung at ENO was one of the finest experiences of Wagner conducting I've enjoyed, sharpened up the largely amateur Chelsea Opera Orchestra and Chorus.

Dramaturgically the piece is a bit unwieldy, but all the music is good, the ballet music at the palace is beautifully crafted and there's a delicious last-minute bonne bouche in the shape of the Marche des Princesses, a Beecham lollipop if ever there was one. Covent Garden simply must do the opera; a dream cast recommends itself - Garanca as Cendrillon, Kirchschlager as the Prince, Dessay or Damrau as the twittering fairy and veterans Tomlinson and Felicity Palmer as the ill-matched elders. Pappano's French delicacy would be a wonderful asset, and I wonder if the very selective Richard Jones could be persuaded to take on this piece of enchanting froth?
Posted by David at 11:10