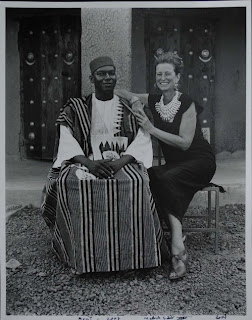 Of course she takes to the camera like a duck to water; how could she not, after her early years as a model in Paris? But our dearest Sophie achieves a crowning glory as the Australian Broadcasting Company gives her over ten minutes' worth of guiding in its excellent Foreign Correspondent two-part documentary Mali - The Road to Timbuktu.

As readers of this blog will know - and, I repeat myself, Sophie's djennedjenno was the prompt - the latest and perhaps the most enduring of her multiple incarnations has been as hostess of her own specially mud-built hotel in the central Malian town of Djenné, a place of culture and history which as she points out in the film is a hundred times more beautiful than Timbuktu. There she is above with husband Keita snapped by the consummate - and ever-modest - Malick Sidibé when he came to Djenné.

The route taken by the film crew is the one formerly travelled by many visitors like ourselves, including the toughest leg by four-wheel drive across the Sahel and ferry across the river Niger to Timbuktu. 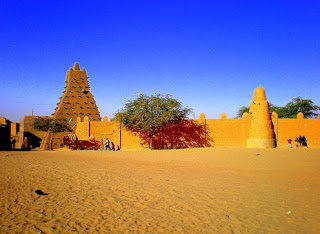 But circumstances are now, of course, very different. The French have essentially driven out the Islamic extremists but incursions remain; the night after this film crew left Timbuktu 11 people were killed in an attack on the hotel where the ABC folk had been staying. It hardly needs adding that the Al-Qaida affiliated insurgents' extreme brand of Islam is one nearly all Malian Muslims reject.

Ridicule is one answer: the film shows walls of Timbuktu shops in which the faces not only of humans but also of camels have been painted out. Malians, moderate and tolerant in their religious practices, simply can't understand it. The peaceful scene below was prayer time at Djenné Mosque during the religious festival of Tabaski, with which we happened to coincide on our Christmas visit. 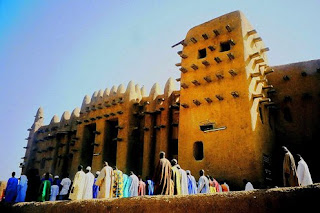 I like documentary presenter Eric Campbell's good humour as well as his instinct for getting the right facts and talking to the right people. His cameraman, David Martin, captures much of the indestructible treasure of Mali as well as the horrible legacy of the recent past (some of that also featuring on surprising wartime footage). And let's not forget they were travelling at considerable risk, despite the armed guards. Anyway, they arrived safely back in Bamako, where the film ends with coverage of Sophie's 'surreal', once-postponed fashion show. Her chunk of Part One, which can be seen - I link once again - here, runs from 11'56 to 19'27.

You'll surely agree she comes over very well indeed, and  the range of what she's done for Djenné is well represented, from the weaving to the invaluable work in the British Library-funded manuscript library. The upshot is good business for malimali.org from Australia, and certain proposals, she says, from several Sydney businessmen (Keita can see them off). 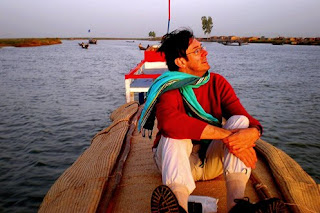 In the meantime I withdraw again from the Malian scene with a memory of one of the best stretches - a moment of post-dawn bliss on our two-day pinasse journey down the Niger from Timbuktu to Mopti. That's not an experience anyone will be repeating again in the foreseeable future.
Posted by David at 11:10

I have just listened/watched the documentary a third time, with continuing pleasure and learning more each time. As I think I noted earlier Sophie's way, I was particularly struck to realize that the malimali fabrics themselves were endangered. (I should have realized this would be the case, of course.) Such a beautiful place this is, and I would not have known of it and of Sophie and her blog and many important activities, including the mss project, had it not been for you. The photograph with which you close is perfect as a memento of your own trip to Mali.

I hesitated whether to include it again, Sue, as I really don't like sticking up pics of ME. But I did explain what a happy portion of our not always easy holiday it captured, and truth to tell I had very few pics. I'd just bought the miniscule Olympus which has served me in good stead for pointing and snapping ever since, and hadn't twigged you needed a memory card (!) - so I had 36 images on the camera to play with. Plus my antique Canon, the fallback, also packed up...Hence the recycling.

I know you and Sophie would get on, as of course would we. I don't suppose I'd ever have the stamina to do the Mali thing again, but some time in Europe...

Great picture of you David!

Of course what we both wanted was to be photographed by the great Sidibe in Bamako (his charges are still modest, I'm told, even though he's world-famous) - but his humble little studio proved too hard to find.

David Dearest!
Because of bad internet connection I have just managed to get to your blog and see this wonderful plug for Djenne, MaliMali and myself...I blush from so much attention and praise!
Many thanks and much love to you!xxxxxxxSophie in Djenne with Keita next to me waving enthusiastically to you!

Any plugging was quite incidental, dahling: I wrote about it because I thought it was a very balanced documentary, superbly filmed. That your bit might have seemed to those who know you like an ad for your many activities in Djenne was coincidental.

Anyway we expect 'African Hour with Sophie Sarin' once a week on the BBC.