Berg and Chabrier: scum and froth 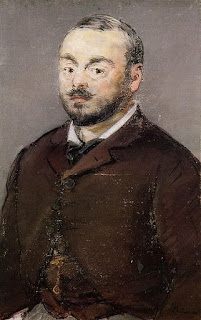 In Berg's case, I'm referring to the way downtrodden soldier Wozzeck is perceived by his crazy 'superiors' in what remains, perhaps, the 20th century's most shattering opera. And Chabrier's orchestral works, which I revisited as the most joyous corrective to trauma, may be frothy, but isn't that ability to lift rather than lower the spirits through melody and orchestration just as profund in its way?

As for the portraits above by Schoenberg and Manet, I couldn't resist a bit of quality artistry applied to musicians after what struck me as a rather bad Bryn portrait leading a blog entry elsewhere. I left a rudely jolly, or jolly rude, comment yesterday, wondering why musical portraiture is so poor these days (Adam Birtwistle's Glyndebourne stint being much the worst - at least this one's recognisable) but publication was not forthcoming, nor do I think it will be. Don't take it personally, Jessica, it's only my opinion, and apologies if I was treading on any personal sensitivities.

Praise-laden warnings were rife about Carrie 'A Doll's House' Cracknell's production of Wozzeck for English National Opera: this will bruise and amaze you, they said. And they were mostly right. Dominating all was Edward Gardner's finest run at the Coli since Peter Grimes and Der Rosenkavalier (if only because all three operas demand the ultimate in their different ways). A perfect guide through Berg's spider-web of unforgettable themes, Gardner also gave the most achingly late romantic expression to the tragedy: you were never allowed to forget how much came out of Strauss and Wagner. So many folk had related how the two unison crescendos after the murder shook them to the core, which they did, and the, yes, D minor summary pressed the tearduct button from the off. 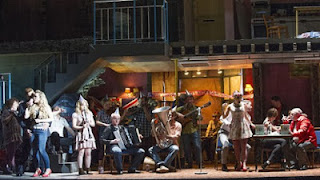 Not everything about Cracknell's update worked for me, but all of it was thought through (photos by Tristram Kenton for ENO). There's nothing in Büchner's stunningly modern 1837 Woyzeck or in the opera which follows it so faithfully about the barracks boys seeing active service, but post-traumatic, post-Afghanistan stress disorder is a way of making Wozzeck's delusions instantly understandable. The child was too old for the final scene to have its full effect. Nor had there been  any outdoors for Wozzeck and friend Franz picking up sticks or for the climactic scenes by the lake with a rising moon. But these last had their own fearful impact. 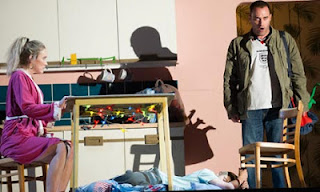 Wozzeck no longer wades into a lake - or an immersion tank (Warner) or a vat of baked beans (Jones) - to retrieve the knife with which he's killed Marie; he cuts his throat at the kitchen table. I couldn't look. But certainly the sense of claustrophobia reached its peak here. And the aftermath, with the Doctor (ex-Wotan James Morris) and the Captain (Thomas Randle, still in good all-round shape) looking outwards from downstairs, played its part in chilling the blood (the two pictured with Leigh Melrose's Wozzeck in the centre below). 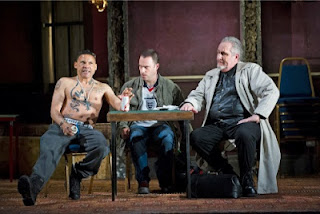 All the performances were strong, although I found Sara Jakubiak's Marie a tad undercharacterised, and Melrose could have made some of his longer lines more beautiful; the delivery was mostly very loud, the acting beyond reproach. 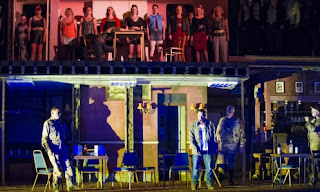 At the end, it wasn't my legs but my arms which had turned to jelly. I physically couldn't clap. And apologies to Guy, if he's reading this, for stonewalling him at the end, because I couldn't, didn't want to, speak for a good fifteen minutes afterwards.

It's too late to catch it now - the last performance was on Saturday - but, avoiding The Perfect American like the plague as I am (shutters down on Glass, and only Glass), if you want a rather more unexpected roller-coaster ride in an interval-less hour and forty minutes, go see Richard Jones's slyly skewed production of Ibsen's Public Enemy - aka An Enemy of the People - at the Young Vic. Having reviewed it for The Arts Desk, I should go again before it ends on 8 June. Below, the Stockmann brothers, played by Darrell D'Silva and Nick Fletcher, at loggerheads; photo for the Young Vic by Keith Pattison. 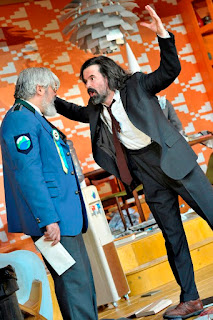 Nothing like a good dose of Chabrier to warm the blood, though. I was given the disc of orchestral plums at the Orchestre de la Suisse Romande's Festival Hall concert with the great Neeme Järvi the evening after I went to see Wozzeck. Järvi's not-of-this-world partnership with Boris Berezovsky, a pianist I've long wanted to hear live, in an unorthodox Grieg Piano Concerto turned out to be the highlight (the two pictured below at the concert by Jas Sansi), though there were masterly things as always about his Tchaikovsky Pathétique, including the best 5/4 waltz I've ever heard. 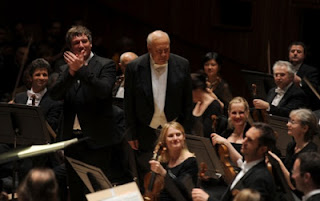 It was time for nostalgia: as in 1980, when a then unknown-in-the-west Järvi brought the Gothenburg Symphony Orchestra to London, an encore was Arvo Pärt's Cantus to the Memory of Benjamin Britten (in 1980, I'd never heard any of Pärt's music). That had the same slot last night. If only the audience, full of Swiss watchmakers, had applauded more vociferously, we might have had Chabrier as a second encore on this occasion (back in 1980 it had been the Alla Marcia from Sibelius's Karelia Suite). 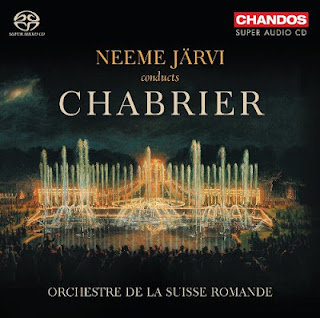 How else would these pieces get an airing beyond the world of CD? In my ideal concert, I think I'd have the Joyeuse Marche, with its lopsided rhythms and raucous glitter, at the start. Or would it be España, with its obsessive harping on the home key offset by orchestration as fabulous as Ravel's (a great admirer)? And could I have the lurching of the Fête polonaise from Le Roi malgré lui as my encore?

The recording which won me over was Ansermet's second (1964) Chabrier selection with the same Swiss orchestra; although that remains a key spirit-lifter, and its Fête polonaise swaggers in different places, Järvi has his own brisk glitter, a few characteristic charges at the ends - España especially - and he introduced me to a couple of works I'd never heard, including the early (1874) Lamento, making a persuasive, atmospheric case as always. Ansermet's 1964 Joyeuse Marche is here; never mind the Paris picture show.


So for me it's the Poulenc thing all over again. And here, too, I want to read the letters, from what Roger Nichols in his typically piquant note quotes or intimates. How about this from Chabrier's observation of local women by the Spanish seaside:

On the beach, those señoras possessed of a well-developed bosom often have trouble remembering to do up their costumes securely. From now on I shall  carry buttons and thread with me. To be of service is my greatest desire. 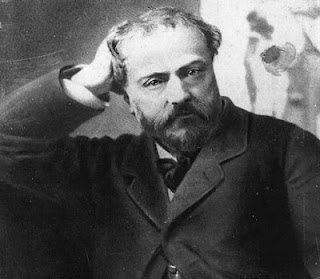 Well, it wasn't all sunshine and roses; the later years before Chabrier's death from syphilis, Nichols tells us, were unhappy ones. But never understimate the power of the greatest light music to spread joy. We need it for our good health as much as we need Wozzeck for an understanding of the human condition. Oh, and happy 100th birthday, Stravinsky's Rite of Spring. Done my bit on that already, though happy to hear it again this year.
Posted by David at 11:23

What wonderful portraits - I would like to talk to Berg before dinner and then have a super dinner with Chabrier.....with Mr Nice throughout of course

I saw Wozzeck in Munich and the soul of a downtrodden man under capitalism came through in a way I thought essential to the piece. And if I can add a rather frivolous note ( one is always doubtful about that after such erudition in the Blog) the night after I attended the stage caught fire and everyone had to leave. I had noticed however that also in that period the Gotterdammerung was being performed and I wondered how many would have perished had the fire hit the stage at the same time as Valhalla was being consumed......ah ! sehr realistisch !!!

Or maybe have the dinner with Chabrier and then talk into the small hours with Berg, Poulenc ideally being present throughout (since he was always open to more outwardly progressive music than his own).

In another twist on the Cracknell take, one could have Wozzeck set fire to the kitchen and be immolated within, though the music speaks not of fire but of water.

I can't resist that anecdote, probably made up, about Bruckner being alarmed by the magic fire music in Die Walkure because he thought they were setting light to Brunnhilde...

I love your juxtaposition of dark and light here. I heard Wozzeck at the Met, Levine conducting, a couple years ago. I'd not heard it and approached it with some trepidation, not sure how I'd fare with the atonality, but I needn't have worried, for, as you've noted elsewhere, Berg is different. I don't know Chabrier's work at all, but love your reminiscences, not to mention the proposed playlist. Speaking of The Rite, I've just come back from the Ballet Russes exhibit, and how astounding that was--I'm oh so sorry I had only the one chance at it, but at least I had that. Very happy, though, that I will get a second chance at the Adams/Denk concert (first night was behind the stage, tonight in the orchestra). Denk plays like a dream, doesn't he? Adams's City Noir was phenomenal to hear live, not least for the virtuosic solo sax from Timothy McAllister (for whom, I learned in an after talk, Adams is writing a concerto--that will be interesting, to say the least).

Sounds like you've been having an even grander time. I am so curious to know what was in that Ballets Russes show: I hope the Goncharova Firebird backcloth was again the centrepiece. And plenty of Rite costumes? Chout? Picasso and Derain? Oh, I wish we could bring the original V&A one back to life.

Denk is another of those rare artists who can bring anything to life. I'd love to hear his Ives Concord Sonata live. A saxophone concerto from Adams could be a stunner.

The Firebird back cloth was there, and how magnificent. No Derain that I recall, and I think I would. But yes to Chout, Rite costumes, and Picasso, oh the list goes on. At least, I console myself, I knew enough to splurge on the catalogue to serve as an aid to memory. (As an aside: I can't blame this one on auto check: Ballets with an "s" it should have been--as Russes with an "s" earlier. Going to the blackboard for penance soon . . . ) As for Denk, I'll be looking out for him, and for the Concord. I've not so far made any headway with Ives, but hearing Denk play it live would be another matter altogether.

Maybe the operas could be played together as in Ariadne.....? Imagine

Maybe there could be a new game - twin your inappropriates a la Ariadne. I'd suggest Wozzeck and Don Giovanni - enough class parallels there to make the misalliance interesting (and funny to think Buchner wrote Woyzeck not long after Mozart's death). I suppose the nearest I've come to it was irreverently to suggest that the boring bits of Proust (all the Albertine stuff) could be replaced with the much more entertaining Colette.