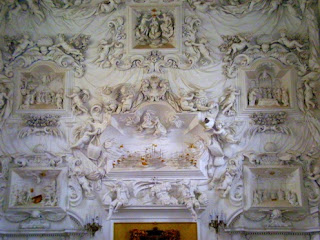 Giacomo Serpotta (1662-1732), stuccatoro eccellentissimo, is the pretext for my last and long overdue excursion into a Palermitan old-town quarter. I'm not even sure if two of the oratories on which he worked his stucco magic are even strictly within the bounds of La Vucciria, once celebrated for its market (less so now, I was told by our masterchef hostess Nicoletta Lanza Tomasi, who prefers to shop in the Capo and the Ballarò). A third, which tells a sorry tale, certainly isn't. The Oratory of San Lorenzo sits alongside the monuments-rich church of San Francesco near the Piazza Marina.

In that atmospheric quarter, the Antica Focacceria San Francesco faces the church in a little square. Sadly neither that nor its nearby gelateria were  open for business, but may have been so by the time Easter arrived, to judge from the preparations within. 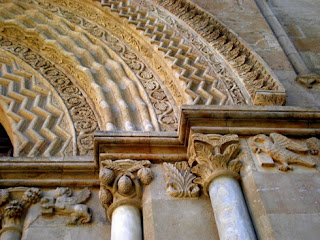 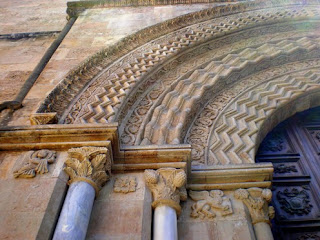 and has been mostly de-Baroqued within, 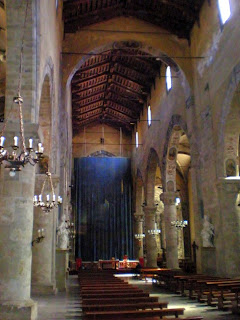 one chapel to the right of the presbytery excepted. 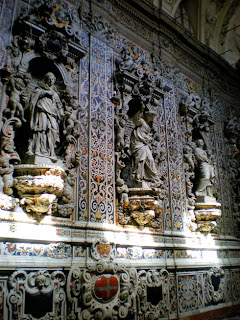 Among its side chapels is elaborate early Renaissance work - not so common in this city - by Francesco Laurana. I liked the air of modest piety, with plenty of Easter week worshippers at prayer. But the greater treasures, or what's left of them, are within the oratory next door, approached by an attractively planted courtyard. 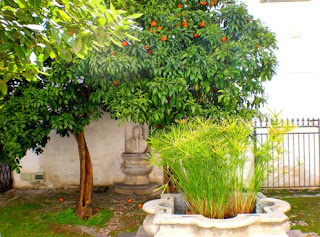 The only major Caravaggio in town, a Nativity with Saints Lawrence and Francis above the altar, was stolen in 1969 along with many of the figures in the fascinating little stucco theatres which seem to have been a speciality of Serpotta, his brother and his son. No doubt the painting sits in the house, or vault, of some Palermitan mafioso. 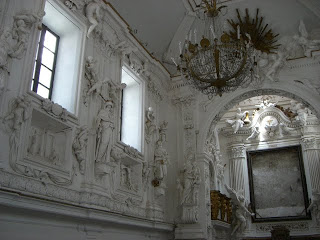 The restoration took place in 2003, funded like work on the other oratories by the baroque expert who loved his Serpotta, Anglo-American Donald Garstang. He did more than anyone to make sure that Palermo honoured its finest artist since the Normans. I'm reliant on a wiki-image for the interior shot, since this is the only oratory where photography isn't permitted, and the details that follow come from the only postcard on sale. 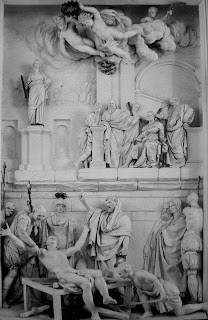 Fortunately the stucco masterpiece of the building, Serpotta's amazing depiction of St Lawrence on the gridiron, remains intact on the west wall, and repays close study. 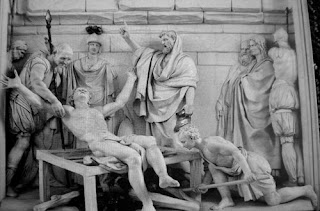 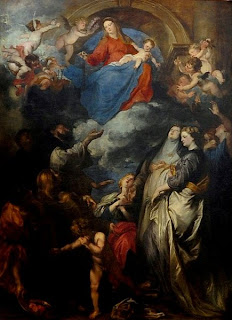 and is decked around, in Serpotta's work of 1710-17, with statues of the allegorical Virtues supposedly modelled on society ladies, like Justice with raised sword 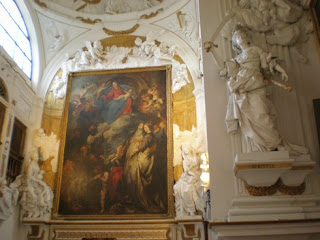 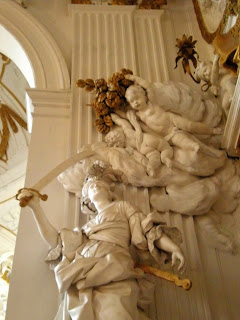 The Virtues are interspersed with the Mysteries of the Rosary (not being a good Catholic boy, I'm largely ignorant of those). Some of the paintings come close to the Van Dyck in quality. 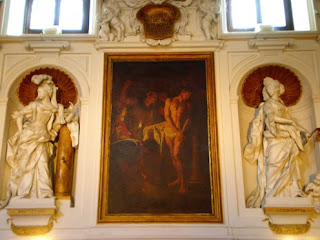 I'm not a great fan of rococo excess, but Serpotta's putti who assist the noble dames certainly have character. This one is bizarrely tonsured as a monk 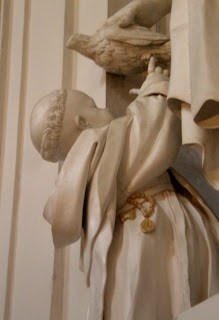 while another carries a lamb aloft to Purity 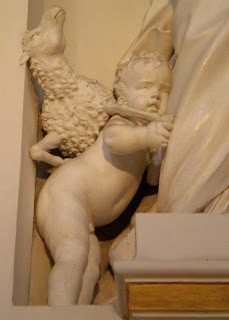 and in the presbytery another plays a bassoon. 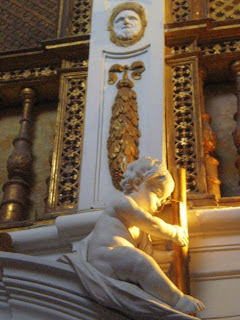 Nearby Santa Maria in Valverde was covered in the kind of baroque marbles we'd admired in the Church of the Immaculate Conception in the Capo, but as a service was being conducted for the small Romanian community, we carried on along the street to the Oratory of Santa Cita (Zita). The church, reached by a small connecting cloister with another specimen of the Brazilian Chorisia I'd admired in the botanical gardens, 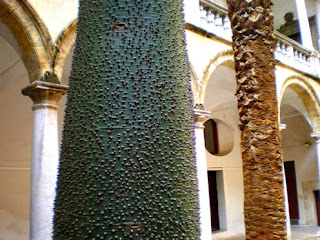 seems to have been as badly damaged in the Second World War as the neighbouring Palazzo Lampedusa, our friend Giuseppe Tomasi's pride and joy which he was forced to abandon for Via Butera 28. The piano nobile passageway still has some very beautiful floral Sicilian tiling 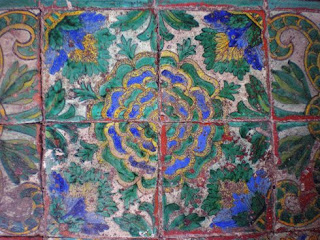 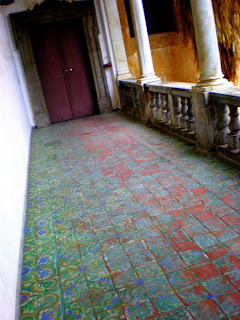 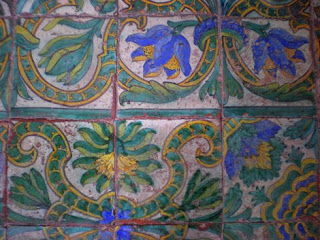 but the oratory's the thing, Serpotta's most imposing achievement, dating from 1685-90: the whole of the west wall is covered in theatres (see up top), at the centre of which is a depiction of the Battle of Lepanto. The Oratory was dedicated to the Virgin in the 16th century for her 'intervention' in said battle. 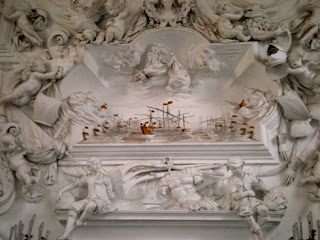 The theatre scenes around it here include the road to Calvary 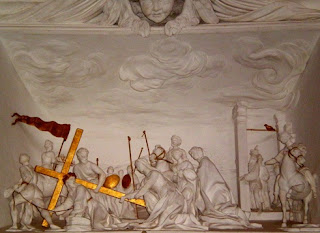 and a well-composed Flagellation 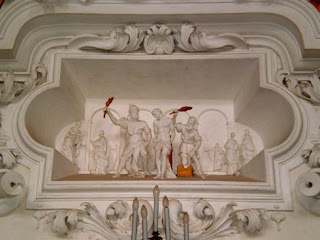 while the flanking figures are just as remarkable, including the boys below the battle scene 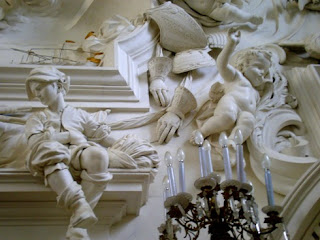 and a fine figure of a man. 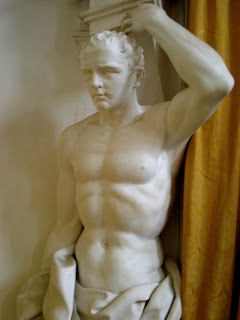 Again, the putti are remarkable, if you care for that sort of thing (J decidedly didn't, and I'd have preferred more of the above). These two struggle manfully, if that's the right word, with a lion in the presbytery.

The rain of our only squally day, that ultima colpa della coda dell'inverno, as the paper put it, which made travelling on to our agriturismo outside Castelbuono that afternoon somewhat fraught, was intensifying. So we took a quick walk around the scaffolded Palazzo Lampedusa, passed the Vincenzo Bellini Conservatory of Music, popped in to the well restored renaissance church of San Giorgio dei Genovesi to see a fine Giordano of the Madonna of the Rosary, and headed up to the main drag to buy provisions for our trip outside Palermo. Here, my debt to an unforgettable week isn't quite paid: Monreale, Cefalù and Castelbuono have yet to be honoured. Meanwhile, I continue to disturb myself post-Wozzeck with John Dickie's indignation-fuelled study of the Sicilian mafia, Cosa Nostra.
Posted by David at 17:02

I remember those wonderful works by Serpotta. I love the Putti who are often mocking the more serious tableau. I read last week the book on Lampedusa by David Gilmour, very interesting. A complicated figure belonging to another age.

Well, I don't know Rococo excess from my elbow, but I can say that I sort of have to love that putti playing bassoon! What I do know is that, for this sort of thing, particularly, I see better through your eyes than I would through my own. The theater scenes are extraordinary.

Speaking of extraordinary, I can see there's yet another reason I need to make sure and get tix to Der Rosenkavalier, based on your response to Wozzeck. And, still speaking of extraordinary, thank you many times over for noting the remarkable War Sonatas. Here's an instance, truly, where I wish I had technical knowledge sufficient not only to understand something of how they're constructed, but to better appreciate what makes them great. I can hear it, no question, but I want to know the what and why.

So, now, off I go again, and on to Washington for Adams/Denk and the Ballet Russell exhibit. Just hoping that I won't melt in the predicted heat wave.

Serpotta very much reminds me of Antonio Raggi in the way he sculpts.

Pete - Raggi's an interesting case, isn't he? Always overshadowed in Rome by his master Bernini, and some of his work is in churches which always seem to be closed, whereas Serpotta has the stage to himself in Palermo. I wonder who else did the little theatres, though?

Sue - what's the link between Rosenkav and Wozzeck? I can't think back... Prokofiev's sonatas go straight to the soul and the viscera. They're fairly conventionally constructed sonata-form-wise. The terrible depths of the slow movements are immediately grasped, I think.

Keep cool for Denk and Diaghilev. Has autopredict given you 'Russell' for 'Russe(s)'?

Laurent - Serpotta shines in Sicily, doesn't he? The only other one-off I can think of is Antonello da Messina, much earlier of course, and we'll get to him in Cefalu. Glad you read that biog. It must be frustrating how little of the outward life there is to go on - though with the publication of the 1920s letters, there's now a lot more.

"It is your great good fortune, Cavaliere, that you live when Maffeo Barberini is Pope. But it is our greater good fortune that it is during our Pontificate that the Cavaliere Bernini lives"

So said Urban VIII - who tempted fate by erecting a memorial in advince for his 21st anniversary as Pope, dying before the essential date

How I hate auto-check! Yes, Ballet Russes. The Wozzeck/Rosenkav connection is Ed Gardner, per your comment at the end of the previous post (unless of course I misunderstood the reference). Sorry for the short-hand. I'm now in transit, and the internet connection seems to be dodgy.

Ah right, I'd forgotten - yes, his Rosenkav was as swooningly lovely throughout as his Wozzeck was in places (believe it or not). Slow in the big moments but didn't hang about for the comic business.