That's a Danish happy birthday to the mighty and yet oh so human Nielsen, 150 today and, as befits a Gemini, a man of many faces (not just the two). Thanks to the Danish Royal Library via the Embassy for permission to reproduce the photographs here*.

Still ringing in my ears from the last concert in Sakari Oramo's Nielsen symphonies cycle with the BBC Symphony Orchestra, as topsy turvy as Gilbert and Sullivan as well as more profound, the variation finale of the Sixth Symphony strikes me as a quintessentially Geminian endgame. Every mood is here, and Nielsen still can't really decide on what should  have the last word (a burp, or fart, from the two bassoons isn't exactly conclusive). I'm more than ever convinced that this had a huge influence on Shostakovich - above all in the desultory waltz sequence of the Fourth Symphony's finale, not to mention a glock launching another first movement, that of Shostakovich's Fifteenth - also, surely not coincidentally, a symphonic last will and testament.

Anyway, I find myself immensely privileged to be here in Copenhagen on the day, keenly awaiting my first live acquaintance with Saul and David, the most important gap to fill in anniversary or for that matter any year. And last week it was Sibelius melodramas in a stunning programme put together by Leif Ove Andsnes at the Bergen Festival, an even more unrepeatable treat. Tomorrow, off to Funen for house-museums and a concert in Odense (the Vienna Philharmonic under Franz Welser-Möst, not the first name that springs to mind for the fire of the Inextinguishable - they turned their noses up at the Danes' proposal of the Espansiva, more fools they - alongside Sibelius's Four Lemminkäinen Legends). Then back to London on Thursday in time to talk to Vladimir Ashkenazy at 6pm before his all-Sibelius blockbuster with the Philharmonia on the Southbank. 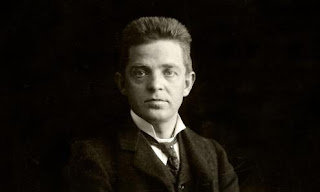 Projects here have an enviable level of funding. This website, along with the associated catalogue put together by the Royal Library complete with full scores to follow, is hugely impressive.  Every letter that Nielsen wrote, and much of what was written to him, has been published in nine volumes to date (one to go, I believe). There will be a two-volume selection in English, translated by my linguistically gifted colleague David Fanning. We know Nielsen was a remarkable writer, thanks to a translation by Reginald Spink - it reads extremely well - of his classic My Childhood (My Funen Childhood, to translate directly from the original title). It's shameful this translation isn't currently in print, but you can probably pick up a second-hand copy. Let me end by quoting from the introduction:

It has often surprised me how little we realise that the moment a child receives a strong impression, one strong enough to remain permanently in the memory, then that child is really a poet, with his own distinctive gift of receiving the impression and reproducing or merely retaining it. Poetic talent, I imagine, is fundamentally the faculty, the gift, of distinctive observation and perception. Thus we have all at one time been poets and artists, each after his manner. The rough way in which life and adults summon the child from its beautiful world of poetry and art to harsh, matter-of-fact reality must, I think, be blamed for the fact that most of us forfeit these talents, with the result that the divine gift of imagination, innate in the child, becomes mere day-dreaming, or is quite lost.

The great poets, philosophers, scientists and artists are only exceptions that prove the rule.

For Danish musicians, Nielsen's special genius is that he kept his childhood simplicity for the extraordinary number of popular songs known and sung by all his countryfolk - albeit unfamiliar outside Denmark - and yet had such radical, unrepeateable visions in his great symphonies, concertos and operas. There's also the question of darkness and depression versus manic energy, but that's a whole other issue for future discussion.

*I learnt only today here in Odense that the series of 'grimasses' were taken in the mid 1880s at a photographic studio far from Nielsen's usual haunts for the benefit of a girlfriend in front of whose family he acted out stories, doing all the voices and faces.
Posted by David at 15:48

Loved the Nielsen songs which I heard on CD Review last Saturday - certainly something to follow up.

You are oh so lucky with this sojourn--and you have certainly more than earned the right to it. We're thinking of Denmark for our next trip, so we'll be eager to hear more about your time there, including Funen, needless to say. I love that set of grimasses--can't remember exactly where I ran across them, but I think a book on Nielsen I obtained from the library; I seem to recall that story about them, somehow.

On the Ashkenazy/Sibelius, coincidentally, I watched the Philharmonia mini-doc yesterday and found A. so touching on his thoughts and feelings about Sibelius. As you might predict, I'd love to hear your talk--and the concert has a lot of lovely pieces in it, not the normal fare (except Sib 2).

PS: As you find more information on the Shos-Nielsen connection, do please pass it on. Most intriguing!

I'm not familiar with enough of the Nielsen songs, Catriona, and the funny thing is that every Dane has known the traditional ones from childhood. So their picture of the composer is as a sunny patriot, whereas we who got to know him through the symphonic masterpieces have always been aware of the dark side. Denmark has been coming to terms with that over the past six months, it seems.

Students told me Saul and David had been broadcast from the Royal Danish Opera here on Radio 3, and people loved it. I did too, and I'd say from last night's performance that it might be the last truly great opera I hadn't seen stage (Szymanowski's King Roger just isn't in the same league, despite fleeting amazements; this is authentic Nielsen through and through). There remain Hindemith's Cardillac (and of course, one hopes, the next Adams...) Though Pountney's production didn't convince me it needed staging. More on that anon.

Sue - we just heard they're planning a full Ring cycle here in Odense for the opening of the new opera house complex in 2017, so maybe that would be the time to spend a week here. I loved Copenhagen even more than before - the most relaxedly civilized city in the world? I could easily live there.

Thanks for the pointer on the Ashkenazy/Sibelius minidoc. I should watch it before I head off to interview VA tomorrow afternoon.

Thank you for that post and the quote from the book My Childhood. This is exactly what I was looking for when I try to explain how children react to art. This is also what I am trying to achieve, to create an impression or a strong impression in them, so that the message I am trying to convey about painting or sculpture stays with them. It is so difficult with electronic distractions all around and the lack of focus that follows. May I use this quote in a post on my blog?

Of course, Laurent, isn't it beautifully put? We were talking only yesterday, looking at the excellent Nielsen and Hans Christian Andersen museums here in Odense, how some museums overload with interactive stuff so the kids are fixated on screens and not looking at the artwork or thing of interest to hand.

Have the audiences gotten any better for the BBC SO at the Barbican as the Nielsen cycle has progressed? Or Oramo's tenure, for that matter; given all the good buzz, one hopes that more people are going to hear the BBC SO and Oramo live. Have they formally extended his contract? I can't imagine that they wouldn't.

I did hear this last concert on iPlayer, where it was perhaps slightly droll that the Foulds struck me as the "weakest link" on the concert, in that it was pleasant, but diffuse. Likewise, I couldn't help re-thinking that if only Rachmaninov didn't write a slow movement for PC # 4 that sounds like 'Three Blind Mice' stuck in 1st gear, it might be more popular.

BTW, somewhat off-topic; your thoughts on the appointment of David Pickard as head honcho of the Proms?

Yes, Geo., I think the raves for the Busoni Piano Concerto/Nielsen Four Temperaments concert marked a turning point, and the remaining four were very full from what I could see. Oramo's BBCSO Nielsen has made Rattle's Berlin Sibelius seem like very patchy work by comparison. And Welser-Most's Vienna 'Inextinguishable', a a collectable oddity which I caught in Odense (see TAD roundup of the Denmark experience).

Funny, isn't it, the Foulds managed to seem diffuse even in a short space of time. Good start and good solemn chords but as I wrote, it got a bit triffid-like in the middle. Sue Scheid has written about the shorter Foulds pieces, I note, but I must warn her off the horror of A World Requiem.

Rach doesn't know what to do with that slow movement, does he? Sticks on a bit of discarded Etude Tableau to try and round it off, but it's frozen. The rest is miraculous in its indecision and the finale is my favourite of the four concertos (and equal to the Pag Rhapsody).

David Pickard is such a nice and decent man from what I know of him re associations at Glyndebourne, which he's guided with a steady hand and changed for the better (he makes a personal effort to respond to emails, which is rare). I hope he won't be bent out of shape by rumours of bigger powers threatening playsafeing in Proms to come