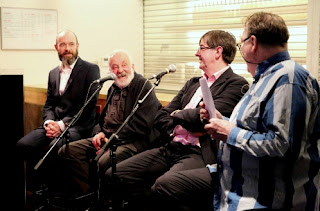 I hoped, but hardly dared to believe, that one of my great heroes would show up for a pre-performance talk in which I was participating at English National Opera. Mike Leigh's film work has been carved into the consciousness of (most of) my generation, at least in the UK. It even seems from what my goddaughter Rosie May told me that a whole new fanbase is popping up among students for the evergreen Abigail's Party many years after Alison Steadman's Bev first tottered around serving up 1970s party snacks and asking a male guest flirtatiously 'Do you like Demis [Roussos]?': Rosie had heard of a production in which the cast drank in 'real time' so they really were pissed as the show wore on, and she'd seen it onstage elsewhere.

Since then, as well as having a good laugh, I've been touched at various levels by Nuts in May, High Hopes, Naked, Life is Sweet, Secrets & Lies, Vera Drake - and the surprise hit of Leigh's biopic on Gilbert and Sullivan at the time of staging The Mikado, Topsy-Turvy. The stage work less so. I thought Mr Turner was a total masterpiece - DVD review here - and I'd put it up there with Des hommes et des dieux (about the French monks in Algeria kidnapped and murdered by terrorists) and La grande bellezza, Paolo Sorrentino's ambiguous hymn to Rome as one of the three films I've seen over the past five years to have had the greatest impact.All three I imagine I could see again and again. 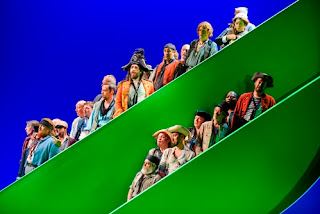 News that ENO had hooked Leigh to direct The Pirates of Penzance (production photos here by Tristram Kenton; talk snaps by Charlotte van Berckel from ENO's technical department) made me nervous. Would it work? It did, and I felt relieved to be able to praise it very genuinely on The Arts Desk, though maybe you have to be in sympathy with the razor-sharp G&S idiom and how that might most sympathetically be served to 'get' it. Like it or not - I loved it and laughed very loud very often - there was no doubt that time and effort had been put into every move, every grouping. Much surer-footed throughout, in short, than Terry Gilliam's Berlioz, though that had flashes of genius. 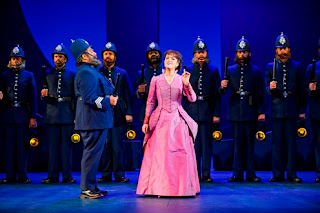 The work that had gone into a very polished show with a superlative cast (above, the wondrous Claudia Boyle as Mabel with Jonathan Lemalu as the Chief of Police and his deadpan men) became the more apparent following Mike's arrival the other Wednesday, five minutes before we were due to start, for the talk (by the way, the likely choice had been staff director Elaine Tyler-Hall, which would have meant a necessary woman in the group. But you can't sniff at the company that did materialise).

Christopher Cook, the absolute doyen of animateurs in my opinion and pictured on the right in the top shot, had mapped out a format familiar to these well-planned 45-minute events, which he always steers to perfection: he'd ask me questions for 10 or so minutes about the background and the music, then turn to Mike about the show, then the cover Major-General, Adrian Powter (top shot left), accompanied by vital repetiteur Chris Hopkins, would sing the patter song (Andrew Shore as Stanley Mark One with Joshua Bloom's equally impressive Pirate King pictured here), 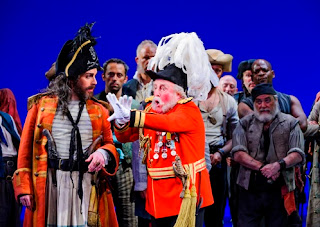 and finally there'd be a general discussion and questions. But Mike took control, not at all in an unpleasant way, the minute he arrived, and decided it would be interactive from the start. It was impressive if slightly scary to see his stage management, but reassuring to see how he gave everyone credit (nice nod to the pianist, for example, and no sense of exclusive ego, though you've got to have one well adjusted to the world to do what he does). 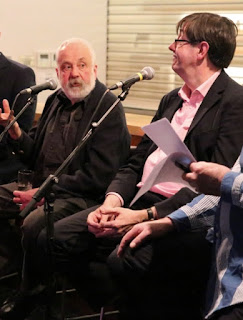 So we batted the ball to and fro, I loved every minute, and you can hear the results on this podcast.

After the official business was over, we carried on chatting enthusiastically about G&S shows we'd seen going back some way, what we'd liked and what we hadn't (you'll hear on the podcast how it was a Finborough Theatre production of The Grand Duke which made that ML's first choice for ENO - but he couldn't get the collaborators he wanted to be equally enthusiastic). Needless to say, I'm going back to the ENO Pirates before the end of the run.

And while it's All About Me, and Great British Opera/operetta, here's the film Garsington finally released of the Death in Venice insight evening with Steuart Bedford and Andrew Mackenzie-Wicks. The Gondoliers it ain't, though I love Britten and G&S equally. You could say that the Savoy operas are tied to my childhood, Britten to my very slow coming out starting in my late teens.

I had no idea you were a G&S enthusiast, let alone an "unabashed" one! Leigh is a favorite in our house, as are you, so what fun to read this, see your photographs, and listen to the podcast, too.

'Unabashed' is a word used only by those who think there might be anything to be 'abashed' about with G&S - I presume Chris Cook used the word? As ML said, so many of us performed the Savy operas in our youth, which has left us either loving or hating them. CC thinks he's coming back round...

Glad Mike Leigh's very English satire goes down well - but then you're half honorary Brits anyway.

ICC, yes (and I know what you mean, though I sort of enjoyed the thought of you being referred to as "unabashed," along with, BTW, "Will you please welcome David Nice and Mike Leigh." One for the record books, that.) As for G&S coming back around, the pre-concert commentary offered many excellent insights for understanding what goes into G&S works. I have only a very little, and long ago, exposure to G&S, which I only dimly remember. While I enjoyed what I heard and saw, I didn't appreciate G&S musically on the level you all discussed in the talk--which is what makes a good pre-concert talk so valuable. Should any G&S, and particularly Pirates of Penzance, come my way now (and I'll keep my ear out), I will be listening in a wholly different way.

They have to be 'done' at the very highest level. With the proviso that it's a shame to miss the dialogue, Mackerras's series on Telarc - sadly abandoned halfway through - spotlights the musical excellence. His Pirates is terrific - namedropping again, I was chatting with tenor John Mark Ainsley at our friend the Rev Andrew's Neasden farewell barbecue on Sunday, and was able to tell him how stunningly he delivers Frederic's 'On, is there not one maiden breast?' When it's done that well you get the top operatic quality of the music AND the delicious subversion of the lyrics. And the orchestration is so good - even though I enjoyed quite as much in their ways the piano-only pocket versions of Charles Court Opera and Sasha Regan's all-male company. Mike has a point when he says 'no camp' - it's much funnier and stronger delivered straight, or at least straight-facedly.