Just do it. Vote. 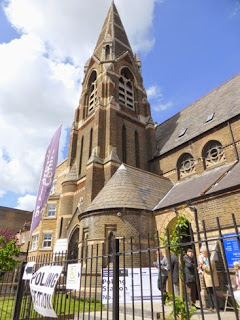 Plenty of queueing early this morning inside our polling station - and my centre for teaching concert-related classes - St Andrew's Fulham Fields. Following on from the agitprop, you-know-it-makes-sense footnote to the Georgia Brown post below, I fondly imagine the majority of local people will want Charing Cross Hospital saved, and now that Andy Slaughter's website has confirmed Labour's promise to stop its demolition going ahead - at least while a fuller report is conducted - the NHS manifesto with which he's now leading is the only one which adds up (not that I've seen anything of our Green or Lib Dem candidates). Clever of him to provide alternative voting cards which reached us yesterday afternoon - though I still used the straight version because I wanted to keep this one. 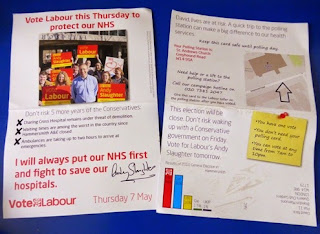 So is it really as simple as I see it, that voting Conservative or Labour is a choice between self-interest and a wider sense of community? 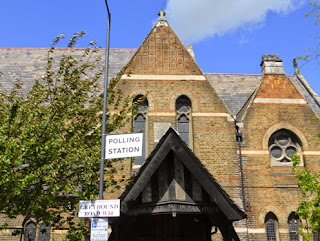 Actually I still say vote, no matter what your convictions - unless you're still blockhead enough not to see Ukip for what it is. I was at least a tiny bit pleased to see that a neighbour whom I rather like but who used to work for that party was sporting a blue rosette outside the church. 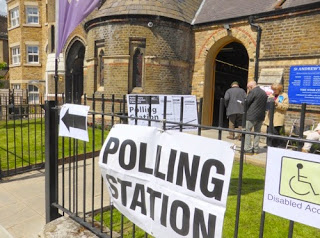 While I don't know what to believe about plans for a Tory coup in the confusion that is fairly certain to follow the results, I cry shame on the dirty war of the right wing press - I felt unclean holding my free copy of the London Evening Standard when I saw it was telling me how to vote, which of course it would as the plaything of a Russian oligarch's son - and all the panicmongering about Labour's possible pact with the SNP; shame on Miliband for ruling out any possibility, too. These have been unhappy elements in a generally low-key and not very inspiring campaign which just happens to be vital on the major issues (though the bigger ones about Europe and the wider world have not been raised).

Anyway, it's a lovely day after high winds and rain, so that should get the voters out. And was it a sign and a symbol that the flower most flourishing in the sensitive new replanting of the beds around the church was the bright red Papaver commosum?* 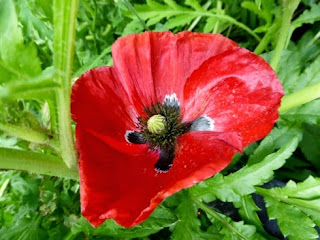 Most wished-for moment of the results as they come in tonight/tomorrow morning, apart from the unlikelihood of a cleaer win: being able to roll around on the floor with insane delight when Farage loses his bid for South Thanet. Please God.

*Correction made thanks to that omniscient horticulturalist Deborah van der Beek in her comment to the post above this one.
Posted by David at 14:05

Keeping our fingers crossed here for positive results. I think your question, "So is it really as simple as I see it, that voting Conservative or Labour is a choice between self-interest and a wider sense of community?," is beautifully stated, and I've no doubt but that it really is that simple.

It takes true Democrats to be first past the post here: and of course you may well see larks before we do, as I shan't be awake for the Thanet nailbiter...

I'm sure our staunch Labourite Debbie won't mind my quoting her from Berlin: 'I am a bag of nerves waiting for the election results from the UK. It really looks even more like a banana republic viewed from afar. What a useless electoral system and what a wicked right wing establishment and its press. Fingers crossed very tight!!!!' She and her Deutscher Mann Derek will 'awake all night watching telly and eating crisps. Might even have the whisky on standby'. Oh, don't ask why...

As I write this comment it appears the Tories have won. I do not know if this is the desired result. Cameron is a good friend of Herr Harper in Canada and many want to see Harper gone in October.

At least you have the consolation of your chosen MP getting returned... …

PS - liked the Mahagonny reference in your response to Susan.

Desired result by whom, Laurent? Obviously, from the above, not by me. We are all - winners included - in shock. And I had to be elsewhere when Farage finally got the chop, one small mercy.

The other is that Our Andy, as CS points out, did indeed get returned, increasing his majority by over 3000 votes on last time and taking 50 per cent of the votes. Who ARE those 2000 people in Hammersmith and Fulham who voted Ukip, though?

There remains the intriguing case of Nicola Sturgeon. Is she really Devil Woman, as the right wing press and a friend of mine in the Borders who amazed us by canvassing for the Tories seem to think, or is what you see what you get? I'm still inclined to applaud the Scottish experiment, but what do I really know?

Well the results are in now. I am surprised by this victory and one has to wonder what people are thinking and why they voted the way they did. But then again I am not fully aware of the issues in UK. As for Scotland well the Scots have claims so this is the wild card and will have to see what Cameron gives them. At any rate you have a better democracy in the UK than here in Canada where this morning with the passing of bill C-51 we are now an Official Police State. We shall see what happens in our own election in October.

Yes, the Conservatives are not Ukip after all, but there's been some very serious dismantling of essential services and punishing/demonising of the less well off, as well as 'Devil Woman' Sturgeon. At least up there they're fighting for a proper change, which we wouldn't have got here even with Labour. I wouldn't mind going back to live there but of course London remains the cultural capital of the planet so not yet, at least.

Re Nicola Sturgeon: she's got style - and then she's got a style. When Kezia Dugdale, the Labour leader in the Scottish Parliament, asks her questions at First Minister's Questions every week, NS stands, in a rather passive aggressive way, with an expression of incredulity, and then the first words of her response are usually some variation on 'What a ramble' or 'I have no idea what Kezia is talking about' and then generally disses her.

People like her because 'she gets things done' but then, again, so did Hitler and Mussolini (cheap shot, I know) - and Thatcher. It is now being said up here, by some commentators, that, for all she says she joined the SNP because she hated Thatcher, she is in the model of...

It's so, so depressing. How can anyone who has ever borrowed a library book, attended a state school, used public transport, seen a doctor or needed hospital treatment vote Conservative?

CS, I like what I see. But admittedly I haven't seen that much.

Indeed, Graham, and as depressingly simple as you put it. Why do we lack the bigger picture in this country? I mean, even the campaign on all sides was fought on exclusively parochial (if important)issues.

Well, it's all terribly dismaying, though I am glad to know that at least your Slaughter won. It's hard to fathom from this distance how this all came to pass. I do see some analogs with what goes on over here, and one thing that I've been thinking, per our earliest exchange, is that, at least over here, it seems all too common that people actually vote against their self-interest, often provoked into it by fear-mongering of the most pernicious sort. As Graham R put it so succinctly with "How can anyone who has ever borrowed a library book, attended a state school, used public transport, seen a doctor or needed hospital treatment vote Conservative?" And your bigger question is one I often ask myself, too, about what happens this side of the pond: "Why do we lack the bigger picture in this country?" Precious little thinking goes on, and far too much reacting.

On a lighter note: I should have got THAT Mahagonny reference from my one excursion into musical theater in college, playing an aging opera star in a loopy take-off of Mahagonny to "rave reviews."

It's interesting, Sue, only a decade ago we were all asking why (some) Americans live in a state of fear about the world. I didn't think fear was a British quality, but both the Tories and Labour tapped into it in trying to scare people about the SNP. The Murdoch press, as usual, is most to blame.

Which character would the 'ageing opera star' have been - Jenny or the Widow Begbick? Or was it a spoof with completely different characters?

David: Would that I remembered, if indeed I ever knew. It's possible the musical was a spoof of more than one Weill/Brecht collaboration.

It seems that here in Canada fear is a commodity the Conservatives of PM Harper love. Scaring Canadians appears to be the way to go. Harper is a good friend of Netanyahu, Cameron, Berlusconi. We hope for change here also, but the public is very apathetic.

I hold on to what is perhaps an illusion that Cameron is nowhere near as bad as the company you mention - but unfortunately some of his back benchers would be quite at home with Netanyahu* (it is still very hard to imagine anyone in this country openly saying 'the blacks/Jews/gays are rushing to the polls, watch out' in the way that Netanyahu outrageously did about Arab Israelis. Anyone saying such a thing here would have to resign immediately). I hate the sound of Harper from all you've told me.

*and let's not forget it was Blair who took a holiday at Berlusconi's invitation, if I remember right.

The fault in the SNP is not that they push for Scotland ( though that was got them the votes) but that they have the old fashioned socialistic ideas - spend on nice things and let the economy catch up. Hence crises, as has been proved so often since the war. Like the courtiers of the Bourbons they have learnt nothing and forgotten nothing. With New Labour we hoped that the lessons had been learned but the bias against good sense has proved too strong in Labour also. The economy is the sine qua non, although of course social aims are the raison d'etre - when we can afford them

Very simple: we can afford them by making the rich pay more. And that isn't going to happen now.

As for not overstepping the mark in the idea of infinitely expandable growth, I fear New New Labour - who, as Polly Toynbee pointed out, aren't 'for' Blair when he started but for Blairism when he went wrong - won't stop it. Hello Third Runway.