Georgia Brown, we love you 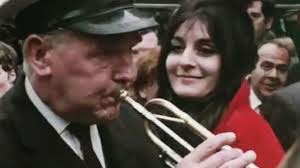 Caught an amazing archived documentary the other night. 'Who are the Cockneys now?' in the BBC's One Pair of Eyes series was not the most representative choice of titles, perhaps; this 1968 treasure follows fabulous voice of the 1960s and '70s Georgia Brown back to the East End where she grew up in a Jewish community that welcomed all others and worked together to do what they could during the war years. That grounding made her sad and angry that there wasn't much connection between the locals and the latest wave of immigrants when she went back, coinciding with the dockers' anti-immigration protests and Enoch Powell's 'rivers of blood' speech. She'd make a good Labour candidate if she were around today, on which more anon (sadly she died far too young at the age of 58, of complications following an operation, in 1992). 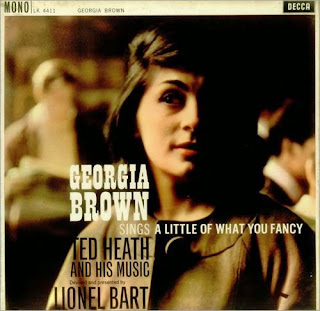 There was inevitable comparison between then and now, and a lovely sequence in which Georgia told us of how she started to question her religion at a synagogue Day of Atonement, but most of her concerns were with the present. She went to a Jewish youth club that staged spirited shows and met to remember the Holocaust once a year, and asked how many outsiders had joined. Only one or two - and while a couple of the young people she interviewed were in favour of assimilation, at least as many others weren't. She found a young harridan turning her mouth down at 'the Pakis'. And she talked to Bangladeshis before they were so named who got by but didn't really feel comfortable. I suppose they do so more now, but of course we have fresh tensions.

So not that much has changed, except of course in the poshing-up of Shoreditch and Spitalfields streets which looked amazingly decrepit and broken down in 1968. A block in which Cypriot immigrants lived, and Georgia's grandparents before them, didn't look fit for habitation. Far from incidentally, over a hundred residents in the tenement where she lived as a child lost their lives in a V2 bombing, many of them schoolmates - imagine the horror of living through that. 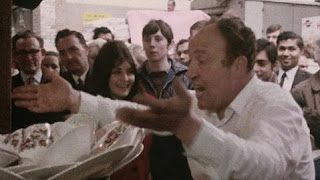 A lot of what Brown and another eloquent speaker, Wolf Mankowitz, had to say would be commonplace among liberals today, which is why she seemed so much of the moment, but took more guts back then. And of course there was humour in the fleeting appearances of former schoolfellow Lionel Bart, who drove her eastwards in his limousine. When she auditioned for Oliver! (I have the recording of the original London cast), he shouted in delight 'Lily Klot!' and she responded with 'Lionel Begleiter!'. I've ordered up a CD of our chanteuse in Kurt Weill, oddly twinned with Ethel Merman performing songs from Annie Get Your Gun. 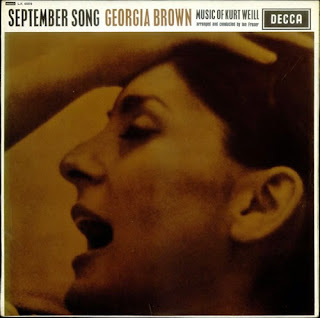 In the meantime, surprise, surprise, the whole documentary turns up on YouTube. Watch it all, and wonder at the spirit.


The good work goes on in Hammersmith and Fulham. Here we truly do have a Labour MP, Andy Slaughter, who's lived in the borough all his life, who cares about the big local issues and puts out a superb newsletter every week - his website is here -  including photographs of him at every conceivable gathering.

I fancy that even if you weren't Labour inclined and you wanted someone who did everything to serve your local area, you'd vote for Andy. In contrast to the feeble manifestos of other parties which have dropped through our letterbox, the back of his spells it all out:

The choice in May could not be clearer. A Conservative Party that demolishes hospitals and affordable homes or a Labour MP and government that will stand up for everyone in Hammersmith whatever their background or income 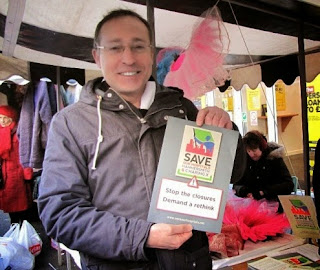 Andy's been in the vanguard of leading the protests against the closure of the A&E department at Charing Cross Hospital, which for those of you who don't know is actually just down the road and saved J's life when he started haemorrhaging from a tonsillectomy. He's fighting to stop Shepherd's Bush Market being obliterated by development 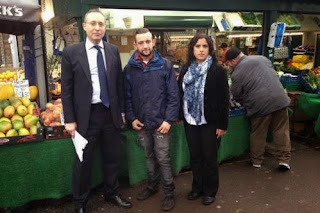 and is dead against the proposed third runway at Heathrow. 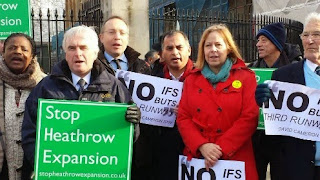 So although I've had my problems with the Labour leadership at times, I have no doubt about who's best for Hammersmith and Fulham. See some of you at St Andrew's round the corner on polling day.
Posted by David at 12:04

What a find. Thanks for the recommendation – really good.

Isn't she vivacious and real? I love it that the look is so late Sixties chick, but what she's saying and the way she says it could be now. The eyes certainly have it.

The Georgia Brown video, about whom I had to turn to the Edu-Mate for ID, has been saved for a rainy day, with thanks. I am so glad to know that there remain abroad in the world people like Andy Slaughter. We could use quite a few more of that ilk on both sides of the pond!

I wonder what East End (based) Josie knows about Georgia, too. There's the immortal fact that she created the role of Nancy in Oliver! - Simon (above) directed me to goosebump-inducing YouTube clip of her singing 'As long as he needs me' in a TV studio. Still, there's not enough else about her out there - this is one of the great grab-em-by-the-throat voices, and she's versatile, too.

Just got another newsletter update from Our Andy saying that Labour will decisively stop the threatened closure of our local A&E, which is always hugely stressed by the same thing happening to Hammersmith Hospital up the road. That ought to be enough to persuade anyone in the area that he stands for good v evasion (Jeremy Hunt's lies during the enquiry) and self-interest. But people aren't that altruistic, sadly.

It seems certain, though, that whatever happens tomorrow night and into the small hours, we'll be able to celebrate in our own back yard.