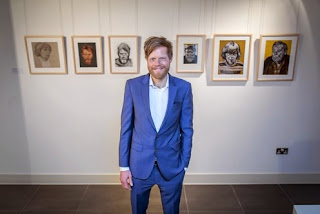 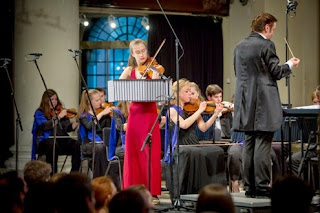 Here are two reasons to be cheerful and proud about Europe in the week following the shock of the Conservatives' election win. On 8 May, actually just before Europe Day, the annual concert in St John's Smith Square with members of the European Union Youth Orchestra and singers from the Liverpool-based European Opera Centre celebrated Latvia's first Presidency of the Council of the European Union. It's also 25 years to the month since Latvia regained its independence from the Soviet Union/Russia.Violinist Kristīne Balanas, featured in the second photo above, was only four days old when that happened, but what a magnificent symbol she is of the musical values which are still so strong - stronger than ever, if possible - in that Baltic country. All images of St John's and the 12 Star Gallery in Europe House over the way by the excellent Jamie Smith. 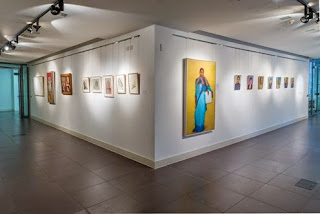 Four days after the concert, one of the very best exhibitions ever to have graced the 12 Star Gallery opened in style. I think you can see that German artist Thomas Ganter is a delightful chap from the top shot above and the one below; everyone tells me so, and I have the pleasure of finding out for myself next week. He told J he had worked for a year on the portraits for UNKNOWNS, the show co-hosted by the European Commission Representation in the UK and the Embassy of the Federal Republic of Germany, thrilled at the prospect of what the venue stood for. 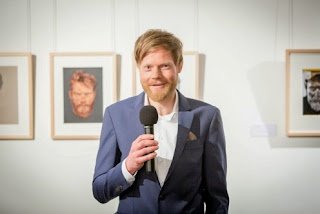 And the true Mensch he is can be summed up in two large-scale portraits which satisfy hugely on the aesthetic, moral and social levels. Man with a Plaid Blanket, a portrait of a homeless windscreen cleaner for which Ganter won the 25th annual BP Portrait Award, isn't in the show; it's currently in Wales and belongs to the Historisches Museum Frankfurt.

I long to see it in the flesh, as it were, because reproduction can only give a small idea of the scale and the finish, and the way the subjects in the pictures I saw come out of the canvas. I did see and wonder at the large (off-)centrepiece in the 12 Star Gallery, The Unknown Health Worker commissioned by the Bill & Melinda Gates Foundation and contributed to The Art of Saving a Life. I presume Ganter wrote the text accompanying its reproduction in the booklet:

This painting represents those women and men in every country who do their best to reach families and offer life-saving services including immunization. The portrait is inspired by a photograph of a health worker in eastern Nepal, who was in the midst of climbing up and down steep hillsides in the Himalayas to reach all children with measles, rubella and polio vaccines. She carries the vaccines in the cold box slung on her shoulder. It can be considered a 'monument' for the unknown health worker, to appreciate their hard work and their importance for all of us. 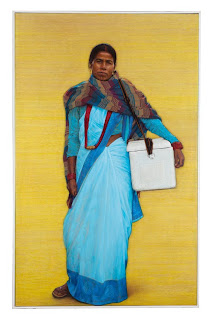 I wonder how and where she is now.

On the same wall are seven smaller portraits of citizens Ganter invited in off the street to sit for him: a street worker, a nanny, a lumberjack, a gipsy, a twin, a chemist and a clown. 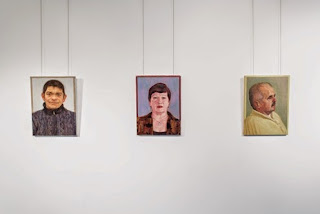 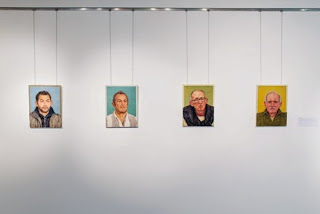 Another wall has family portraits, including Ganter himself in uncharacteristically fierce, Viking mode (see further up), while round the corner is an ink jet printed collection of heads from Ganter's sketchbooks, 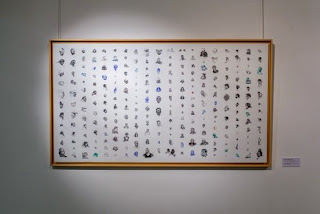 a rather different work, Still Life with Fur, and the head and limbs of a man wearing a silver bracelet. 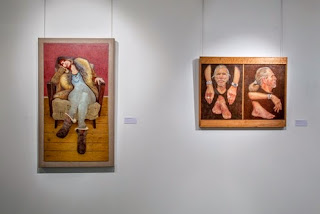 I couldn't attend the opening - I went to see the pictures last Friday, and will go again tomorrow, which is, alas, the last day - but I know those people below. That's the great Andrew Logan of Alternative Miss World fame, down for the 12 Star's 10th anniversary exhibition, and our Sophie Sarin back from Mali and shivering as I write in a basement prison cell for the sake of exhibiting her MaliMali fabrics at the House of Reform, part of Clerkenwell Design Week (more below). Sophie, incidentally, was the very first artist to exhibit at the gallery when the EU Representation lived in Storey's Gate. 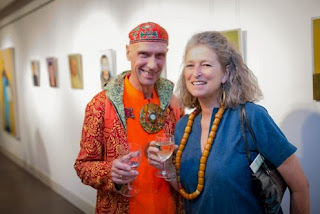 This man is familiar, too: Vasily Petrenko in St John's Footstall after the 8 May concert, with three admiring graces. I guess he was partly there because of the Liverpool connection, but he also, of course, conducted the EUYO in one of the best concerts I've ever heard, at last year's Proms. 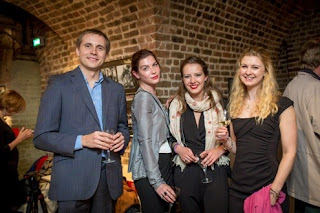 The concert got off to a spirited start with Suzy Digby conducting choristers of the London Youth Chamber Choir up in the right gallery in Artūrs Maskats' Midsummer Song for voices and percussion. 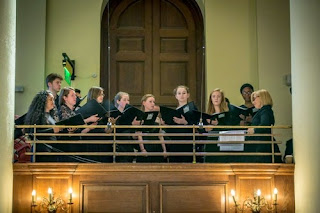 Could have done with more of them, but that was delicious. Balanas made a fine impression with fellow Latvian Ainārs Rubiķis conducting in Sibelius's light Op. 117 Suite for violin and string orchestra, but suggested incipient perfection duetting with soulful accordionist Māris Rozenfelds in Maskats' Midnight in Riga: such tone, such intonation! And it was fun to see them finally visibly warming, even smiling, to each other. Piazolla's swooning Oblivion rounded off that gem-like sequence. Shame there's not a shot of the two Latvians together, but here's Rozenfelds. 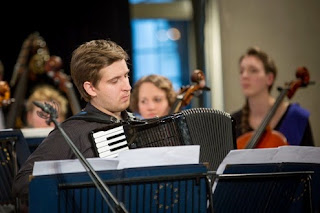 The young opera singers gave us the first scene of Sibelius's The Maiden in the Tower - wish we could have had it all - and a sequence from Rossini's Eduardo e Cristina, woven into the programme on the slender context that Sweden is its setting and Baltic countries were the theme. The pastiche opera with music from Ermione seemed more remarkable, on this evidence, for its cor anglais solo than for the vocal writing, but in the first aria the poised Héloïse Mas showed surprising contralto tones, very useful in Rossini. 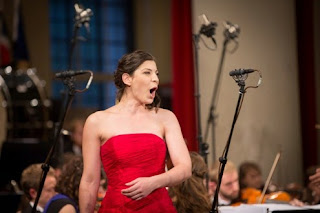 I dare say that last year's Greek programme made for a more enthralling unity, but only because it was the best of a series at the very highest level. And of course we stood on both occasions, with some pride, for the 'Ode to Joy' theme from Beethoven's Ninth Symphony.

Addendum: I seem to have given poor Sue a turn to think that our Sophie might have been locked up. She's been reassured below, but I might as well add a photo with the observation that while walls make a prison - the original use of the House of Reform in which Clerkenwell's Platform is housed - decoration makes a temporary home, despite the damp. Goddaughter Rosie May and I dropped in yesterday afternoon on our way to the ENO Carmen and I took pics, ostensibly for La Sarina's Facebook and Twitter pages, but I can't see those, so here's one of the better results of an ad hoc photoshoot commandeered by MaliMali's originator,  surrounded by her fabrics and with a super photo behind her of Dembele by the Bani river. 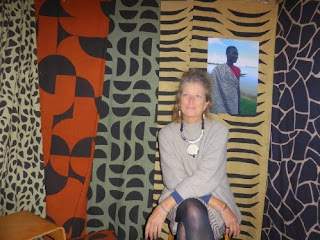 Worth repeating: all 12 Star Gallery and St John's Smith Square images by Jamie Smith.
Posted by David at 15:39

David:Oh, I love that you posted this on the heels of my comment on the previous post--an absolutely spot-on, sterling example of the importance of cultural exchange. Bravo to the Diplo-Mate and all involved! Aagh, though re Sophie, I kept going back to see if I was reading correctly what you wrote. If I am, sending all good thoughts that she is released tout suite.

Picture my amusement, mixed with slight concern, at you thinking Sophie was in a real prison. No, she's booked a stand - for which read cell - at the Clerkenwell Design Week. There are some marvellous light shows and, of course, MaliMali, tying to make the former detention centre currently called Platform arty. Unfortunately its humidity is so bad that water runs down the walls. I hope she hasn't got sick after her third and last day. More on this anon.

David: I took the bait, didn't I? Actually, I just discovered that it was a shop in a very odd place, and came over to write you! And yes, may Sophie stay well despite those damp conditions. I am sure you will both have fine stories to tell!

No intention to trap the unwary - anyway, I thought I'd better add a picture above of how cosy and very Malian Sophie made her cell.

Thank goodness, David and Susan, that I am not a Victorian prisoner and that my brief spell in the House of Detention has now come to a happy conclusion. It was three days I do not wish to repeat! Thank God that we have progressed since those days in our treatment of prisoners. It is now May but it was so cold and damp that I shiver to think what it would ha1ve been like in February! Let's hope that these days of showing MaliMali's textiles will bring us some business....

Well, dahling, you'd certainly make a glamorous prisoner in an orange boiler suit. Maybe a special guest appearance on Orange is the New Black? And now I believe I'm shortly to be the recipient of Sarin cuisine - Swedish meatballs, I hope.

Sophie: Hooray! So glad you have been released, and knocking wood that the experience nets great results for MaliMali!

The portrait paintings are very nice, I do like them a lot. Nice to see Sophie also and her MaliMali fabrics. I still remember that evening a few years ago at Europe House with J. and the reading of the Greek Play, such a nice evening indeed.

Sue, I fancy Sophie is a bit low over the fact that the Clerkenwell experience has so far yielded nothing. But she cheered up last night, having asked me to take her to a quartet concert and got - only connect with Laurent - Canadian violinist James Ehnes in a phenomenal partnership with American pianist Andrew Armstrong at the Wigmore Hall.

So, Laurent, Herr Ganter has packed up and gone back to Germany, to be superseded in the 12 Star Gallery by an Albanian exhibition which sounds rather fascinating. Glad you like the pictures. Having been back to see them a second time, I realise more than ever that reproduction doesn't really capture their singularity, details and finish.

Albanian exhibit, did you know I visited that country 12 times in 4 years. A record I am sure.

I believe that this portrait was on exhibition at the National Portrait Gallery a year or two ago. I remember the contrast between the gold background and the huddled figure , a play on royal depictions with gold leaf backgrounds. A fine and thoughtful piece.

Laurent - was that during the dark post-Hoxha times? I read a travel book about the era, The Accursed Mountains, which put me off ever going. But times have changes in some parts of Albania, I understand. Our Viennese friends Tommi and Martha nearly died when they got lost walking in the mountains, and only found the right way after two days by chance. They bravely went back to see where the alternative turning would have led them - and yes, that would have been the end.

Liam - yes, that would tally with the BP (hmm) Award. The backgrounds are always carefully done in Ganter's portraits.