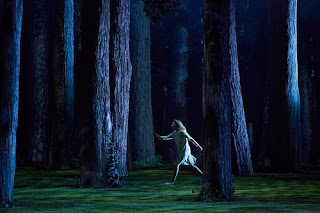 Dyed Moroz, Old Man Frost, had released his icy grip - but not his cold east wind - when we arrived in Paris for six days which grew progressively warmer and then decreasingly sunnier over the weekend (Friday was the zenith, a day I'll never forget). And this was the year in which I got to see Rimsky-Korsakov's Snegurochka, The Snow Maiden, La fille de neige, call it what you will where you will, on stage not just for the first but also the second time - after Opera North, the Opéra National de Paris mounted it in more lavish style, and with world-class singers, but not necessarily more truthfully. Gergiev brought a Kirov concert performance to London, what, two decades ago now, from which I remember chiefly the shepherd-boy Lel of the young Yekaterina Semenchuk. She was down to sing Spring Beauty at the Bastille, while a strong counter-tenor many may remember as runner-up in the 2009 Cardiff Singer of the World competition, Ukrainian Yuriy Mynenko, was cast in the trousers role. 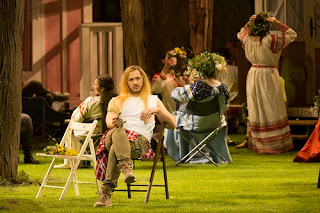 He appeared (pictured above in the second of five images for the Opéra by Elisa Haberer); Semenchuk didn't - though it would be hard to imagine a more authoritative bouffanted grande dame than Elena Manistina - and nor did Ramón Vargas, whose role of the aged and here ineffectual Tsar Berendey was taken by another stalwart Ukrainian, Maxin Paster, who cranked up well but didn't get his second aria. Director Dmitry Tcherniakov went for more of the score than John Fulljames in the Opera North production earlier this year, but made some odder cuts: chiefly the best-known number in the score, the Dance of the Tumblers/Skomorokhi, which at least appeared as an Entr'acte in Leeds (as some compensation, we did get the quirky little march of the Berendeyans, and I loved the 'heralds' singing through megaphones).

The imaginative Russian usually ends up bending the scenario to his will in a way that ultimately doesn't always serve the music best. His idea here was that the thuggish merchant Mizgir is incapable of being enchanted, so no magic spell cast on him when he first claps eyes on Snegurochka. Nor can she succumb to his passion in the end, so the great love duet of capitulation becomes a struggle, which deprives the singing of its conviction (Snegurochka and Mizgir pictured below, in the second of four images for the Opéra by Elisa Haberer). 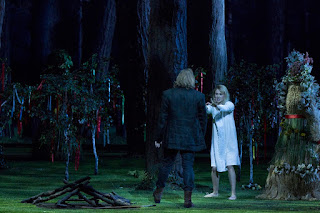 No, this Snow Maiden loves Lel to the end and is seen slowly dying through the second half of the opera (Acts Two, Three and Four). A sacrificial victim like Stravinsky/Roerich/Nijinsky's Chosen Maiden, she doesn't melt with love and the first rays of the sun but drops down dead, lying there at the front of the stage while everyone ignores her in a stomping dance with a fake fire sun rather than a real one at the end.

That didn't work for me, and as a whole, to my surprise, I'd rate Fulljames' balance of magic - those video projections, exquisite - and realism higher. But in every respect the vitally beautiful Aida Garifullina was Snegurochka incarnate; our hearts went out to her from the start. She was, of course, one of my two work-related pretexts for spending nearly a week in Paris; the interview, a total delight, will appear soon on The Arts Desk. That crystalline lyric voice carried even in the horrid vasts of the Bastille Opera (not all the choruses crossed the proscenium arch, though the soloists were mostly clear). And at least Tcherniakov forsook his beloved grim, realistic interiors, which always look good in the director-designer's work but aren't always apt. We entered the auditorium to witness a forest community complete with caravans and dacha-houses, dwarfed by enormous pine trees which rose to the full height of the stage and went back as far as the eye could see. That kept us happy while the Prologue unfolded in a smart (stage?) school where Madame Spring put her proteges delightfully through their paces as a chorus of birds (pictured below). 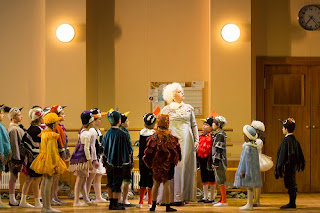 Veteran Vladimir Ognovenko - whom I think I last saw at the Bastille as a gruff Kutuzov in Prokofiev's War and Peace - is as easy on stage as Manistina, plausibly an old couple whose late-flowering love-affair went awry. Mynenko sings as artistically as any counter-tenor could as long-haired, slightly repulsive Lel, but I'd still prefer a fruity mezzo; Heather Lowe for Opera North looked just like a teenage boy, but didn't have the dark Slavic colour). There was luxury casting for the 'other' soprano, sensuous, experienced village girl Kupava, in the shape of dramatic soprano Martina Serafin, whose Marschallin in Vienna was Crespinesque and who totally redeemed an otherwise dreadful production of a dreadful opera, Giordano's Andrea Chénier, in Zurich (I've not seen her Tosca and wonder whether she really still has the top for Turandot). Neither as youthful nor as hilariously crazy as Elin Pritchard in Leeds, she still produced beautiful sounds and relaxed, intelligent acting. That's her in the middle of the ensemble scene pictured below. The real let-down was baritone Thomas Johannes Meyer's Mizgir, brutal and constricted beyond the call of duty. 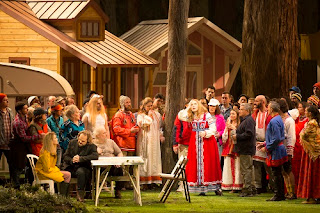 I wasn't entirely convinced by the conducting of the Mikhailovsky Theatre's Mikhail Tatarnikov; as with Leo McFall in Leeds, there were times when the score could afford to expand more opulently, and the last duet felt rushed - didn't help that it was cut in half. The first oboe was having a bad night, too, with many notes not coming out. But perhaps the most bewitching scene in the entire score, the desperate Snegurochka's summoning of her vernal mamma, really glowed, and it produced the most beautiful tableau, too, as the forest constantly revolved. For symmetry's sake, it might have been better to return to the school room, and the forest was stuck there for the scene in Berendey's court, too; but this was the highlight for most of the audience, and it's the scene that Garifullina loves best, too.

Anyway, I'm glad Tcherniakov is making a case for the best Rimsky-Korsakov in Paris, rekindling earlier glory days at the beginning of the 20th century, and we need it at the Royal Opera too. High time they engaged Garifullina before she's booked up entirely; and in earlier days a complete Decca recording would have been built around such perfect casting, She told me in our wonderful interview on Sunday that her next wish is to sing Manon in Vienna, but I'd be even more delighted if somewhere like Glyndebourne would stage Strauss's Daphne for her; I'm sure she could manage that lighter soprano role among his operas already. So, exciting times ahead, and they couldn't happen to a lovelier person. I'll put in a link here when the interview's up and running; and needless to say much remains to be written here about Paris in the springtime, even if I haven't finished with Oslo, Amsterdam, Gloucester or Tallinn yet...
Posted by David at 16:58

No sign, it seems, of Garifullina coming across the Atlantic. Do hope that changes in coming years.

David I have to tell you that your reviews of shows is always a pleasure to read, you do write well and to the point.

She's young, Susan, so I'm sure it will happen - but much of the charm is her youth, so they and Covent Garden had better not leave it too long.

And thank you, Laurent. I know you and Will would have been (mostly) enchanted by this grand spectacle. Interestingly while in Paris we saw another diplomat, Laurence rather than Laurent, receive her medal for services to date (she already has the Legion d'honneur). How you both would have loved swanning around the Minstry for Foreign Affairs. We even got to sit on the gold bath installed for George VI...

Sit on and not sit in? Oh Oh!!! Indeed those evenings can be fun. We are going Monday night to Fanningbank the Official Residence of the Lieutenant Governor of PEI for a reception pre concert for the visiting National Art Centre Orchestra and Maestro Alex Shelley. Will being a Board member of the PEI Symphony we were invited. A beautiful Palladian villa on the water, hopefully I will not be asked to give a tour, I am one of the senior docent.

Go on, Laurent, yoi know you want to give a tour. Not even if they shout 'Larry, Larry, Larry'?