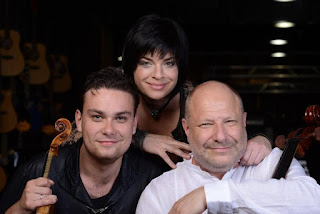 I wasn't able to be at the BBC Music Magazine awards this year - too busy Snow Maidening in Paris - but at the end of my write-up of last year's ceremony, I pointed out that the Smetana Trio's disc of Martinů Trios was already on my shortlist for best of the year already (pictured above, violinist Jiří Vodička, pianist Jitka Cechová and cellist Jan Pálenícek) . It won the chamber music category at the 2017 awards, and Czechia has been going wild with excitement. What it probably doesn't know is the golden thread that led to the nomination - my Czech friend Jan sending me the disc, my pressing it on reviews editor Rebecca Franks so that it made the pages as another glorious Supraphon issue that might have been in for an award, of Martinů's Ariane and Double Concerto mentioned here, didn't.

As a Martinůmaniac, I'm of the opinion that Maxim Rysanov's disc of sonata, duos and Rhapsody-Concerto could also have won the previous year, and this absolutely delicious tetralogy of cantatas ought to do so in 2018 (that review isn't found on the hopeless BBCMM search engine). 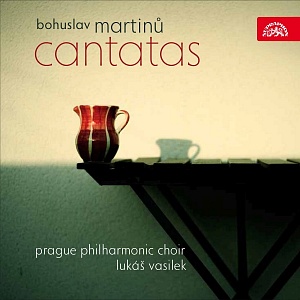 Golden times for the reassessment of the last towering figure of the 20th century not to be widely acknowledged as such. And on 9 May you can hear Nicola Said reprise her Ariane in the final scene from that little masterpiece at this year's Europe Day Concert in St John's Smith Square. That's all I'm saying on the subject for now. 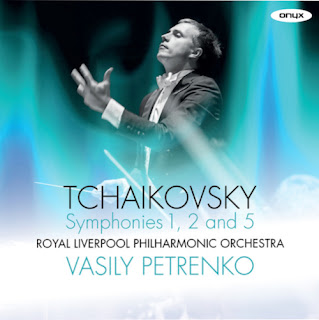 Frankly I'd have chosen the trios disc as the top award over Vasily Petrenko's Tchaikovsky Symphonies 1, 2 and 5, though I'm proud that I enthused over that one, too, in the pages of the magazine (again, the search engine on the BBCMM website doesn't locate it). The May issue had a riven choice over raves - which should be Recording of the Month, Paavo Järvi's Strauss Heldenleben and Don Juan with the stunning NHK Symphony Orchestra, or 87-year-old Bernard Haitink's latest Mahler 3? Rebecca went with Paavo in the end. And in the June issue there's going to be a spotlight on another stunner, leader of the Norwegian Chamber Orchestra Terje Tønnesen's transcriptions for string orchestra of the two Janáček quartets, the First also to be heard in the context of a thrilling adaptation of Tolstoy's The Kreutzer Sonata read in both English - brilliantly - and Norwegian by the actor Teodor Janson. It's the luck of the draw - months can pass with only three-star-max discs, and then all these glories come along at once. 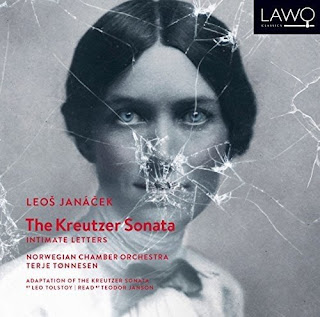 Anyway, I'm proud that the magazine continues to flourish in difficult times. And now, on the BBC front, we have the Proms to get excited about - for me, it's one of the best seasons on paper for years. The launch is always fun, and that was another one I had to miss last week. A single highlight for me? Jakub Hrůša's all-Czech variations on a Hussite chorale with the BBC Symphony Orchestra on 26 August. On 13 August, before a double whammy of Rachmaninov's Second Symphony in the main Prom and the Vespers sung by the brilliant Latvian Radio Choir in the late-nighter,  I'll be talking about the composer's use of Russian Orthodox chant in his orchestral music.
Posted by David at 09:06

I was surprised to see a photo of drummer extraordinaire Gavin Harrison on your post, holding a violin, then I read of course that it is not him, but there is a marked resemblance to Jirí Vodicka. Harrison is a truly great virtuoso not just a run of the mill tub thumper. I had just that minute before read a review of a much earlier work by his current band, (described by Richard Williams as “the concept that rock can be built on a scale to rival classical music” http://bit.ly/2qeeD86) so it was a startling coincidence.

However I know I too could be almost as big a Martinu fan as you, and being sorely ignorant of most of his work these new releases are just what I need to explore him some more. Something to look forward to in these troubled times, along with the Proms which seemed to have lost their lustre last year, not to mention the St John's Smiths Square concert which we are all excited about. It's one of my favourite halls - we went to a fantastic Carmina Burana performance there not long ago.

I don't know Gavin Harrison but Vodička is certainly appealing... Maybe I should investigate.

Sounds like the whole family is coming to the Europe Day Concert - that's good news. I guess you've responded to J with your numbers: tickets are tight now. On a positive EU note, I was walking across one of the pedestrian bridges to the Southbank Centre on my way to Haas's in vain, a work which you would have found stunning, I'm sure, holding my blue brolly with its yellow stars aloft when a nice German woman congratulated me and said she wanted one. Married to an Englishman and horrified by friends who'd voted Brexit and were now saying they hadn't been properly informed. We were both scornful of the deluded who didn't bother to follow up what was right under their noses, even if the Remain campaign might have done a better job.

This is my favorite line from your post: "Czechia has been going wild with excitement." Lifts the heart.

Well, I might have exaggerated there just a bit. But Jan sent me various links to papers and coverage, and they did seem very proud of their great musicians. Even the tabloids ran stories...

"Even the tabloids ran stories..." If this would happen the world over, it would be a much better place.

The difficulty with Brexit is that the vote was pushed into a Leave majority by the anti-elitist vote ( seen also in the support for Trump and Le Pen). " All these people in London with their glasses of wine and champagne" " Aha ! This shows that we can make decisions too !".....actual quotes. If we have another referendum ( on the terms achieved - I am against referendums but I see no other way out) there might be a surge to vote Leave again, as the new referendum might be seen as an attempt by the elite to get their own way (which basically it would be). The tragedy is that this aspect of the matter has little to do with our membership of the EU.

Agreed, Sue. Culture is a little more deeply embedded in Czechia than many other European countries. I don't see even the London Evening Standard including classical and opera among its CD reviews.

Spot on, Sir David, if tangential as ever.

I just want to thank you for your support of the Martinů 'case' (and Czech music in general) you demonstrate again so clearly here.

One little historical note might be of interest. Josef Páleníček, the father of the cellist Jan Páleníček, was a famous pianist and a younger personal friend of Martinů. They met in Paris in the 1930s when Páleníček studied piano at the École normal de musique and composition with Albert Roussel. At that time, Martinů was already a well established composer.

Páleníček the pianist was a dedicated Martinů interpreter. He recorded at least five discs of Martinů music, including the piano trios with the Czech Trio in the 1980s:

Thanks, Jan. I knew the name but not the link with Martinů. So much more to explore when it comes to this toweringly great composer.