May (and misericords) in Gloucester 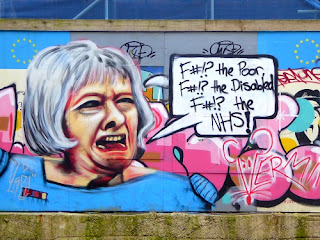 Actually it was in early March when I went to Gloucester to give a talk on Rachmaninov's All-Night Vigil (better known as the Vespers), returning to the place I hadn't seen since I was a choirboy 41 years ago when I fainted in the cloisters (not, as I quipped to my audience, in excitement at the Harry Potter film location, since he wasn't born then, but from being affected by the heatwave of summer 1976).

So the reference is obviously to Mrs Mayhem, and the graffiti artist enriching one of the city's many rack-and-ruin spaces has nailed it. A man was also looking at the artwork as I snapped, and he remarked, 'what a waste of talent, eh' - I presumed he meant of potential which might have been engaged in true artistry, to which I replied that at least it was being seen, if only temporarily. Banksy would approve. The composite work has been built in collective style, and how gratifying to see the EU flags. I presume it's the same artist's rat 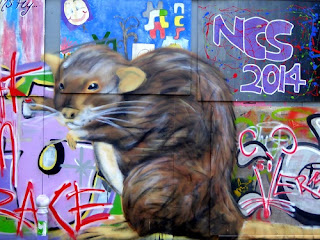 and this cubist fox - is it a reference to an extant work? - is really very fine. 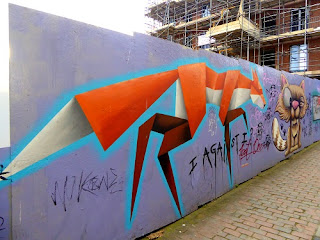 The centre of Gloucester is mostly a planning disaster of the 60s and 70s; whole rows of medieval houses were knocked down, all too typical a response of the times (more on that anon). So I thought that on my arrival in the early afternoon I'd go and see what had been made of the docklands. One part has been conventionally swished up to provide luxury flats 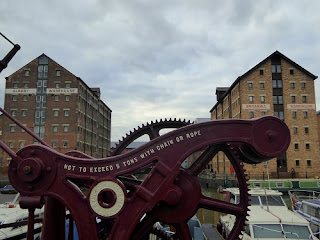 and the usual shopping-and-eating zone (where I was grateful of a Carluccio's for lunch). But just beyond is unreclaimed industrial archaeology, buildings which are presumably destined for the same treatment but which have a real atmosphere at present, with buddleia sprouting everywhere and pigeons all over the place. 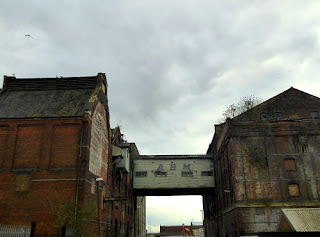 I headed back into town 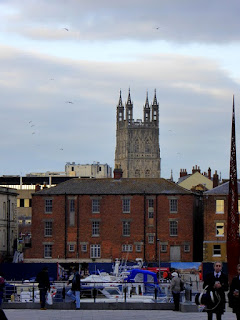 and straight for the cathedral. 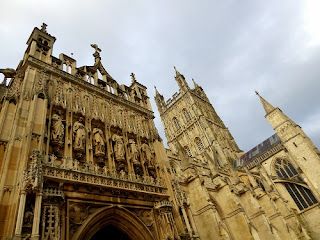 The lovely close is currently an archaeological zone and will be for some years to come; in beginning to reclaim it from the car park which it had been for decades, can you believe, excavators came across treasures in old foundations. 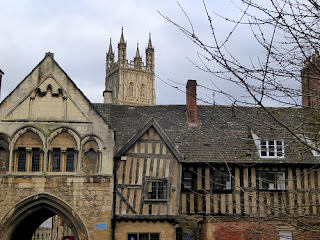 but the old church immediately beyond the cathedral close is surrounded by a council estate, and if you head up Three Cocks Lane, you're soon into this. 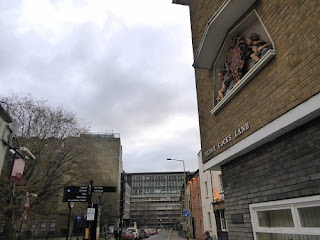 Waiting to catch Evensong, conducted by the distinguished musician in charge of the Gloucester Choral Society who were supporting my talk, Adrian Partington, I had some time to potter around the cloisters 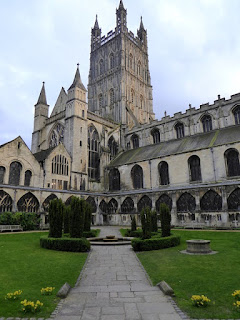 which within boast some of the finest fan vaulting in the country as well as the earliest (finished in 1412). 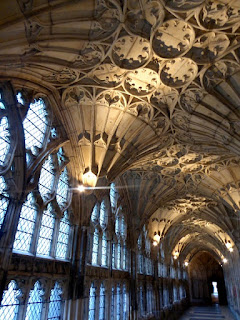 What stained glass there is turns out to be mostly Victorian imitation of the medieval, 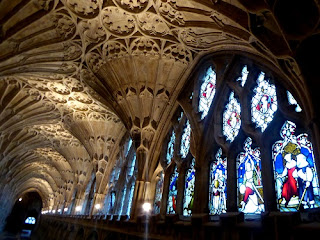 but well done, I think. 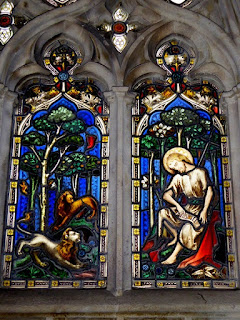 It's clear that the cathedral proper is a 15th century encasement and adornment of a Norman building, but since I'm more attracted to the former, sitting in the choir for Evensong - a very ascetic one - and looking up at this 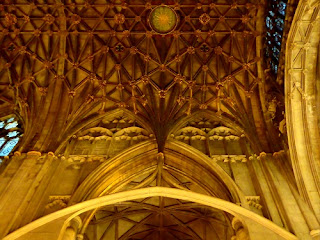 was a joy (I hasten to add the picture was taken after the service, not during). A shame it was too dark to see the glory of the east window. Afterwards I managed to lift up my own stall and others to look at a few misericords - must return to see the rest of the 58. Mine showed a young fox in the huge talons of an eagle 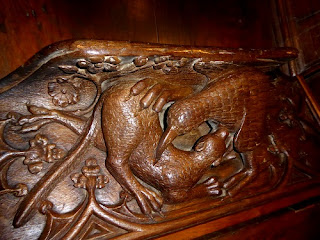 while a neighbour was one of the liveliest, two men playing with dice or coins. 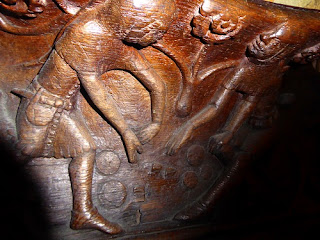 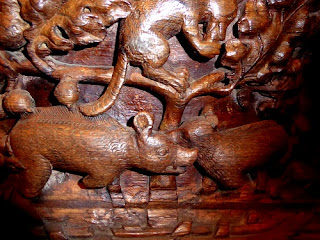 and on the other side, there are hunting/riding scenes 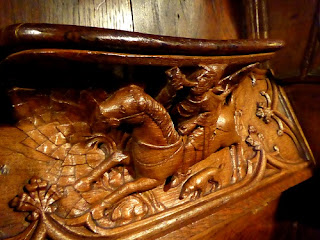 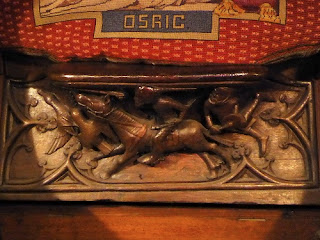 and a recumbent man with an arm around a donkey, possibly a reference to Balaam's ass. 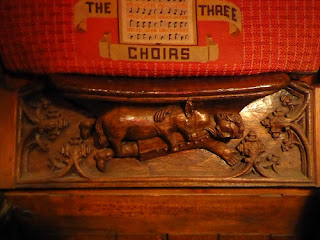 Even the 'modern' additions, though obvious like this Adam and Eve, are finely wrought. 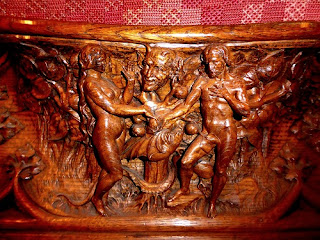 A brief chance to walk around reminded me that back when I was a chorister here, this effigy of William the Conqueror's oldest son, Robert of Normandy, was in the middle of the choir - not so now - 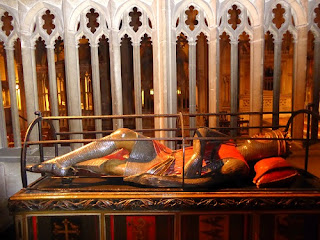 and of course the immense importance of Gloucester, so diminished by the decadence of the town - the posh folk all seem to live in Cheltenham now - is symbolised by the tomb of Edward II. 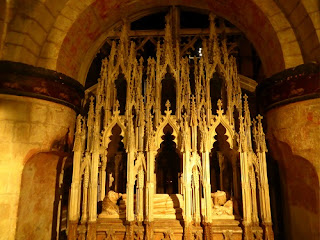 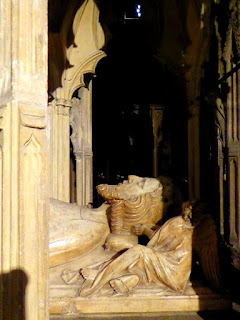 By the time I came out it was dark 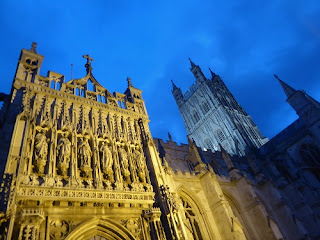 and I went to a very friendly pub in the main drag opposite for fish and chips before arriving for the talk, which was held in the timber-framed hall with remains of old wall-paintings. 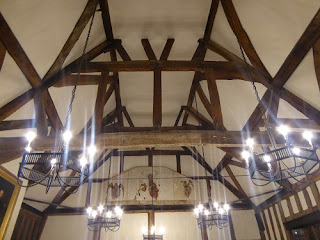 My loss that I couldn't get to hear the performance of the All-Night Vigil the following week, but we have the splendid Latvian Radio Choir performing it in a late-night Prom on 13 August. Which leads inevitably to a second plug for my afternoon talk that day, which will be different from the one I gave in Gloucester but possibly with a few overlapping excerpts.
Posted by David at 12:56

The Bishop of Gloucester is not the first woman bishop but she is not only the first diocesan as opposed to suffragan but has been shot into the House of Lords ahead of the queue ( the Archbishops and the bishops of London Durham and Winchester always sit, but the others usually have to wait their turn by seniority of appointment)

Not many people know that. I trust that 'shot into' doesn't mean you had another fate in your subconscious for lady bishops and their ilk.

Women make very good priests and no doubt bishops. My objection is that the arguments in favour are nearly always secular, to do with the advancement of women in the general sense, which in the face of the revelation of Christ and the mysteries of life does not seem to me appropriate

But then the CofE as well as the Catholic church is far too full of pecking-order and advancement generally (and mostly for men) - it was thus with any career - and what we love about Pope Francis is that he doesn't seem interested in all that. Look at Chartres, how worldly and grand! That and the ridiculous bickering about gay celibacy etc would turn me off ever getting more closely involved with the Anglicans.

The difficulty for the CofE is that the church in the Anglo-Saxon countries does not regard homosexuality as a sin and the African church ( very strong in numbers) does see it as a sin. Hence the muddle and compromises. The "no physical sex" rule seems to me theologically heretical (Matthew 5 27 and 28). The matter would be resolved by a schism, but that would have other consequences. The same disagreements exist at Rome and, although Francis is strong on opening the arms of the Church to gay people, he does not go very much further than that. Also the CofE is more democratic than Rome, which means that questions are argued out much more in public. On some issues the faithful just take no notice of a rule imposed by Rome, as with contraception

Then schism there should be. Not that I give a toss.