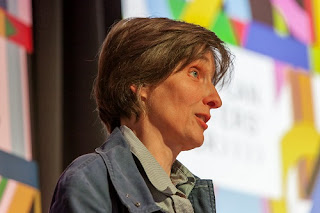 She took us by storm the Wednesday before last, briskly and with a fabulously emphatic delivery in a 20-minute speech full of savage indignation. Surprised to find tears in my eyes so soon after their regular occurrence throughout the previous evening's Europe Day Concert. I hope you'll read the speech in full here on the Royal Society of Literature's website - the organisation had much to do with the event, as did EUNIC (European Union National Institutes for Culture), though the host was the British Library - and that there will eventually be a podcast of the delivery, so energetic and impassioned was it (event images by Jolly Thompson). But in any case it's worth putting up the first paragraph, since it also encases a stunning quotation from Primo Levi.

So I am a citizen of Nowhere. Intellectually, culturally and as a member of my species, I am and must be a citizen of the world. This is simply logical and a matter of self-defence. As Primo Levi, one of the consciences of Europe, tells us “Many people – many nations – can find themselves holding, more or less wittingly, that ‘every stranger is an enemy’. For the most part this conviction lies deep down like some latent infection; it betrays itself only in random, disconnected acts, and does not lie at the base of a system of reason. But when this does come about, when the unspoken dogma becomes the major premise in a syllogism, then, at the end of the chain, there is the Lager.” To be in any sense healthy, I must be a citizen of the world. I belong to that Nowhere. 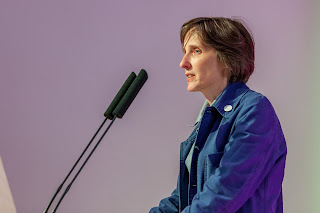 And thence Kennedy seemingly freewheeled, as if she were improvising (the transcript proves she wasn't). Yet she kept a structure, enlarging on the question, where is Nowhere? (For a writer, and a thinker, everywhere and anywhere). She made a strong attack on our lack of reading matter from other countries: 'For more most of my lifetime as a writer, less than five per cent of all our books printed in any year are translated from any language'. Cited striking examples of writers who took or borrowed from other cultures. Encapsulated what Brexit Little England may be like and why the likes of us will be OK:

It seems clear that Brexit will leave us trapped on an apparently increasingly racist island with faltering press freedom and crumbling press reliability, adrift in a shrinking culture enthusiastically rejecting real-world knowledge of all kinds. Dark money, calculated online influencers, our public discourse bought and sold… So we’ll look elsewhere for inspiration, for facts. We did anyway. Their preciousness will increase. The urgency with which we attempt to communicate will grow. We may long for news of countries that aren’t closing libraries by the hundreds, aren’t destroying their own education system and undermining English language teaching, any language teaching, for a generation.

How it will be for others who don't have our opportunities or our roots is more worrying. That was one of the questions grappled with - mostly a bit too nebulously - in a panel discussion with another very intelligent writer, Francesca Melandri, and one who presumably is very good but not, on this evidence, a nice human being, Clemens Meyer. He alienated me before he even uttered a word, his body turned away from the other speakers in haughty apartness. He made most people laugh, including his generous fellow guests, 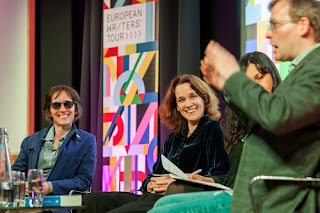 but actually took a very long time to make a perfectly salient point (that his kind of writing thrives in a time of dissolution and uncertainty, though which time isn't?). And then there were the 'questions' from people who only really want to hear the sound of their own voices.

But back to Kennedy, whom I hope you'll read - not just the speech, which concludes with a perfect segue to William Morris's News from Nowhere - Kelmscott frontispiece seen here - 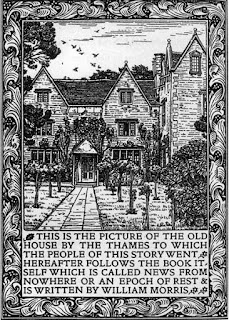 but also the novels; we have one here, the most recent, Serious Sweet, which I intend to turn to once the first half of my Waugh binge is over. The author seemed straightforwardly pleased about that as we parted;  I happened to accompany her to Kings' Cross tube, and thought: this is the sort of person I'd treasure as a friend. Anyway, we have her words to serve that purpose; one can ask no more. How rare are these people who speak so directly, crystallise so much with their choice of examples and metaphors. True authentics, present in every age but hard to find.
Posted by David at 09:31

A brilliant speech, and heartrending. Her attentiveness to language itself makes the point: "We can spend any amount of time boasting about how large a vocabulary English has, but that’s a consequence of its multiple thefts of Hindi and Persian and Norse and Germanic words and all manner of other words and the doubling up of terms produced by the legal and administrative consequences of a Norman invasion."

Glad you liked it. I'll post the link to the sound version when it appears, since her delivery seemed so spontaneous. The above point, of course, links brilliantly with Stewart Lee's sensational 'coming over 'ere' speech taking us back in history.

I simply don't understand why Labour refuses to oppose Brexit in principle, as the LibDem and SNP have chosen to do. Most countries operate a "second thoughts" amendment to any plebescite where the outcome is uncertain as is the case here. What is Labour afraid of? Of being accused of being "undemocratic", obviously, but Jeremy Corbyn has spent his life opposing the democracies of Party conference decisions, the Parliamentary Labour Party etc. Why the silence? Why the pusillanimity?

I'm as baffled as you are, John. I wonder if the roots don't lie in Corbyn's anti-capitalist standpoint; he seems to have viewed the EU as one big financial club without taking into account the laws and the peace. It means that neither party is making any case for how Brexit should be handled - let alone whether it should be handled at all - in this most confusing election. When it comes down to it, I have to vote Labour for the sake of our excellent local MP, and because of the many good things it stands for. But I wish the Lib Dems could have gained a little more traction.