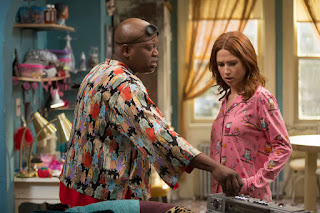 The thinking behind Tina Fey and Robert Carlock's brilliant creation Unbreakable Kimmy Schmidt is funny/witty enough in its approach to an unusual subject: a girl kept underground by a religious fanatic for 15 years tries to adjust to the 'real' world of New York. There are four very funny main characters. But did anyone quite realise the extent to which Tituss Burgess, tenorish star of musicals and openly gay actor, would steal the show?


Undoubtedly one of television comedy's immortals already, 'Titus Andromedon' (born Ronald Ephen Wilkerson in Chickasaw County, Mississippi) is a wildly insecure out of work gay actor going for various bizarre jobs and alternately helping/hindering indomitable Kimmy as she tries to negotiate a brave new world with unquenchable optimism. The chameleonic facial gestures are very much par for the course of a firecracking script. Difficult to choose a favourite strand to date, but Titus's bid to hog the media when he heads down to Indiana with Kimmy for the trial of the phony Reverend Richard Wayne Gary Wayne (John Hamm of Mad Men, superlative in a comic-creepy role) has to top the bill. And the hire-a-costume confrontation is surreal, too. 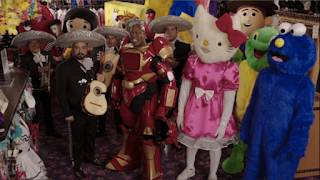 I love it all, though, title theme included - short, snappy and speech-melodic as the incredulity of a local resident at the rescue of the 'Mole Women' is set to music (for context, watch the very first episode). You also have to love the strand where demented socialite Jacqueline Voorhees (Jane Krakowski) clashes with her native American Indian heritage - at the point we've reached, wackily interlaced with Titus' one-day marriage coming back to haunt him. 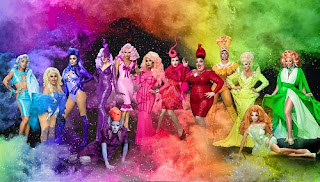 This is one of our only two telly indulgence on spare evenings at the moment. Sad to say that the latest series of RuPaul's Drag Race is desperately disappointing - the formulas at last begin to wear thin with the least attractive group of competitors ever (though I'm rooting for the gorgeous Valentina). Maybe time to call it a day? 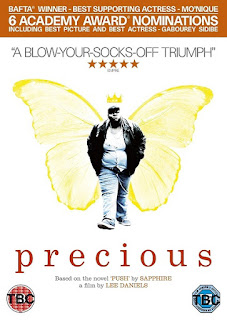 On a more serious note, why did I never see Precious when it came out? What a bloody, searing masterpiece of a film. Ultimately feelgood, but the trajectory is constantly buffeted sideways. Such a harrowing journey for teenager Claireece Precious Jones, twice pregnant by her father, more or less illiterate at the start and abused by her horrific, manipulative mother, too - though we get to understand the monster in Mo'Nique's amazing performance (Mo'Nique below doing the right thing). 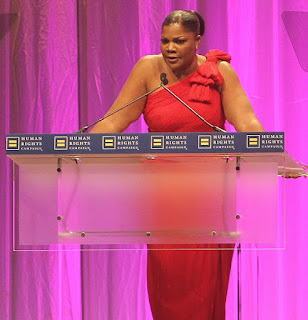 There are subtle characterisations, too, from Mariah Carey as Precious's not entirely nice social worker and Paula Patton, who lights up the screen as her alternative-school teacher.

Gabourey Sidibe had never acted before when she turned up to audition for Lee Daniels's film. Why she didn't get an Oscar, and why the film didn't sweep the board, says all too much about Hollywood. But we knew that already. Doesn't matter; this is one for the ages. I've ordered up Sapphire's Push, on which the film is based - not a true story, though it has the ring of a terrible authenticity - and its sequel, The Kid, about Precious's son. Piles of stuff to read now.
Posted by David at 14:17