Or rather no interiors, and no pressure to hoof it from church to church as we do every September. This time the wonders were entirely natural: a bluebell wood 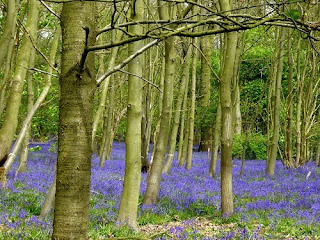 and a field full of cowslips 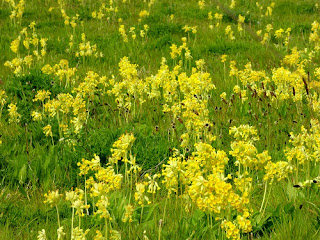 chief among them. We did see one church tower close enough, that of St Mary's Erpingham, but had to turn off up a lane before reaching it. The scene, nevertheless, is one that can't have changed, a bit of wire fencing apart, for centuries. 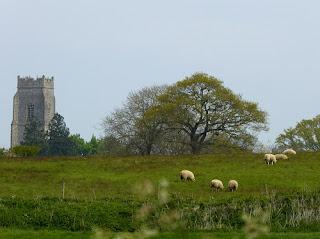 But before I give more context, I've been owing generous donors a final record of our achievement, and it's a good one - namely £4004 between the four of us (pleasing symmetry) which made All Saints Burnham Thorpe the top fundraiser for the Norfolk Churches Trust in 2016. Many thanks to all who gave. And a bit of shameless self-publicity in that, having won two categories in the photocompetition backed by Cheffins, I reproduce the two pages below from the Eastern Daily Press. The spiderweb framing St Peter and St Paul's Honing I'm pleased with, somewhat more puzzled why they chose the stained glass at St Peter's Ridlington for the detail. 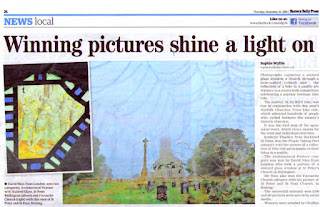 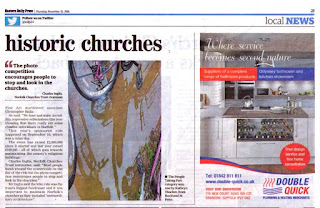 Our walk with Southrepps-based friend Jill on Bank Holiday Sunday was a delightful and varied circuit around and beyond the Blickling estate. I don't think we've ever walked in Norfolk in the spring, and the greatest pleasure was the light green of the newly-leafing oaks. 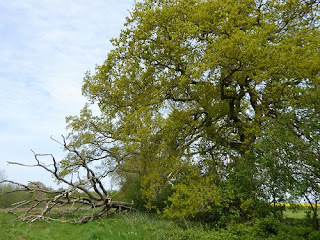 The National Trust has maintained the paths around the estate superbly, especially the boardwalks over beautiful marshland. 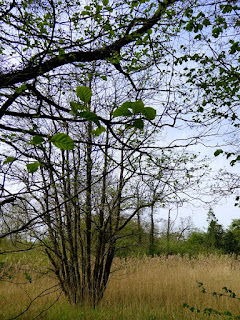 Part of it should be bright yellow with irises in a couple of weeks' time. These are wetlands around the lovely river Bure. 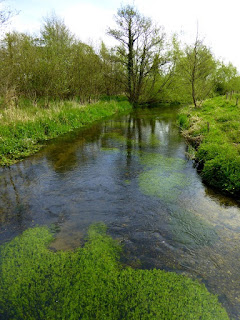 Within a short space of time, I clocked four species of butterfly, including a delicate blue, a Brimstone and this Speckled Wood (Pararge aegaria) . 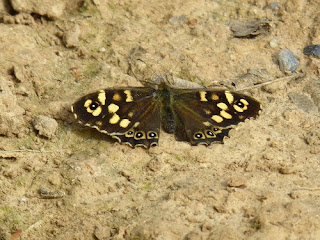 They eventually give way to fields, with the inevitable rape colouring the landscape yellow. 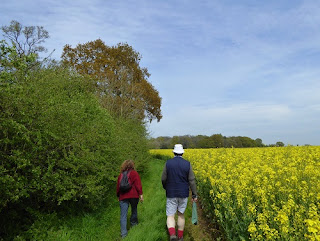 To pinpoint our bluebell wood might be to invite its spoliation - whenever one's identified in the press, everyone flocks to it. This was our first glimpse. 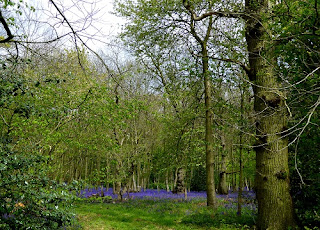 I wish you could hear the intense birdsong and smell the bluebells too. 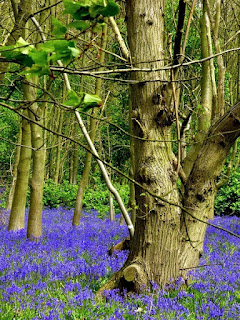 Coming out of the wood, we took a lane around the edge, again with plenty more splendid oaks 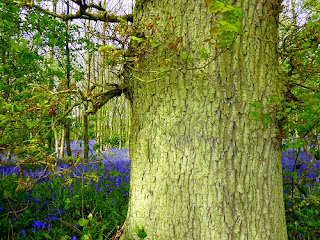 and then a little bunny appeared. From the way it sat there quivering there might have been something wrong with it, but nothing obvious. Anyway, we left it with a question mark 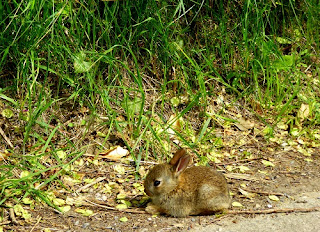 encountering a friendly dog as well as this horse and foal 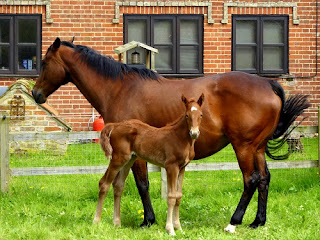 and then headed towards Erpingham. This is where the church tower led us forward for a bit before we turned left. 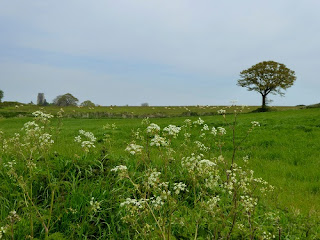 No lunch to be had in the pub Jill had planned for our stop - power failure and overbooking, familiar story - so we walked a mile or so further than planned, past a thatched, Dutch-gabled barn at Limetree Farm 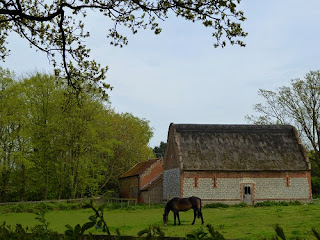 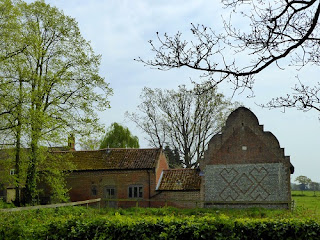 to catch some necessary sustenance at Alby Crafts and Gardens. An eccentrically adorned tea room serves good lunch and massive slices of locally made cake. 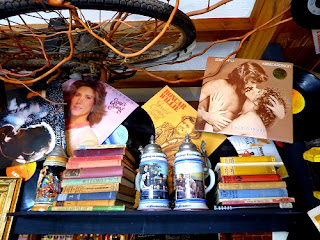 Here it was that we first heard, then saw the peacocks. And one of the four males faffing around the solitary peahen decided to put on a display. 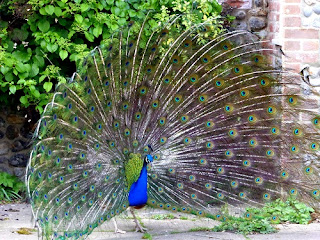 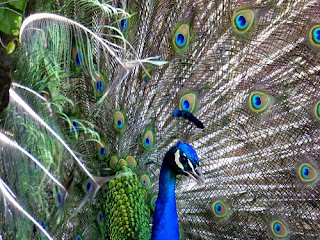 Reluctantly giving the gardens a miss, we headed back to Erpingham, but by a different route along the lovely Thwaite Common. Then to rejoin the Weavers' Way along what passes for heights in this part of the world, before hitting the cowslip meadow. 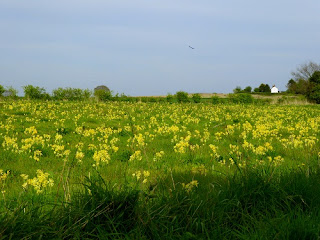 We headed back down to the Bure valley 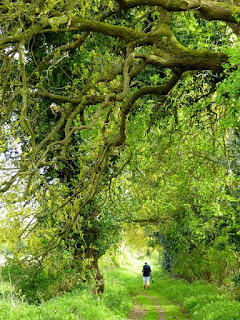 which is very paradisical this side of the Blickling Estate 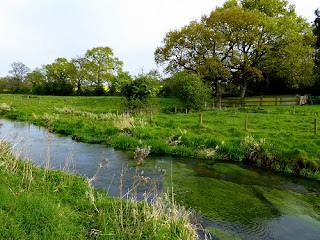 We eventually re-entered the Estate through a wood leading up to the lake. 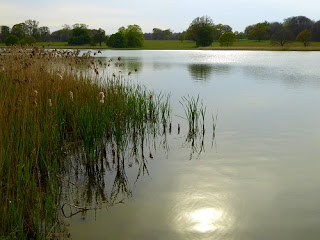 I wonder if Henry James had this setting in mind for the outdoor scenes at 'Bly' in The Turn of the Screw. With the now-watery sun it had a faintly sinister feel 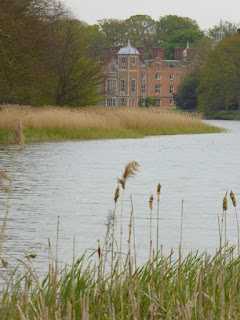 but the waterbird music kept it magical. A crested grebe was leading her brood across the water's surface. 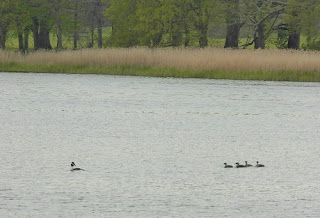 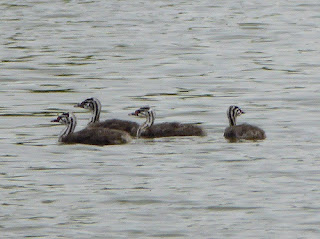 So back to the car and the house, which I visited on a City Lit summer school many moons ago when my beloved Trude Winik was still alive (she took some very lopsided photos in the drive which I still treasure). 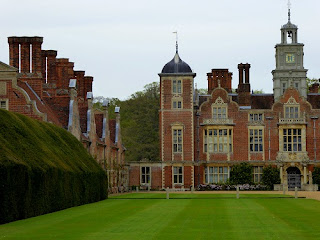 Sunday's excursion to see the angel roof of newly restored St Peter and St Paul's Knapton - all scaffolded up and shut down when we visited in September - and then for a fresh crab lunch at the Overstrand shack, followed by a walk along the ever-crumbling cliffs, will have to wait for another instalment. I'm getting bad at keeping my promises of second chapters here these days, but the wonders of Knapton can't be ignored.
Posted by David at 12:16

Bravo on the donations and the news report photos. We've been enjoying the wildflowers here in Derbyshire today, including bluebells, but no carpet of them like that you've shown here. We did, however, walk past more wild garlic in bloom than I've ever seen. There was no mistaking its aroma, you can be sure!

Yes, now is peak wild garlic time. I did have a pic of a drive full of wild garlic, but thought I'd better go easy on the diversity...a wood full of white wild garlic flowers can be a beautiful thing, too (and I like the smell, of course). Looking forward to seeing you here soon.

David, such a beautiful collection of your photos! I couldn't choose a favorite and am glad I don't have to. Congratulations on your competition honors - proud of you! Seeing an image of bluebells, or even hearing the word, always brings to mind the bluebells passage in Howards End, and your photo here is just as evocative as Forster's phrasing. Gorgeous! -- Elizabeth

Thanks so much, Elizabeth. I'd completely forgotten about that passage in Howard's End; you have sent me back to search for it, though first I must get on my bike and catch a bit of Thames blossoming on route to Hammersmith...It really was as magical as it looks, heightened by the birdsong and the scents...

Congratulations good sir - to you and your team. And thank you for bringing a touch of English spring into our lives. We are in what is termed Spring here but I would think is early Spring everywhere else.

As always I feel a part of your hikes and for that I thank you.

Join us in September on our next walk for the Norfolk Churches Trust... Golly, though, it did feel good to get out into real country again. Been city-bound too long. At least you have nature on your doorstep.