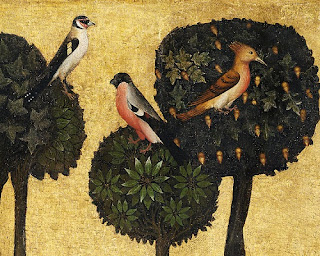 So here we are still in London, and not in Norfolk as planned - J has a cold. No matter; it's good to be at home after a week of rushing around Europe. And I always love the reflective period before Easter itself. Very happy, in looking for images to accompany my review of the Dvořák Requiem on Thursday, to have rediscovered a masterpiece which stunned me when we spent Christmas in Prague back in 1990, the altarpiece from the Vyšší Brod Monastery. My Czech friend Jan reminded me of it in sending a postcard of the above, taken from the depiction of Christ in the garden of Gethsemane. 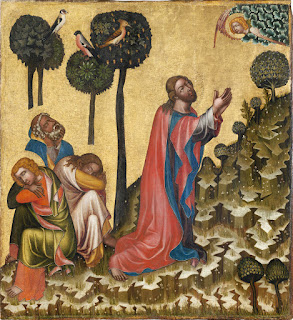 The mourners at the cross are expressive, too. 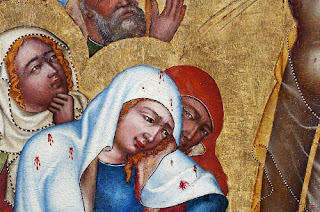 We spent an hour and a half of contemplation on that theme yesterday afternoon in Westminster Abbey. Our dear Spanish friend María Jesús wanted to meet up, and though I fear we let her in for a longer ritual than any of us had expected, I hope she found it a treat. Anyway, we did get to chat over tea afterwards. That's Giotto's great crucifixion on the order of service cover, of course. 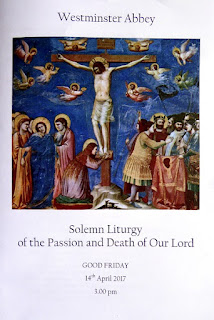 Certainly it was surprising to find that the congregation queueing and then packed in around the central tower didn't consist of casual tourists, but a plethora of believers (among which I do not count myself, however much I take from the Passion narrative). Indeed, the number of folk wanting to venerate the cross meant the whole service took much longer than expected (the Communion was more streamlined, with priests serving both aisles). Never come across this business before - nor has J, with his Catholic upbringing - and found it all a bit mumbo-jumbo-y, but then I guess so are the rituals which I've grown up with since I was a choirboy, and I say the Creed without a second thought.

The order of service cannily embraced a diversity of styles and nations - plainsong, Lutheran and Anglican hymns, and composers Spanish (Victoria - the central St John Passion, in which 'composition' is not much present, but it was splendidly delivered by two tenors, bass and choir), Italian (Lotti) and Austrian (Bruckner). Much as I love anthems like Locus iste, which we sang at Stephen Johnson's and Kate Jones's wedding, I blush to say I didn't know the latter's Christus factus est, and it's a masterpiece, covering so much of the composer's mature style in such a short span. The Westminster Abbey Choir sang it with magnificent fervour in the climaxes. Here it is performed by, of all things, a Japanese high school choir, and very well, though you need to look away from the gurning individual among the boy-men...


Some of the details in John 18 and 19 took me by surprise. Hadn't realised, for instance, that Pontius Pilate did what he could to avert the sacrifice. And this I love: 'When Jesus saw his mother and the disciple whom he loved standing beside her, he said to his mother: "Woman, here is your son." Then he said to the disciple: "Here is your mother". And from that hour the disciple took her into his own home.'

On which note, there's a marvellous poem on the Stabat Mater theme by Joseph Brodsky in his Nature morte. I came across it as the third of Estonian-based, Ukrainian-born composer Galina Grigorjeva's settings gathered together under the same name. It was high time I listened to the disc by the Estonian Philharmonic Chamber Choir which had been sitting here for too long. Grigorjeva calls the poem 'Who are you,' and here it is.

Mary now speaks to Christ:
'Are you my son? - or God?
You are nailed to the cross.
Where lies my homeward road?

'Can I pass through my gate
not having understood:
Are you dead? - or alive?
Are you my son? - or God?'

Christ speaks to her in turn:

Alas, this setting isn't available on YouTube, but there's a marvellous film there which includes the second setting, 'The Butterfly,' remarkable especially for capturing Grigorjeva's spirit as she talks to the choir about it. I'm waiting for her score of the new and remarkable Vespers I heard premiered in the Niguliste (Church-)Museum last week by the stupendous Vox Clamantis choir. She sent me a very polite email saying she couldn't send it or hand it over just yet because she'd noticed some mistakes. A composer of obvious and rare integrity.


Finally, a few more seasonal flora shots from the cycle home after the service yesterday - tulips in the meadow arrangement in front of Clarence House 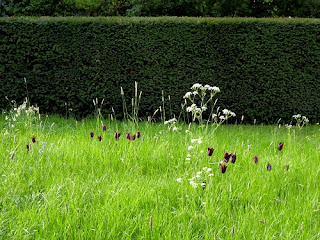 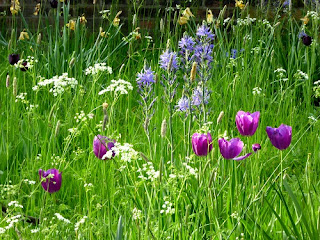 and wisteria backed by white lilac - both out already - in Launceston Place, the magical street which runs parallel to Gloucester Road. 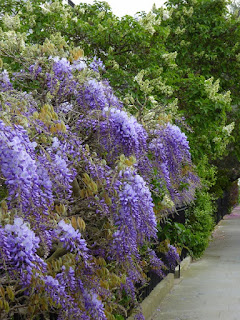 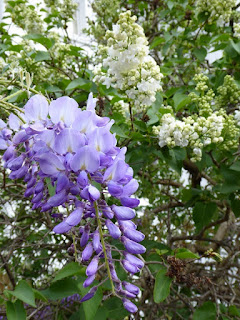 The great actress Siobhan McKenna had a one woman show called And These Be Women; one of the pieces was a conversation between Christ on the Cross and Mary his mother at the foot of the cross. I recall it was in Gaelic and she simply stood with her right arm raised - when she looked up she was Mary with her hand on the cross when she looked down she was the crucified Christ. I only wish there was a video record of that somewhere but sadly I have found nothing after several searches.

What Reproaches did they use during Veneration? I must admit after I converted to Anglo-Catholicism it was one ceremony that my Protestant mindset had problems with.

That sounds extraordinary. Recently we had an adaptation of Colm Toibin's Mary book with Fiona Shaw, but I must admit that Deborah Warner's production was over-mannered.

The Reproaches were also by Victoria (Tomas Luis de). So you converted from...? Plain Anglicanism?

I was baptisted and thought never confirmed went to our Anglican parish however when Iwa about 10 my mother had a falling out with the vicar. Next thing I knew we were Presbyterian. Hard to believe I'm sure but I was a Sunday school teacher, choir member and head of the Youth Group. Then I lapsed until I "converted" and was confirmed in the Anglo-Catholic faith. I was a sub-deacon for quite a few years and then once again became lapsed. A religious life "crowded with incident"!!

Indeed. Curious, but there are still curiouser conversions....

What a lovely, lovely post! I also love John 19:26-27 and had forgotten about it, so thank you! And the Bruckner is beautiful - I have borrowed it to post on Facebook. Charmingly enhanced by your floral photos, gorgeous as always! -- Elizabeth

Thanks, Elizabeth - spring flowering especially for a Newleaf. Happy to spread the love around, always.

How did I miss this lovely post? Well, never too late, and such a trail of treasures you've led us down here.

I think you would like the Grigorjeva - very sensitive word setting.

David: Thank you for the prompt to come back and say more about your post. The Bruckner is lovely--and was also new to me. I raced over to Spotify to see what I could find and came across what looks to be a very interesting compilation of music for passiontide that I've now cued up for a listen. I've also cued up the Dvorak Requiem--another work I didn't know existed (the more I learn, the less I know)--and look forward to listening when we come back from our walk (for Innisfree has opened early, and the day is fine). But now, for the main event, which is Grigorjeva. Magnificent! And I'm so pleased to see that the CD you mention is available, too. The video was a wonderful introduction--of course I always love being able to hear from the composer, and her comments went so much to the heart of how the piece should sound. There are, actually, only two other examples of contemporary choral musical discoveries I've made in recent times that compare to the Grigorjeva in quality. One is MacMillian's Sun Dogs, the other Anne Boyd's As I Crossed a Bridge of Dreams (to which I was introduced at the Vale of Glamorgan Festival, sung by the brilliant Ars Nova Copenhagen). A lovely performance of the latter is here

Well, enough rattling on! The music you've offered here will be my Sunday afternoon listening, with grateful thanks. Then tomorrow, it's off to NYC for a double-header opera: Monday, Der Rosenkavalier; Tuesday, The Flying Dutchman. Then back home to make final preparations for our trip.

Sun Dogs I adore, as I think you know. Both MacMillan and Grigorjeva really know how to write for choir. So does a younger composer who's an enchanting person as well as a very individual person with a real sense of drama, Cheryl Frances Hoad. I think you'll enjoy the whole disc, though you may want the 'real' Grigojeva to stand up.

And of course, now that I look back, it is you who introduced me to Sun-Dogs.

Beautiful again, I hope you had a good Easter. So nice to be in London and see the flowers in the garden of the Royal Palaces.
Here on PEI, not the mainland, it is Spring and the tulips are out thanks to our large Dutch community on the Island.