After Pelléas, Ariadne and Tito 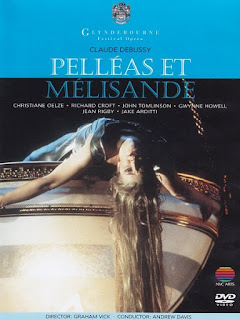 'Ah! I breathe at last!...I thought for a moment that I was going to be ill in those enormous vaults.' Following Pelléas's cue as he emerges onto a sunlit terrace after a terrifying time in the depths of the gloomy old castle, I think most of us in my Opera in Depth course at the Frontline Club were glad to get out into the sunny streets of Paddington after the last of four and a half Monday afternoon immersed in the world of Debussy's Pelléas et Mélisande. Some of us will be staying in the light for Strauss's Ariadne auf Naxos next Monday. Pelléas was hard emotional work, though. It's probably the most exquisitely refined and orchestrally ravishing operatic score ever written, but as a drama more cruel and harsh than it is soft and beautiful. 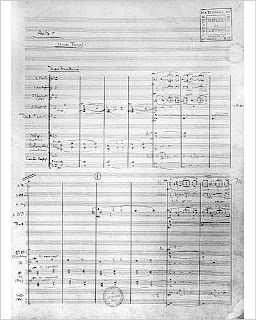 We've been aware of its multiple meanings, but above all how it functions both as the most straightforward triangle - as Richard Jones put it to me when I first met him as he was working on the ENO production, 'two men fall in love with the same woman, with disastrous results' - and as so much more, partly intimated by Arthur Symons: 'we have two innocent lovers, to whom love is guilt; we have blind vengeance, aged and helpless wisdom; we have the conflict of passions fighting in the dark, destroying what they most desire in the world'. 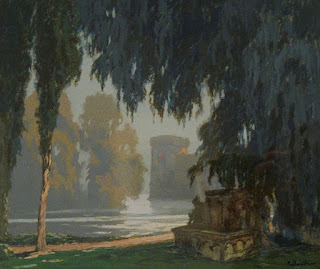 Ascribe that first to Maeterlinck's nightmarish play, following his obsession with the destruction of the young by the old. Of course Debussy completely transfigures it with his music of nature, reaching its most dreamlike, minimalist, barely-audible apogee in the scene at the grotto by the sea. But he knows how to unleash the full harshness  - at the end of Act Three and in Act Four, in the scenes of the insanely jealous Golaud's abusive cruelty to his son and wife, the musical violence is extreme. This made an interesting comparison with the pathology of the protagonist in Verdi's Otello, on which we'd spent the first five and a half weeks of the summer term - the difference being that Golaud has real cause for his jealousy, whereas Otello does not. 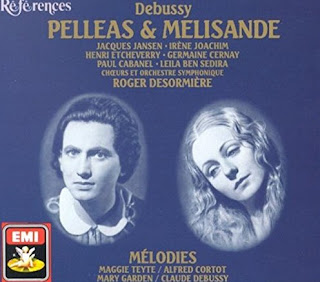 As well as snippeting sound recordings by Désormière - the classic and text-unsurpassable 1941 recording with Irène Joachim and Jacques Jansen - and by Karajan, featuring an superb José Van Dam and Frederica von Stade, we stuck for visuals with the 1999 Glyndebourne production by Graham Vick on DVD. I'm kicking myself that I never saw it at the time; apart from possibly being the most visually arresting production ever seen at the Sussex house, with its flowers under the floor, spiral staircase and peeling gold walls, the focus on nuance from John Tomlinson, Christiane Oelze and Richard Croft is ideal for video close-up. We came away devastated from the tower scene (Mélisande actually hangs backwards from a huge deco light, as you can see in the DVD cover up top) and, yesterday, from the disturbing death of Act 5, as quiet and strange as the lovers' unaccompanied 'je t'aime'/'je t'aime aussi'. 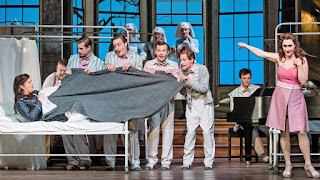 Much more to say on this, but the advertising point here is that we move on and for the next two Mondays, I've added two extra one-off classes on Strauss's Ariadne auf Naxos (24 July) and Mozart's La clemenza di Tito (31 July), tying in with the Glyndebourne productions (scene from the Ariadne opera in the 2017 revival, image by Robert Workman). Same time, 2.30pm-4.30pm, location a private house generously loaned by a friend just down the road from our usual venue. the superb Frontline Club. If you're interested in coming along - or indeed if you're interested in next season's course, which will start with La bohème, including (I hope) another visit from Richard Jones, he director of the new production due at the Royal Opera - leave a message here with your email. I won't publish it but I promise to reply.
Posted by David at 09:31

Can't agree - every number breathes that at-one-with-the-world quality which is only to be found in later Mozart. The style is post-Handel so not appropriate - and we're usually spared da capos...

Of course it's not beheaded. With Mozart, the form of most of the great arias is slow section, often with its own middle and short recap, followed by fast. Completely different and better IMO unless you're just after display.

Well of course you are right. But I still feel when listening to Tito that there is something of the earlier style of opera in the piece, which surprises anyway me when I consider that it was a latish composition. Why the Empress Leopold did not like it I cannot understand.

You're absolutely right - it is the standard opera seria form and the libretto was written in the earlier half of the 18th century. So set pieces abound and ensembles are at a minimum except in the Act 1 finale. In marked contrast to the three operas before it and Magic Flute which flanks it compositionally speaking (its overture was written last). Empress Leopold? Something of Maria Theresa lingering on in him?

It is reported that the Empress, Maria Louis of Spain and wife of the Emperor Leopold, said of Tito ( written in honour of the Emperor) that is was " una pocheria tedecsca " ( German swinishness). However it may be that this was a later invention. I have a very good impression of Leopold, a much better guy that his elder brother Joseph ( " so many notes, Herr Mozart"), and it is a pity that his reign was so short

Excellent. Now, anyone for Pelléas?

My first P&M was at Glyndebourne in 1969 conducted by John Pritchard with Ileana Cotrubas, Jacques Mars and Peter-Christoph Runge. The production had originated in 1962 conducted by Gui and Carl Ebert as producer (it was his last production for the Festival). I treasure a recording made of that '63 production. I have seen it since in Ottawa, Chicago (with an incandescent Theresa Stratas)and Rome. Even in the disastrous production in Rome - which featured a bald Melisande with a blood stain at her crotch and a gigantic rotating bisected contraceptive diaphragm as a staging platform the beauty and violence you speak of in the music has never failed to move and in some cases devastate me. How I wish I had been able to sit in on your - but then I say and think that of everyone you have ever spoken of.

Quite a history, Will. Rome sounds a little...outlandish. Devastating is the key word, I think. And we came to the conclusion that there are so many interpretations possible. J said it might work set in a madhouse, since everyone seems unbalanced in one way or another. I'd love to see the play - indeed, any Maeterlinck- to know how his peculiar language (very elementary at times, mystical at others) might work without music.

See the citation for his Nobel Prize (Wikipedia). And I like The Life of the Bee

I've just ordered up the only Maeterlinck biography in English. Fascinated to know what powered his very peculiar obsessions. The Life of the Bee is wonderful. Kupfer's ENO Pelleas had an apid giant hovering over the action.