On the Waugh path 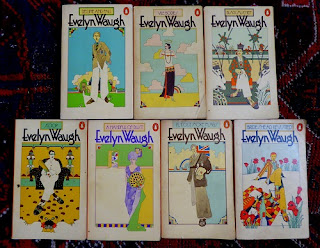 As reported here in April, the excellent recent TV adaptation of Decline and Fall turned me back to the novels of Evelyn Waugh. At university, I guess many of us brushed aside his first and its successor, Vile Bodies, as trivial if amusing; now I appreciate that there's seriousness of intent underneath, and a melancholy, vanitas vanitatum streak which peaks in the least typical of the books up to 1945, Brideshead Revisited.

That was perhaps the only slight disappointment: if you come to love the air of detachment and irony with which the novelist views his characters in all Brideshead's predecessors, the purple-prose nostalgia of the narrator, Charles Ryder, can be a little hard to take. Are we supposed to sympathise with him? I increasingly don't. 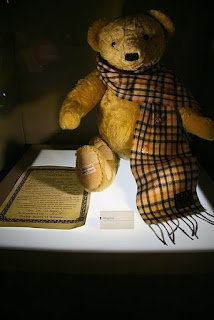 The main problem for me is how he virtually banishes the seemingly hopeless case that is his increasingly inebriated friend and (one presumes) youthful lover Sebastian and replaces him with his (Sebastian's) sister Diana. It's all summed up in a couple of remarks, viz:

'It's frightening,' Julia once said, 'to think how completely you have forgotten Sebastian.'

'He was the forerunner.'

'That's what you said in the storm, I've thought since perhaps I am only a forerunner too.'

There's certainly a symmetry in the two loves for brother and sister, but the growing interference of Catholicism can be distasteful - maybe that's the point - and the 'grace' at the end doesn't work for me. Waugh made it clear in a Preface written in 1959, and included in the old Penguin edition, that in 1943-4 he was 'gluttonous' during that time of privations for 'food and wine, for the splendours of the recent past, and for rhetorical and ornamental language, which now with a full stomach I find distasteful'. But if I don't like Charles, I imagine I wouldn't like Waugh much either. 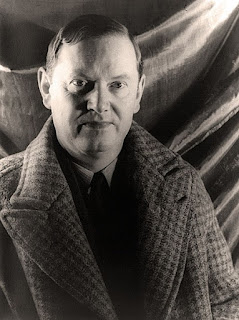 At any rate his other heroes and anti-heroes are more tantalising because so many, like Paul Pennyfeather, William Boot in Scoop - the phenomenon of the ill-equipped war correspondent is still very much with us - and certainly Tony Last in A Handful of Dust, are shadows. To summarise a famous passage in Decline and Fall, the 'mysterious disappearance' - or maybe the total absence - of their real personalities is the subject of those novels (Brenda Last is a melancholy shadow, too; you can't quite hate her until the end). Then there's the amoral Basil Seal of the dodgy but sharply observed Black Mischief, whose exploits as the superficial shine of the earlier novels vanishes with the onset of the Second World War in Put Out More Flags are laugh-out-loud territory (his escapades with the awful evacuee children in the English countryside, cheap comedy material to be sure, but it works). 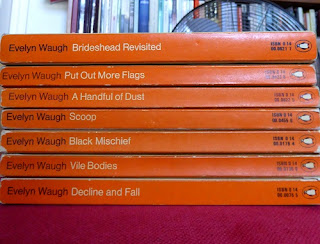 I'm glad I read or re-read the first seven novels more or less in sequence, and within a couple of months, because they do mark the passing of the brittle Twenties in the eyes of one who lived through them. And the tangential reappearances of various characters must have given Anthony Powell the cue for his A Dance to the Music of Time series, which I devoured at university - so no snobbery about light comedy in that case, then - and which I don't know if I would admire so much now (but then that impression may have been muddled by the far-too-short TV adaptation). Now it's time for a Waugh armistice; then I may re-read the famous trilogy. Certainly I must go back to the diaries which I also loved so much as a teenager. But now for something completely different.
Posted by David at 21:49

I'll be looking for Decline and Fall to arrive over here (though I'm so out of touch perhaps it has already). I've read very little Waugh (BTW your Waugh-path title and the wonderful book covers made a great hook for this post). You are, clearly, a voracious reader. I move more slowly, but have just finished an interesting, though less than fulfilling novel, The Association of Small Bombs, and am now on the look-out for another, better one.

How do you mean, 'arrive over here'? I guees it arrived shortly after publication in 1928.

I think I have a spare copy so should put in the post with the Europe Day Concert CD which has just arrived.

BTW, I thought D&F would make an excellent subject for a Gerald Barry opera - to complete a trilogy with Earnest and Alice, since Waugh's language is similarly both crisp and fantastical. GB hadn't read it, but liked the clips from the TV series he watched on YouTube. So there's hope...

David, I have the same question as Sue, so I believe I can say for us both that we wonder when, not the book, but the TV series will arrive here. Google says that it is available in the U.S. on something called Acorn TV. I have no idea what that is and am waiting for PBS to do right by us!

I have not read all of Waugh's novels, and certainly not twice(!) but have a sentimental attitude towards those I read long ago. Naturally, you had me with the image of Aloysius. I now wonder, though, whether any of his female characters are decent, let alone admirable, people. And, are all of his men self-absorbed? Fortunately, I can find novels, and well-produced adaptations of them, interesting and even instructive, without wanting to emulate the characters - otherwise, the list might be short! Did you see the film version of A Handful of Dust, and what did you think of it? Anyway, now you have me looking forward to the fleshing out of Decline and Fall, so thanks! -- Elizabeth

David: I meant the TV adaptation.

Waugh's English prose is almost the equal of Wodehouse's, though in the case of Waugh the content is quite different - in part it is the evocation of a dying world (" You can call it the death bed")and in part the books are about human life. The first of these will see a fading of the impact, the second I think will last. Wodehouse was " absolutely stunned by [Waugh's] brilliance. As a comic satirical writer he stands alone........And what a masterpiece Decline and Fall was"

Sue and Elizabeth: dense of me not to realise what you meant. And my attempt at humour may have fallen flat in the cold light of print (I thought you might have meant as an e-book for Kindle or some such, Sue). Hope it reaches you soon: those Americans with a Downton complex - not that I suggest for a moment you two are such - should especially like it.

Oh, and Elizabeth - I put up Aloysius without comment (it's apparently a 'replica' (!!) in the Seoul Teddy Museum...) About the characters, I do feel some sympathy for the male invertebrates of Decline and Fall and A Handful of Dust, and up to a point for the somewhat sketchy portrait of Sebastian. Haven't found any admirable strong women yet, though. Curious to know what his bio-novel about Empress Helena is like. Shall find out in due course.

David - you know I have a blind spot when it comes to Wodehouse. I find his whimsy too cast-adrift, whereas the melancholy take on a dying civilization in Waugh hits the spot for me. Curious to know if you've read Powell's A Dance to the Music of Time and if so how that strikes you.