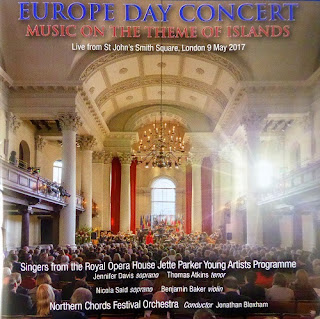 Delighted we are with it, too. Simon Weir, the producer at Classical Media, has done a grand job with sound that's very present - though it's odd to learn that St John's Smith Square has problems of dryness, since it never feels like that from where one's sitting. I think the small body of strings (5.5.3.3.2) mostly works in favour of the transparency I hear right from the start. 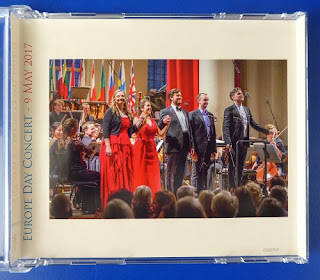 There's not much more to add to my report of the very rich and moving event, except to say that personal favourites remain the Martinů Ariane monologue, where you can really hear Nicola Said going for it (let's have another of Matt Smith's photos from the concert, below), true goosebump time, and the Sibelius Tempest numbers - I really don't know better performances of the movements in question on any other recordings, thanks partly to the exquisite wind playing and especially to Jonathan Bloxham's subtle work with clarinettists Joe Shiner and Greg Hearle in 'Song II', which may be my favourite minute of music ever. 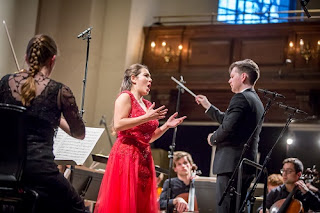 Matt Kaner's new 'Brexit' piece Stranded still sounds fabulous, of course; I hope Matt and violinist Ben Baker can make good use of it. The biggest surprise was how totally gorgeous the Pearl Fishers Leila/Nadir duet comes across on the recording; it was good in performance, but I didn't realise how good. I repeat myself, but we're ready to see Jennifer Davis's Micaëla and Thomas Atkins' Don José right now (there they are on 9 May below, at the anxious stage of the duet). They're in the Jette Parker Young Artists Summer Performance on Sunday along with the four others I heard at St Clement Danes - looking forward to that. 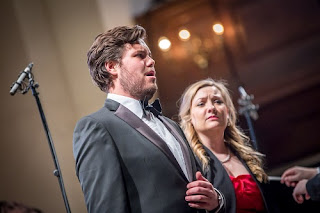 I actually took a week off from concert and opera going after the East Neuk Festival - 11 events in three and a bit days needed proper digestion, and hopefully the results on The Arts Desk, if necessarily a bit telegraphic in the overall 1500 words, do it justice. I did, though, catch a lunchtime event by serendipity. Joined our nearly nonagenarian friend Edward at Chelsea and Westminster Hospital to be there for him before and after an endoscopy.

At first I just sat in the waiting area - a pleasant space, like most in that admirably designed building - but started to fulminate at the telly: it was Trump's big-scare speech in Warsaw about defending white Western civilization, and the droning of platitudes became too much. I asked the nice receptionist if she knew when Edward would be out. '1.45' came the answer. So I popped out, bought a sandwich, came back and found a flute-and-piano recital in full swing in the ground floor atrium. 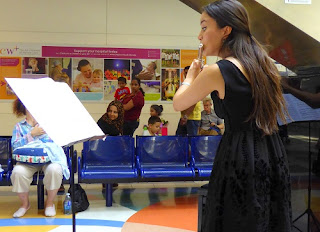 This was thanks to hospital charity CW+ and the Concordia Foundation: a concert every Thursday lunchtime. Good music, good art: this is a place that's a dream of what an NHS hospital can be like. My experiences there have all been good; a friend who was a cancer patient there had a less good time of it. Depends on the medical team in question, I guess. But anyway, the fascination of this event was watching all those who came, stayed, stood for a bit, danced around, walked past either with smiles on their faces and as if nothing was happening. 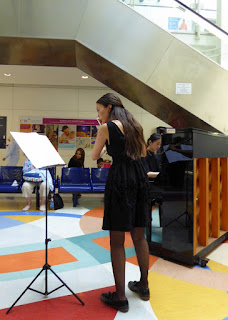 And the playing was top-notch: flautist Sophia Castillo and pianist Marie Otaka, both prizewinning student at the Royal College of Music. I caught the end of their selection from Bach's Second Orchestral Suite, a very evocative piece by Ian Clarke called Orange Dawn, a very surprising transcription of Lensky's Aria, the show-offy Monti Czardas, 'Morning' from Peer Gynt and an also surprising Carmen Fantasy put together by Francois Borne. It sent me back to the ward lighter of heart, even if I then had to sit for another hour with intermittent Sky highlights of that abysmal Trump speech.
Posted by David at 20:18

It was a stunning evening, David. Can't wait to hear the results.

Thanks - everyone I spoke to thought so. The recorded evidence does not disappoint.

Yes indeed, a wonderful evening, and I would love to hear a recordng. Tonight's first Prom took me straight back there with Igor Levit's Beethoven Piano Concerto 3, 'the most humane' of his concertos. A very European experience, followed by Lizst's arrangement of the Ode to Joy as an encore. BUT - oh no, why do we need such mindless wittering from Clemency Burton Hill and Petroc Trelawney? To be fair to Petroc his rather strident delivery isn't witless, but at the risk of being sexist Clemency is not a welcome guest at the feast. Even Tom Coult remarked that his post performance interview smacked of the post-match analysis. The worst kind of dumbing down that the Proms really doesn't need!

Long time since I watched a Prom on the telly. Radio 3 is usually more restrained in its presentation. But I know from experience that if you're invited as a speaker for the TV Prom, nuance isn't required - only positive gush. It can't all be that great, can it?

Shall listen to Harmonium with pleasure - surprised you didn't mention that as the highlight. Mrs Suthren-Lane and I were just down the road, as you know. She will have pleased you with the CD by now and I trust you're listening over breakfast.

Oh, glorious! I eagerly await my copy here. How marvelous that you were able to escape the television for a concert, but how ghastly that the television was on, and what the subject was. I really fail to understand why, particularly in medical offices, the admin thinks this is a good idea. Even if not what passes for news, it's mostly trash and interferes with quiet reading.

Yes - it was weird how the other folk sat glued and didn't react to my intemperate spluttering (though the receptionist was amused). Perhaps they were Trumpites but given the very low percentage in the UK I doubt it. To be fair it was non-stop news rather than actual trash (with Trump the two come to the same thing, don't they, but the reporting wasn't at fault). Muzak I could at least have shut out. And I had to wonder if the hospital had a deal with Sky, which I won't touch with a bargepole.

David, I was listening live to the first Prom on R3, then switched to TV iplayer and watched some of it again, so I haven't yet heard Harmonium but am looking forward to it. I really don't mind how they present them on the telly, but on R3 - ugh! I still have a cherished live Harmonium recording from many years ago on a cassette, can't remember the occasion. Could be fun doing a comparison. It's about time I digitised anything worth keeping (Lutoslawski conducting, Krystian Zimerman, birthday concerts, that sort of thing). The St John's concert sounds amazing, really good recording and not an obvious St John's sound as you say. No chance to listen through and really pay attention yet - another treat in store!

I bought a very cheap cassette-to-MP3 recorder to preserve old interviews, and the time when I recorded a lot off the radio in the early 1980s (but the quality wasn't good). Haven't got round to using it yet, nor to transferring LPs via my new turntable (but I've been using it a lot and loving the warmth of the 33 and a third).

Glad you liked the sound - the producer and engineers had to work really hard with the acoustics, not that it sounds as if reverb or anything artificial has been added. It's nice to get verdicts now from folk who couldn't make it, unlike your tribe.