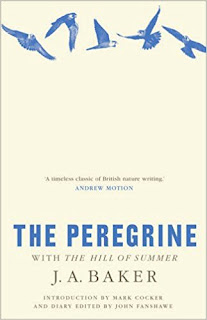 I thought Robert MacFarlane was good - he is, if often a bit self-conscious in style - only to find Roger Deakin even better. Henry David Thoreau's Walden. Or, Life in the Woods is an in-the-beginning must for environmentalists and nature lovers, its very bumptiousness part of its charm (and it has the most poetic prose chapter on spring, to end the book, that I think I've ever read). But soaring highest of all, at least of what I've now read, is J(ohn) A(lec) Baker, page after page of whose 1967 classic The Peregrine offers lyrical writing of an order I've never encountered at the same visionary pitch. At the same time this is a study with its feet firmly planted on rough soil, with an acute awareness - shared by Steinbeck in Cannery Row's description of the tide-pool - about the destructiveness and ferocity of nature in Baker's stated intention to 'make plain the bloodiness of killing'. 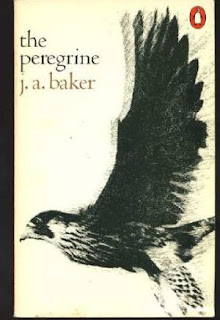 Baker lived all of his too-short life (he died in  1987 at the age of 61) in Chelmsford, Essex. As anyone who has walked rural portions, and especially estuaries, of that much-maligned county, there is as much natural wonder to be found here as anywhere, though you need to search it out. Baker's stamping ground was, as Mark Cocker writes in his introduction to the Collins edition of The Peregrine and The Hill of Summer, 'a roughly rectangular Essex patch of just 550km, which includes the Chelmer Valley from the eastern edge of Chelmsford as far west as Maldon and the confluence of the Chelmer and Blackwater Rivers', and the author wrote that 'before it is too late, I have tried to...convey the wonder of...a land to me as profuse and glorious as Africa'. 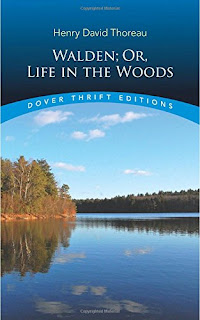 As Thoreau more bullishly puts it, and more about the inner than the near-to-hand:

What does Africa, - what does the West stand for? Is not our own interior white on the chart? black though it may prove, like the coast, when discovered. Is it the source of the Nile, or the Niger, or the Mississippi, or a North-West Passage around this continent, that we would find? Are these the problems which most concern mankind? ...Be the Mungo Park, the Lewis and Clarke and Frobisher, of your own streams and oceans; explore your own higher latitudes...Nay, be a Columbus to whole new continents and worlds within you, opening new channels, not of trade, but of though. Every man is the lord of a realm beside which the earthly empire of the Czar is but a petty state, a hummock left by the ice. Yet some can be patriotic who have no self-respect, and sacrifice the greater to the less. They love the soil which makes their graves, but have no sympathy with the spirit which may still animate their clay.

But I'm letting Thoreau steer me, in his splendidly digressive way, off course. Baker's own introduction states how 'in my diary of a single winter, I have tried to preserve a unity, binding together the bird, the watcher, and the place that holds them both' - which he does by occasionally showing us how the watcher identifies with the bird. 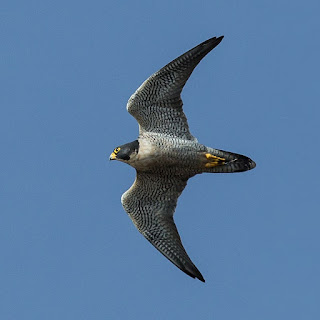 But the first person is sparely used, never over-indulgent as it is in Thoreau, and the prose manages to be both rich and spare at the same time. Descriptions of the peregrine's soaring and then his stoops, those giddying plunges at speed, intoxicate the reader as they clearly did Baker. Daily descriptions of the scene have a physical force, partly through the Shakespearean use of vivid verb, some of them created or made intransitive, as here, all of which I recognise:

The sky peeled white in the north-west gale, leaving the eye no refuge from the sun's cold glare. Distance was blown away, and every tree and church and farm came closer, scoured of its skin of haze...New horizons stood up bleached and stark, plucked out by the cold talons of the gale...An iridescence of ducks' heads smouldered in foaming blue water...

In a freezing January, one of the coldest, and having killed a half-dead, bleeding woodpigeon, the writer records:

A day of blood; of sun, snow and blood. Blood-red! What a useless adjective that is. Nothing is as beautifully, richly red as flowing blood on snow. It is strange that the eye can love what mind and body hate. 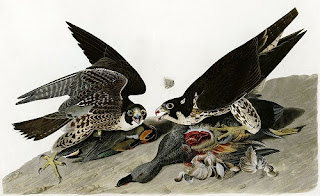 The kill itself is brutal - here a soaring and a stoop, both thrillingly described in the previous paragraph, end in the final action:

And for the partridge there was the sun suddenly shut out, the foul flailing blackness spreading wings above, the roar ceasing, the blazing knives driving in, the terrible white face descending - hooked and masked and horned and staring-eyed. And then the back-breaking agony beginning, and snow scattering from scuffling feet, and snow filling the bill's wide silence scream, till the merciful needle of the hawk's beak notched in the straining neck and jerked the shuddering life away.

And for the watcher, sheltered for centuries from such hunger and such rage, such agony and such fear, there is the memory of that sabring fall from the sky, and the vicarious joy of the guiltless hunter who kills only through his familiar, and wills him to be fed. 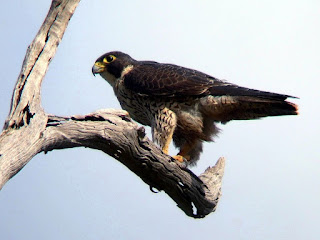 Then there's this, of a close encounter with a tiercel perched on a post five yards away:

He looked round as I stopped, and we both went rigid with the shock of surprise. Light drained away, and the hawk was a dark shape against white sky. His sunken, owl-like head looked dazed and stupid as it turned and bobbed and jerked about. He was dazzled by this sudden confrontation with the devil. The dark moustachial lobes were livid and bristling on the pale Siberian face peering from thick furs. The large bill opened and closed in a silent hiss of alarm, puffing out breath into the cold air. Hesitant, incredulous, outraged, he just squatted on his post and gasped, Then the splintered fragments of his mind sprang together, and he flew very fast and softly away, rolling and twisting from side to side in steepling banks and curves as though avoiding gunshot.

Three pages later there's a no less compelling passage about a meeting with a tawny owl in a wood just before sunset. Other birds appear and are noted, though unfortunately many of them are the peregrine's prey, seen either before the attack or as kill to tell Baker where his main object has been. Their vocalisings are vividly captured - 'the squelching call of snipe', the scolding of blackbirds' alarms, robins' song 'clear as spring water'. 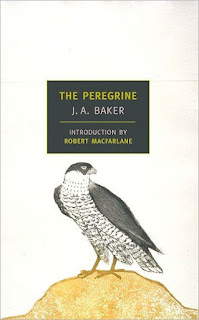 But I realise that I could go on excerpting passages for a lot longer, glorying in the language as I take pleasure in typing it out and hoping something will rub off. Just read it. And re-read. I'll go even further than my title by declaring that it's a towering masterpiece by any literary standards and has gone on to my all-time-favourites list. I'm saving The Hill of Summer for a time closer to what it describes, though I realise it is probably even better to savour the opposite of what one's going through. Which, these past few days, has felt like the bleak heart of winter. In the meantime, here's the only reasonably close photo I've ever managed to take of a bird of prey - a mere buzzard, I fear, but it was splendid to see this summer in the well (but not over) maintained common near Jill's place in Lower Southrepps. 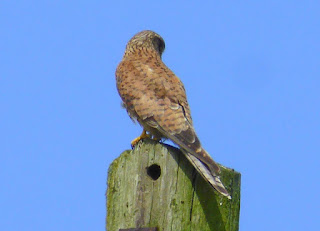 UPDATE: I realise I let the centenary day of Finnish independence pass unremarked, though I did go to the superlative celebratory concert from Sakari Oramo and the BBC Symphony Orchestra at the Barbican last night - all Sibelius, of course, part of the team's symphonies cycle - and reviewed it this morning on The Arts Desk. Was expecting an encore after the bleak, abrupt ending of the First Symphony, but there wasn't one. This bird-related beauty was Jukka-Pekka Saraste's choice of encore to mark the composer's own 150th anniversary in 2015. Here it is from Leif Segerstam and the Danish National Radio Orchestra:

The excerpts have wonderful descriptions David. I'd never heard of it before. Thank you.

Delighted that you warmed to them, Olivia. I could have gone on excerpting, but it's a short book so better to order it up and give copies to friends...