A year in books 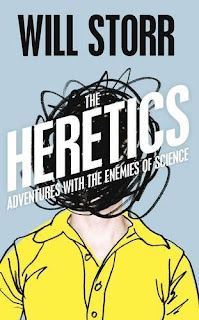 Certainly the above was the biggest surprise of my reading in 2017, with a more profound impact than I could have anticipated. I picked it up in a remainder bookshop for £1, thinking to be entertained and to have my prejudices confirmed by Storr's meetings with climate-change deniers, religious extremists and UFO spotters. Certainly there are some horrible people within these pages, chiefly the, shall we say, somewhat partial 'historian' David Irving, whom Storr bravely joins on a tour of concentration camps and Nazi sites around Germany. But while the author claims that 'as a journalist, my knowledge is broad but shallow', he does his research and is far too self-critical to allow simple journalistic blacks and whites.

What makes this book more than a collection of essays about the variously weird and wrong is the way that Storr examines one set of chapters before moving on, always opening up the bigger picture. The life-changer for me, though no doubt much in it is nothing new to scientists, is the chapter on the human brain, its unreliability and its wonderful deviousness. 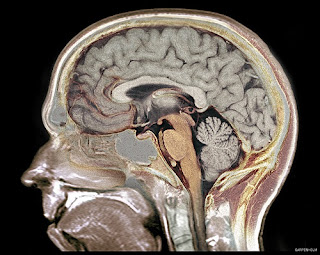 Storr spends as much time with the fact-conscious Skeptics and is wary of their 'binary, dismissive thinking', especially when it comes to a mysterious scratching illness, where he thinks a combination of mental, clinical and environmental causes may be involved. Later there's an even more valuable observation:

I used to imagine that our biases and delusions existed on a layer above a solid and clear-sighted base. Beneath your mistakes, I thought, is your human nature, which is rational and immovable, and seeks only truth. If you came to suspect that you were in error, you could easily work your way back to sense. What I now know is that there is no solid base. The machine by which we experience the world is the thing that becomes distorted. And so it is impossible to watch ourselves falling into fallacy, We can be lost without knowing we are lost. And usually, we are.

This is a wise guide at a time when we are all prone to judgement - and, I think, partly rightly so when it comes to aspects of Horror Clown behaviour on both sides of the Atlantic (what a relief it's been, by the way, to put all that aside very consciously over this interstitial period). 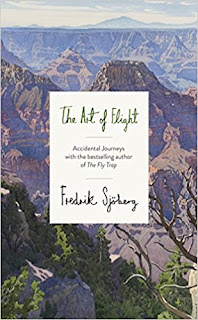 I wrote earlier in the year about another brilliant piece of writing in which the personality of the author is subtly interwoven with his subject, Fredrik Sjöberg's The Fly Trap. Since then I've read the two sequels in what turns out to be a trilogy about Swedish maverick adventurers, both in the same volume, The Art of Flight. The semi-biography of that title deals with watercolourist of the Grand Canyon Gunnar Mauritz Wildfors, while The Raisin King is zoologist Gustav Eisen, perhaps the most extraordinary of the three men in his indomitable ability to be born again in another field when disaster strikes; after the 1906 San Francisco earthquake which destroyed his natural history collection, he set off in various directions, the most moving of which was his timely salvation of the world's biggest trees by setting up the Sequoia National Park (made me tearful, perhaps, because of the terrible negation of all that the Moron-in-Chief is trying to set into operation right now).  I do wish the text was punctuated, as in W G Sebald's similarly discursive books, with photos like the one of Eisen below; sadly none is included. 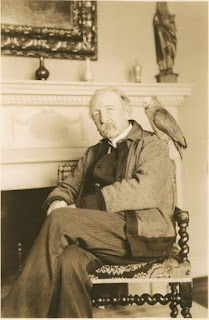 As Sjöberg puts it, Eisen 'sought happiness - or meaning, if you like - by repeating one and the same project over and over again but in different forms'. Plenty of other figures are wheeled in and out of the narrative - there's another side of Darwin revealed which makes me love the man more than ever, so pisseur A. N. Wilson can take his new 'biography' and stuff it where the sun don't shine - and Sjöberg acknowledges in himself, too, the embodiment of how 'freedom starts when we take a step to one side and, if only for a moment, do something that has no purpose beyond itself, something that is not done in vain pursuit of respect, appreciation, power, money, love, fame or honour'.

That's what partly makes my two great nature books of the year, J. A. Baker's The Peregrine and Nan Shepherd's The Living Mountain, so ineffably wonderful (Thoreau's Walden comes a close third, though we must doff caps to the father of the ecologically-aware genre). I believe there's also the pure calling of art about A. L. Kennedy's Serious Sweet. Having met the person at an inspiring lecture and walking to the tube with her afterwards, I know she's an altruistic person. And that part of her must be in the self-doubting, dual protagonists - adorable yet still at times maddening - of this most tender love story, which I took up after the talk. What Ulysses does for Dublin, this is to contemporary London, with its 24 hour trajectory - leaving the present for the recent past provides a lovely twist about halfway through - and its stream of consciousness from the two main characters. 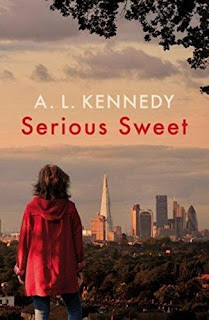 Very much on the same, highest level is Alan Hollinghurst's The Sparsholt Affair - a return to unforgettable form after The Stranger's Child, which I enjoyed but can remember little about, whereas this one's branded on the memory. It was one of five books I got to review this year for The Arts Desk; the others were Anne Applebaum's Red Famine (not quite as unremittingly grim as the subject of the Ukrainian famine(s) might suggest, since there's historical context and hope for the future), Kissin's brief but telling Memories and Reflections, the latest Icelandic thriller from Yrsa Sigurdardóttir and Eisenstein on Paper, a lavish Thames and Hudson tome featuring many drawings by the master of film not previously seen before. 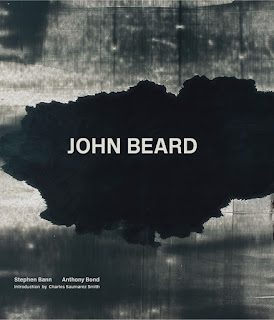 The other treasured visual delight of the year is a beautifully designed monograph on the Welsh-born, Sydney- and London-based artist John Beard, which we were gifted on a visit to his Greenwich studio to see his epic diptych response to Gericault's The Raft of the Medusa - that will need an entry to itself.

Otherwise, on the blog, it's been all about the first discovery of the year, the great Hungarian (and European, and world-class) writer Péter Esterházy, and his historical masterpiece Celestial Harmonies, a biography of the fascinating figure behind the genesis of Der Rosenkavalier, Count Harry Kessler, a journey partly retraced through the novels of Evelyn Waugh starting (of course) with Decline and Fall and going up to Put Out More Flags, with a jump ahead to The Ordeal of Gilbert Pinfold to complement a portrait of this multifarious gent by Philip Eade, and embarking on the masterpiece of Estonian literature, Jaan Kross's Between Three Plagues trilogy. 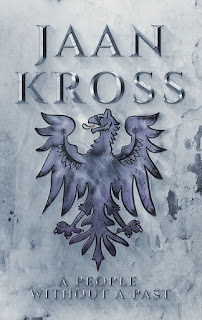 The second translated volume of this magnificent equivalent to Hilary Mantel's Wolf Hall appeared this year, and I'm halfway through it now. Here's to the completion of Merike Lepasaar Beecher's labour of love in 2018. In the meantime do have a look at the choices my team and I on The Arts Desk made in the spheres of opera and classical concerts - quite a healthy list, I think you'll agree (update: Boyd Tonkin's marshalling of our book bests is now up and running - the Applebaum and Hollinghurst are there, as I should have hoped). CD choices will have to wait until 18 January, when the front-runners for the BBC Music Magazine Awards are announced - I'll then be able to reveal what I think should also have made the grade, and which of the nominations I'd like especially to celebrate.
Posted by David at 13:24

An intriguing list, for sure, and an interesting complement to my efforts today to cull books from our city apartment shelves to make way for CDs. I’m not sure I accomplished much, but it certainly kept me busy. As for actual reading, for me it’s light mysteries at the moment, though I did “graduate” to a fairly interesting novel, “Do Not Say We Have Nothing,” by Madeleine Thien, short listed for the Man Booker, if I recall correctly.

Culling books for CDs? Horreur! Unfortunately both in our tiny flat have spilled out from the shelves (double stacked) on to the floor, and it's mostly my fault. Shall check out the Thien. We have the winner sitting here waiting to be read.

Of course the great irony of book culling is that I go to the local independent bookstore and get a store credit for books returned that they can resell. So you know what that means (more books).

Much the same happens to me when I take the occasional pile of books to the Amnesty Shop in Hammersmith - too well stocked not to pick up a few more when I allow myself to browse. My latest addiction is a return to vinyl, because rhe charity shops down the North End Road in Fulham seem to be getting interesting stuff in, £1 or £2 a shot. J is going up the wall while the books and LPs and CDs mount up on the floor.

This is in response to your comments about "Heretics" (which I have not read).

It brought to mind that scene in "The History Boys" where - after recommending the Oxbridge aspirants read Rudyard Kipling not Wilfred Owen and watch "Carry On" films - the new young renegade teacher Irwin declares that, “History nowadays is not a matter of conviction. It’s a performance. It’s entertainment.”

I read this as meaning that for academic recognition it's more important to be controversial and make a splash than it is to be conventional and right.

And to you, Josie. I guess the 'false' lead comes from TV and some of the print media. The age of sensationalism. Maybe 2018 will see the fight back continue - sometimes things have to reach rock bottom, and boy, did they do that in 2016/17. But even when people see the terrible consequences in your Horror Clown and our clutch, they still cling to the irrational.