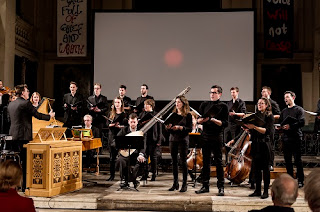 A great idea, in principle: invite in a radical and respected curator, André de Ridder, whose conducting of Prokofiev's The Gambler at Grange Park impressed me so much on a first visit there, and whose adventures in contemporary music have been consistent ever since; combine the old and the new in most programmes; make each event an epic. And, of course, avoid the usual Christmas fare of previous years. Of the opening three-parter, I could only make the first third, in itself a generous hour-and-a-half, before dashing off to the Royal Opera's Cav and Pag. That put an Arts Desk review out of bounds, so I report belatedly on what I witnessed last Saturday here on the blog.

The launch of the Spitalfields Music Festival 2017 (all images here by Robin Savage for the Festival) was in every detail worthy of respect, but a little crepuscular (as a punter said in the Music Discount Centre when I worked there many moons ago, of music from Wagner's Ring arranged for the eight Bayreuth horns). Two of the three works receiving UK or world premieres were minimal to the point of dematerialising: perfect for a late-night concert in the summer, when the body is relaxed enough to go into meditative mood, less so for lugubrious Shoreditch Church 9as immortalised in the wonderful Rev.) on the gloomiest of December days. Much as I love Anna Thorvaldsdóttir's haunting orchestral pieces, Shades of Silence hardy feels like more than a tentative improvisation (it was composed for the Icelandic period-instrument contemporary group I heard in Tallinn Music Days 2016, and so it fitted David Bates and players of La Nuova Musica well). 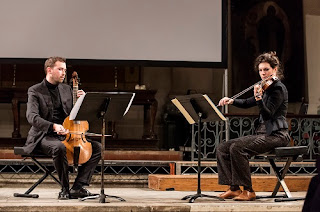 Much more effective, as I'd have been able to judge more fully had I been sitting comfortably and not with a crick in my neck, was Jocelyn Campbell's THEFT, a very subtle meditation on fragments of Monteverdi madrigals. Beautifully maintained on the cusp of silence by violinist Maya Kaddish and viola da gamba player Gavin Kibble (pictured above), it was true to the composer's definition (Thorvaldsdóttir's title was advertisement enough, too): 'I want the pieces to feel somewhat vacant, still containing much of the beauty of Monteverdi's writing but with none of the sense of progression, and heard somewhat faintly as if from a distance and with elements of soft disruption'. 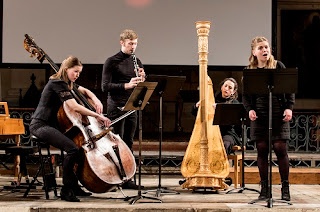 Dynamic at last, by way of much-needed contrast, was Josephine Stephenson's Between the war and you, a song cycle the words of which were not always audible, nor the tones consistently projected, from The Hermes Experiment's soprano Héloïse Werner. The quartet's admirable aim to commission work for the rare combination of voice, clarinet, double bass and harp (all four musicians pictured above) remains impressive, though, and harpist Anne Denholm wove consistent magic. 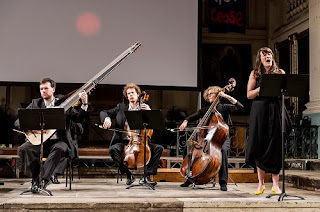 The framing madrigals both astounded me (through the course of the evening there were five scheduled, all from the radical Book Eight - I was sorry to miss Ben Johnson in Il Combattimento). I confess I've never heard 'Or che'Ciel e la terra e'l Vento tace' live before - wonderful text, spellbinding start, queasy harmonies. Radical indeed. This is up there with the weirdest of Gesualdo, and all in the cause of creating a mini piece of music theatre. Even more so 'Lamento della Ninfa', with Katherine Manley (pictured above with three musicians from La Nuova Musica) realising the full force of the girl's heart-tugging plaint. Excellent work, too, from The Erebus Ensemble, a group of singers for once as fair of face as voice. Men only, of course, alongside Manley in 'Or che'Ciel'. 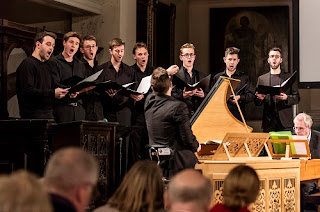 Wish I could go on the Schumann ramble around Spitalfields' Huguenot houses tonight - Dichterliebe distributed and, it seems, in some cases reworked; the great Uri Caine is among the range of performers. But since Sakari Oramo's unsurpassable Independence Centenary Sibelius has left me on a high, and Salonen did a wonderful job on the colour in the Four Lemminkäinen Legends the next evening, I have to go tonight to hear what the first as conductor makes of the second as composer. And, I know it's the obvious choice, but I only just watched Oramo's Last Night of the Proms performance of Finlandia, with choir (though it's the revised standard, otherwise, rather than the original with its hair-raising apotheosis, which we heard on Wednesday). Gave me goosebumps and brought a tear to the eye. So good to see so many of my pals in the BBCSO in close-up, too.


UPDATE (13/12): Helen Wallace has done the honours for the Spitalfields Festival on The Arts Desk, catching the final special event, Schumann Street, and making me wish I could have gone. I don't regret what I did plump for - Oramo and the BBC Symphony Orchestra making a brilliant success of four works by Salonen at the end of the Barbican 'Total Immersion' day.
Posted by David at 15:47

Applause for any attempt to expand on typical Christmas-time fare, even if not wholly successful. Over here an interesting development is that David Lang's little match girl passion has become a holiday time staple at the Metropolitan Museum of Art. I went to the inaugural year performance and am so glad to see it continues on, though I won't be able to join in this time around. Lang is offering a twist on the music this year, too: "the audience is the congregation and is invited to participate in the performance, contributing interstitial hymns and songs that are familiar to all, and that bind us as a community." Have just listened to the Finlandia video, too. A moving performance, reminding me that this perhaps over-familiar work can nonetheless be made new in the proper hands.

Well, it was not so much to expand as to ignore (they've had some good choral groups in the past with far from conventional seasonal fare). The Lang is magical - I heard it at the East Neuk Festival from Paul Hillier's Theatre of Voices. Shame the audience then was so small. Pleased it has attained well-deserved popularity.

Sakari has just gone and done it again - an electrifying four-work tribute to his fellow Finn Esa-Pekka Salonen as composer (wish I could have steeled myself for more in the BBC's Total Immersion day, but one needs some time away). Such lively, sensual scores, brilliantly done - the Komsi twins (Anu is Mrs Oramo) make Wing on Wing a piece unimaginable without their contribution, though it's very fine in its own right. Have to write it up for tomorrow.

I've not, I'm ashamed to say, spent much time with Salonen's compositions, though I've enjoyed what I've heard. You remind me to pay better attention. I've cued up Wing on Wing and am listening now.

The concert will be broadcast on 3 January - seems like a long time to wait, but that recording of Wing on Wing is a good one and does feature the phenomenal Komsis.