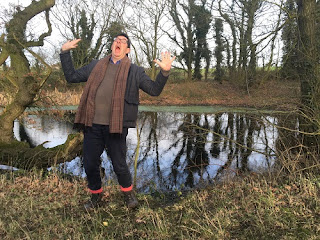 For the second time this year, in the depth of winter rather than the height of summer, we passed a dark place of legend on our way from Southrepps to the North Norfolk Coast, going on this time from Overstrand to Cromer to catch what turned out to be the most enjoyable fireworks display I've encountered, not least because of its circumstantial spirit. Of course we'd connected the two points in reverse, via a much bigger loop, on our 2015 Norfolk Churches Walk.

Monday was a brief interlude of sun between a general drama of what my godson used to call (aged five) 'horrifying wind and rain'. The eve had been spent travelling, not too painfully, by tube, coach and train to Norwich to visit our companion Cal's friend Gail in the cathedral close. We headed for Evensong, which turned out to be evening prayers, as I'd expected - 15 minutes of liturgy which at least gave time to find where my favourite roof boss from numerous cards I've sent was actually located - in the Choir. Noah's ark, of course. Gazed upwards at this while a potentially jubilant psalm and the Mag, Nunc and Creed were all droned rather joylessly. 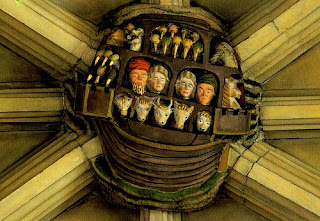 Not my photo, but this one, of the Green Man I always salute in the cloisters, is - albeit taken in the summer. 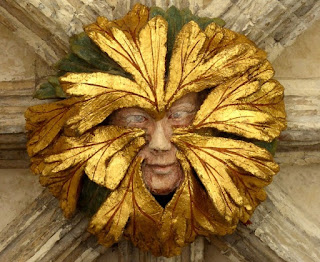 For once I left my camera behind, so I was dependent on Cally for a few images. None to post of our jolly time eating and chatting at the party held by Kate and Fairless in the Old Rectory up the hill, but a few of our NYD walk. The plan for which evolved nicely between the four of us: why not head for the pub in Southrepps proper, 10 minutes up the hill - where they squeezed us in for fish and chips between folk celebrating the New Year more lavishly - and then press on, ending up in Cromer so that we could take the train back to Gunton?

Which is what we did. The green lanes and quiet roads between Southrepps and the sea, a secluded zone embracing a valley and a very lovely wood, are already ones I dream about. So Shrieking Pit shouldn't be seen as too much of a blight - in fact on both occasions I never found it threatening, though the overhanging oak on the path side and the trees casting black reflections opposite are atmospheric both in August 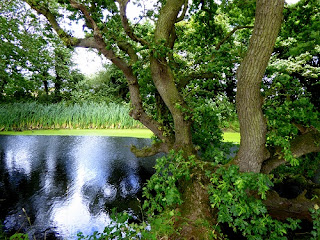 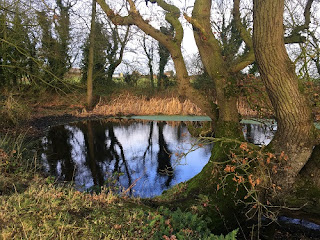 The legend is proclaimed on a nearby board, told in colourful language (you can imagine a Northrepps local historian having fun), though it seems in many respects quite specific.The year was 1782, the fatal romance the one between an 18-year-old village beauty (was she really called Esmeralda?) and a feckless farmer who was told to stay away and cheerfully obeyed. One night by full moon our doomed heroine wandered along Sandy Lane, thought she saw the reflection of her lover in the dark waters and threw herself in, uttering three piercing shrieks which woke the village before she drowned. At midnight every 24 February you may hear them again...

We hit Overstrand in time for tea (needless to say our favourite shack is shut - crab and lobsters are not in season), then struck out along the cliffs (yes, Norfolk cliffs) towards Cromer. The grey pall that had spread in late afternoon looked about to lift with the sunset in the distance at the lighthouse, 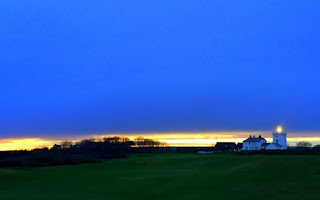 and as you can see from the film of the 5pm fireworks, taken from a drone and quickly up on the Eastern Daily News website, it did: late blue skies are apparent here. Probably best with the sound turned off; one of the nice things about it was the absence of pumping loudspeakered music which had made a 5 November effort in a London Square such an endurance test. Here people were remarkably quiet; we were the only ones in our zone going 'ooh' and 'aah'.


The display could hardly have been better choregraphed, but just as memorable was the buzz in town - most shops open, mulled wine and a barrel organ outside St Peter and St Paul (so high is the tower that Cal's shot couldn't quite squeeze it all in). 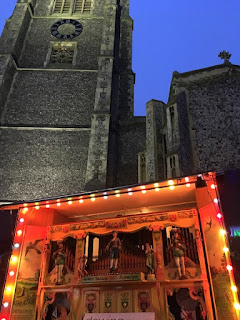 Inside, the church was alive with folk buying refreshments and consuming them in the pews while big screens showed images of last year's fireworks. Here's one future for our ailing ecclesiastical buildings - they've got to be more welcoming, more open to social use. Fortunately there was nothing as lavish as a livescreening; any of the 10,000 folk who flocked into town could get a good view of the pyrotechnics shooting up from the pier. And the packed train journey back (for us only 10 minutes to Gunton) was jolly good-humoured too. Just what a community event ought to be.

Our 2 January was good, too - a walk along the beach from Mundesley some of the way to Happisburgh, where we started last September's churches walk, the light this time out at sea and giving way to prospective rain clouds just as we headed back, as this photo by Cally reveals. 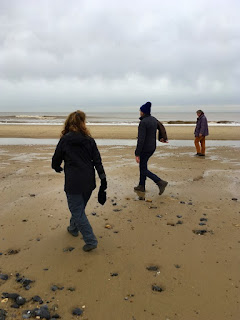 A wet afternoon was spent cosily back at the cottage before we took the train to Norwich, and on to London. Needless to say we didn't have the courage for a New Year dip in the North Sea. Maybe at the start of 2019...
Posted by David at 09:34

The photo of you by Shrieking Pit should have sounds effects too, David!

Think of it as a silent scream, Olivia...

This all sounds so very nice as a way to say farewell to the year just gone and bring in the new. And your head photo is beyond price!

In other words, there's a price on that head - the sectioners are coming after me now...

I'm not sure which is more disturbing that rather spooky Green Man or the gentleman about to be attacked by the creature from the Black Lagoon in the lead photo. Thank you for the New Year's Day walk. And all the best to you both in the New Year.

That is no gentleman... Though I am told I resemble something from The League of Gentlemen, a comedy series which actually mean the opposite when it comes to the inhabitants of Royston Vasey ('you're not from around here, are you?')

Now, can we have just a little bit of your weather? It doesn't seem right without a bit of snowy hardship... Likewise to you both.

Well aside from the fact that you are gentleman I see no resemblance! Love that show - as quirky and bizarre as it is.

Ummm - well, that's maybe a bit too far. I loved -12 in snowy Moscow, but it did mean one couldn't walk outside for more than a quarter of an hour.