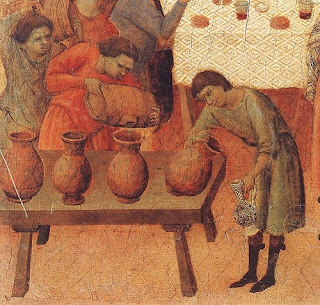 Having got the long-festering cri de coeur of the previous entry off my chest (forgive the mixed topography), let's turn the water into wine by backtracking (or Bachtracking) to Wedding at Cana day (detail above from Duccio; below, Tintoretto's version). Last Sunday's Bach cantata looks from the numbering like it might be an early one, but it continues the strain I've been finding especially wonderful in the new works for the Leipzig year of 1725.

Like BWVs 123 and 124, for Epiphany and the first Sunday thereafter, 'Ach Gott, wie manches Herzeleid' begins with  a choral movements offering heavenly roles for oboe(s) d'amore. And maybe it's only because I heard this one recently that I think it the most amazing of all. Maze-y, too; though the cantus firmus of the basses is doubled with trombone, what goes on above and around includes some of Bach's most giddying harmonic progressions. I'd call it gorgeous and sensual, though it's essentially there to underline the 'deep affliction' and 'sorrow' out of which mankind must struggle. Nevertheless the key is that bright A major which will return in the duet of soprano and alto before the final chorale (Gardiner calls that the 'most winning music' of the cantata, but I disagree again - it's chaste compared to the opening number, for all the dancing vigour of a typical upper-voices duet, and the oboes d'amore double the violin line). 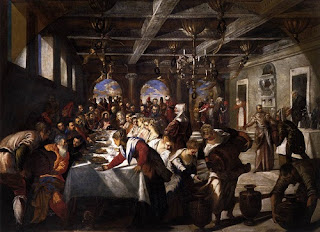 The water which must be turned into wine - Bach doesn't even make a passing reference in this cantata for the day of the Cana reading - is there, in complex form, in the recitatives and the bass aria, deliberately uneasy in its writing, with plenty of minor seconds and accents on 'angst' and 'pein'. It's so beautifully negotiated by the finest bass-baritone on Rilling's set, Philippe Huttenlocher, whom I also remember as an excellent Papageno. Though I'm equally happy to visit Gardiner's set now for Gerald Finley. 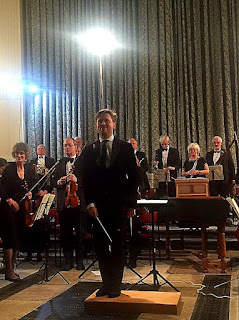 More revolutionary, if not necessarily greater, is another No. 3, Beethoven's 'Eroica' Symphony. I joke with my young pal Jonathan Bloxham that I'm collecting his Beethoven cycle; 6 and 7 he conducted with shining graduates, while this excellent concert in the beautifully situated church of St Mary-at-Hill down Lovat Lane close to the Monument was with the hard-working mostly amateur players of the Hertfordshire Chamber Orchestra. 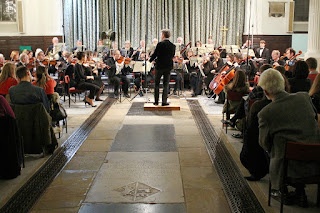 Still, he got the same energy levels, powerful accents - those repeated chords in the first movement I've never found more impressive -  and some fine phrasing, while the general approach is one I like best, fast-moving but never rushed. What's interesting is where the challenges lie for amateurs - all those pattery string notes in the scherzo, the constant chatter of the finale, which meant the first half of the symphony, the 'heroic' side, was better than the second. But it was all good. 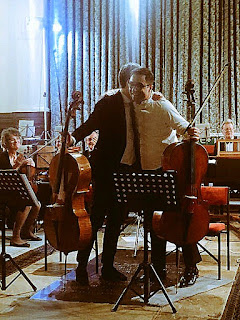 Fabulous, too, to hear Jonathan as cellist-conductor duetting with his confrere at the Yehudi Menuhin School and the Guildhall Michael Petrov in Vivaldi's G minor Concerto for two cellos (amazing finale, sounds like syncopated Elgar). Michael, who came here from Bulgaria as a teenager and seems to me to have unaccented English, has a natural projection and golden sound which bode well for his appearance at what may be the last Europe Day Concert on 9 May - Bulgaria has just taken up the Presidency of the European Council (and the first and third photos were taken by Jonathan's assistant Dorian Todorov, another Bulgarian and forging a parallel career as conductor). Full steam ahead now. 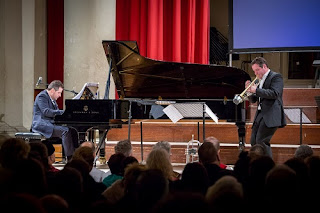 Brilliant Bulgarians marked the new Presidency of the European Council, also at St John's Smith Square, on 9 January.  Mastery in any sphere is to be applauded, and though I'm not sure I would sit through more than about 45 minutes of a jazz duo like the Wladigeroff Brothers, I found the sound if not always the substance (the compositions were mostly theirs) compelling - not least because St John's, from the back row at least, turns out to be a fabulous acoustic not just for piano but also trumpet. 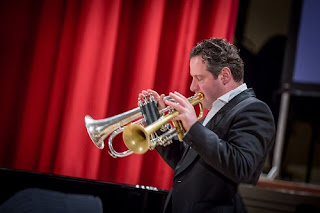 Scions of a distinguished composing family - grandfather Pancho is a big figure in Bulgaria - Alexander and Konstantin aren't just brothers; they're identical twins, and the statement that music in their blood isn't just an empty cliche. There were some stunning novelty moments; Alexander at several points played two trumpets at once, in Roma-style thirds (pictured above in the second of three photos by Jamie Smith). The range of 'horns', too, made for some surprising changes of timbre, along with some splendid forays into 5/4 and 7/8 time. 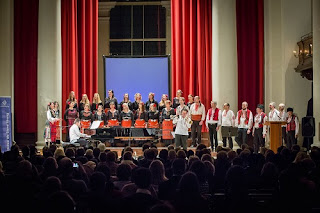 Even so, it was just as well that they were offset by the London Bulgarian Choir. An amateur group, its women have been trained by the vivacious Dessislava Stefanova to sing in that open manner familiar in many eastern folk choirs (I missed the throat singing at the beginning). Brave of them and the Wladigeroff Brothers to try their own, poppy version of the Ode to Joy sung in three languages, but the musical highlight of European co-operation for me was one on film, Swiss animation brilliantly timed to a very lively number.


Meanwhile, BWV 3 seems to be one of the few from the Rilling cantatas series on YouTube. I see from the last time I tried to embed performances that many eventually vanish. And I do recommend that you buy the big 71-CD box. But this will show you why I like the interpretations so much.