Epiphany today brings Casper, Balthazar and Melchior, though not in the Bach cantata for the day (but here they are in Dürer's Adoration of the Magi anyway), 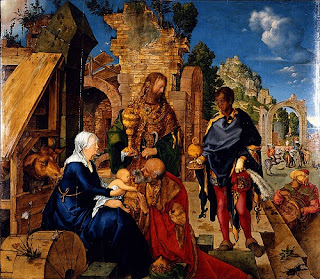 while on Monday in the first of this term's Opera in Depth course classes we embark on a four-year journey through Wagner's Ring, starting in the depths of the Rhine with Woglinde, Wellgunde and Flosshilde (pictured here by Arthur Rackham teasing Alberich). 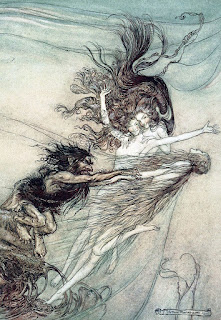 Cantata first. This time in 2013, on my first attempted Bach cantatas journey, it was the resplendent BWV 65, 'Sie werden aus Saba alle kommen', decking out the arrival of the kings with the panoply of strings, two oboes, two oboi da caccia and two recorders. Clearly Bach wanted to do something completely different for the following year in Leipzig, 1725. BWV 123, 'Liebster Immanuel, Herzog der Frommen' continues at its heart two deeply expressive arias - as in BWV 65, also for tenor and bass. The tenor's expressively emphatic  refusal to be daunted by the 'cruel journey of the cross' is  underlined by two oboi d'amore (such a different sound from the caccia variety, for inwardness, of course). 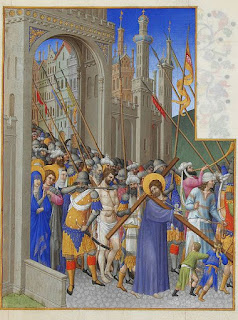 I don't for once buy John Eliot Gardiner's description of the bass's 'Lass, o Welt, mich aus Verachtung' as 'one of the loneliest arias Bach ever wrote' - how can it be when the flute hovers above the voice and the continuo line, and the major key prevails? Admittedly the text of the outer sections is bleak, and there's a plaintive cadenza in one of the settings of the word 'Einsamkeit', 'loneliness'. The opening chorus is in the dominating minor, but in a lilting 9/8 with pastoral trills and grace notes for the wind, and the concluding chorale, in another flowing metre, ends piano. Another treasure at the highest level.

So looking forward to my second Ring journey in the 28 years I've been taking an opera appreciation course. Our Rheingold half of term - the second half is devoted to Janacek's From the House of the Dead to tie in with the new Royal Opera production, now conducted by regular Opera in Depth visitor Mark Wigglesworth - links with Vladimir Jurowski's four-year adventure at the Royal Festival Hall. Das Rheingold is on 27 January; predictably, tickets are like gold dust. Singing Alberich for the first time is Robert Hayward, who came to the Frontline Club at the end of last term to talk to us not only about his Wagner roles but also - since we had just brought it to an end after five weeks which confirmed for me that it's even more astounding than I used to think - about Musorgsky's Khovanshchina. Last autumn Robert sang the role of Ivan Khovansky in the revival of David Poutney's Welsh National Opera production (pictured above by Clive Barda for WNO shortly before the prince-in-decline is assassinated. He was also very nearly in the superlative Prom performance conducted, and never better, by Semyon Bychkov).

Robert also portrayed the Walküre Wotan in Opera North's semi-staged Ring, as involved and moving a performance of that killer role as any I've seen. 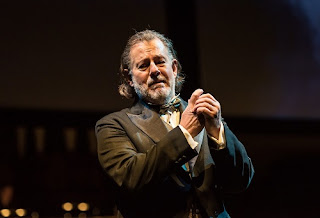 He says it will be interesting to find the humanity in Alberich, as he has also done with Ivan Khovansky and Scarpia, a role which he says could happily sing in three runs a year for total contentment.

Here he is with me at the Frontline - should have got a student to snap us spontaneously while we were in conversation. But you get the idea, that he's a very affable, modest and down-to-earth person. Extraordinary that he started out as a counter-tenor - he is going lower, which is to say higher, by the year. 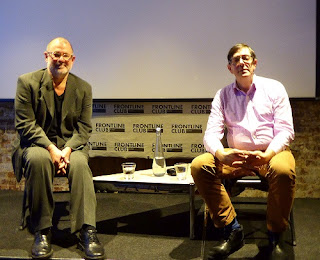 You can see him in the Barbican performance of Bartok's Bluebeard's Castle with Rinat Shaham and the National Youth Orchestra conducted by Mark Elder tomorrow night. Here's what Robert Beale thought of yesterday evening's Manchester performance on The Arts Desk. Meanwhile, if you're willing or able to come to this term's Opera in Depth, just leave me a message here with your email - I won't publish it but I promise to respond. Further details here in The Wagnerian (my own flyer is rather different). 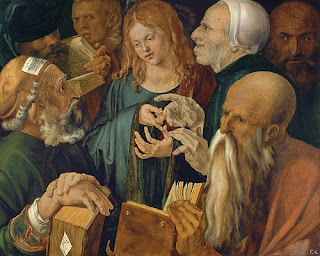 UPDATE (7/01) - the first Sunday after Epiphany, its subject Christ lost and found by his parents in the temple (cue another Dürer above) follows directly on its heels this year, so here we are with the next in line to the one which moved me so much - the (by contrast) three-quarters bright BWV 124, 'Meinen Jesum laß ich nicht' (it was performed on 7 January in 1725, too). I find it intriguing that Bach should carry over one oboe d'amore from BWV 123, because the context is wholly joyful this time - you'd have thought he'd want a straight oboe, but maybe this exquisite variety creates an extra sense of intimacy against the horn-doubled cantus firmus of the opening chorus (Rilling's oboists, as I've already mentioned, are superlative). The pain comes in the tenor's 'Und wenn der harte Todesschlag', so very operatic with the jabbing repeated notes of the strings to which the oboe d'amore and the voice respond. Operatic, too, is the bass recitative, with its chromatics and it run on the word 'Lauf'. The soprano/alto duet which follows is sheer dancing delight, albeit with only continuo complement. Delicious, of course, from Arleen Auger and Helen Watts - what a joy these soloists are on the Rilling set.
Posted by David at 13:22

I enjoyed how you are now in conversation with Gardiner as part of the cantata survey. Have a wonderful opera in focus year, as it seems guaranteed that you will.

I think it is in Siegfried rather than Rheingold, but your entry into the Ring calls to mind Mime's " Hier brauch'ich nicht spaerer noch spaeher. Einsam will ich." C S Lewis pointed to that as an undesirable state of mind. I rather prefer it.

I just listened to the bass aria in BWV 123 with your comment in mind, and I agree, it is hard to experienice it as a lonely aria, particularly with the lovely flute accompaniment. The text, in one sense at least, argues against loneliness, too, as, while he wants the world to leave him, Jesus will stay with him all the time. If I had to characterize the flute, I would say it is Jesus’ spirit hovering nearby, supporting and protective.

Exactly so. It's the middle quatrain that provides the consolation in the text, but the aria as a whole, musically speaking, comes as balm after the tenor aria which IS tragic, though also not without fightback.

I was VERY pleased to find the JEG instalment with the Epiphany cantatas, because he also writes beautifully about the Rev. Fuehrer reading the Beatitudes from the Sermon on the Mount in that quietly revolutionary service I wrote about re the Nikolaikirche on the Bach entry. The Bach Pilgrimage gave those crucial cantatas plus the last two from the Christmas Oratorio in that historically important church.

David (for no good reason I found your comment in spam), would you like to share with us why you find that relevant and potent? I'm not being combative, just curious. Nothing Mime says or sings is good if you apply it to his context.