Let's just celebrate it to the full while we can - probably for the last time on the scale of the usual Europe Day Concerts held in St John's Smith Square for the past ten years. Do stay with the above film until it breaks out into Andrew Manze's Lully/Rameauification of Beethoven's 'Ode to Joy' setting*. We were lucky to have the brilliant Rachel Podger with us in 2016, and I'm happy to share another piece of good news today: Irish soprano Jennifer Davis (pictured below at the 2017 Europe Day Concert), who sang Nielsen, Mozart and Bizet so well alongside tenor Thomas Atkins as our Royal Opera Jette Parker Young Artists participating last year, is to take on the role of Elsa in the RO's new production of Wagner's Lohengrin next month. 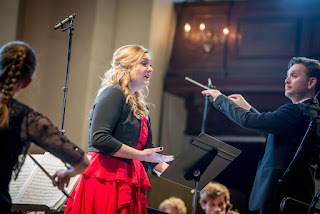 Very sorry for the delightful Kristine Opolais, who's had to pull out and has had a tough time of it recently, but hoping this will launch Jennifer properly on the international scene.

We'll also be waiting with nervous anticipation to discover how the best guitarist I've ever heard, Sean Shibe, fares at tonight's Royal Philharmonic Society Music Awards: he's been nominated as one of three in two of the categories. We hope he'll hotfoot it over for the post-concert party at St John's, but if not, we'll raise a toast, whether he wins or not.**. 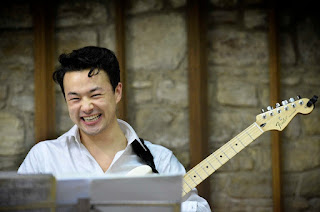 Tonight's programme is about 'Crossing Borders' - Mozart into Spain and Italy, with tenor Ben Johnson and soprano Jenny Stafford also sharing half of Britten's homage to Rimbaud, Les Illuminations, Dobrinka Tabakova transporting us to the Dolomites with her Bell Tower in the Clouds, fellow Bulgarian Michael Petrov as soloist in Bruch's Adagio on Celtic Theme for cello and orchestra, Massenet in Spain, Sullivan in Venice and a grand final flourish from Jonathan Bloxham and the Northern Chords Festival Orchestra, superlative last year, in Brahms - the homaging of Swiss alphorns is the pretext for the finale of his First Symphony. Its big theme will set us up nicely for the model, Beethoven's, always an anthem worth standing for.

*Most recent update (11/5): this year's Ode to Joy and a bit of the intense silence after it is now up and running as a film here. The rest will follow in due course.

**Brief update (10/5): Sean won the RPS Young Musician award. Congratulations, and what great choices throughout (meaning that I agree with them). Meanwhile, a phenomenally well executed Europe Day Concert at St John's hit the heights before ending on an elegiac note as the Ode to Joy was followed by a one-minute-plus silence, ended only by someone's mobile phone going off. We vowed that there will be another next year, however difficult it may be to raise the money.

This year’s program sounds glorious, and the Rameauification of the Ode to Joy, which I have just listened to now, was splendid, seeming as if it was meant to be. I’m grateful to have in hand CDs from earlier years, all thanks to you and J. Happy Europe Day, then, despite it all.

Oh, it was glorious indeed - probably the best ever, with stunning string playing led by Thomas Gould. My New Best Friend Dobrinka's piece did not pale in the least from comparison with Britten's brilliant string writing. The Brahms took everyone through struggle to triumph, though the Ode to Joy was followed not by rapturous applause but a spontaneous minute-plus silence, ended only when someone's mobile phone went off...

Anyway, the good news is that this year it was filmed as well as sound-recorded, so you will be able to watch and listen.

We all agreed that we will find a way to do it next year, wherever the money needs to come from...

Wonderful concert last night, David! Superb performances all round, with terrific orchestra and conductor, and immensely moving. I absolutely loved Dobrinka Tabakova's 'Bell Tower in the Clouds'. Thank you.

Thanks, Carolyn, and only sorry I didn't see you in the throng. Great optimism as well as sadness last night, how could it be otherwise with such a fabulous team of young professionals?