Dante in Eden, Bach after Easter 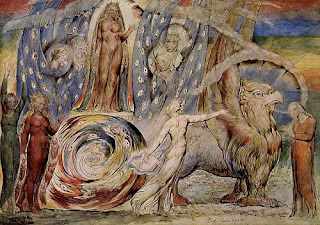 Maybe there was a part of me mildly disappointed by Dante's arrival in the Garden of Eden at the very top of Mount Purgatory for his crucial meeting with Beatrice. I guess I'd expected more description of the natural paradise à la Milton, whereas it's subordinate to allegory and rather too much theologising towards the end of Purgatorio. But then I missed the chance to hear Dr. Scafi and Professor Took spread their own special love for these Cantos, overrunning as I did on the last class devoted to Janáček's From the House of the Dead (we had to see two acts of Chéreau's production, and even the extra time I'd allocated overran). 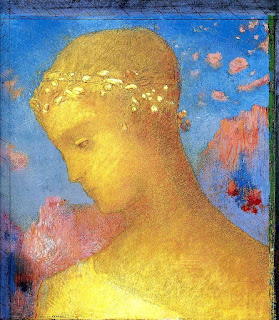 Certainly, though, the official leavetaking speech of Virgil is moving, and concise. I ought to reproduce it here so that, like the examples quoted in my previous Dante/Bach entry, I can try and memorise the Italian when I have time. Translation once again the literal but effective one by Robert M Durling.

Virgil fixed his eyes on me
and said: "The temporal fire and the eternal
have you seen, my son, and you have come to a
place where I by myself discern no further.
I have drawn you here with wit and with art;
your own pleasure now take as leader: you are
beyond the steep ways, beyond the narrow.
See the sun that shines on your brow, see the
grasses, the flowers, and the bushes that here the
earth brings forth of itself alone.
Until the lovely eyes arrive in their gladness
which weeping made me come to you, you can sit
and you can walk among them.
No longer await any word or sign from me: free,
upright and whole is your will, and it would be a
fault not to act according to its intent.
Therefore you over yourself I crown and mitre. 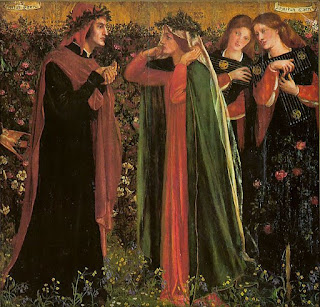 The interrupted dialogue between Beatrice and Dante is certainly unusual. At first, 'regal and haughty in bearing, she upbraids him, and only deigns eventually to show the warmth he craves, finally smiling towards the end of the last Canto, 33. On with the summer term, anyway, where our Dante and our still present Virgil at the Warburg will lead us through Paradiso.

It seems ages since we last met for the final Purgatorio class I was able to attend; and it's been too long since I actually listened to a Bach cantata on the Sunday for which it was intended. I have the five after Easter to deal with here, and since sharp memory of all of them fades - I have the notes in my book still - I must head only for the high points, and three arias especially. 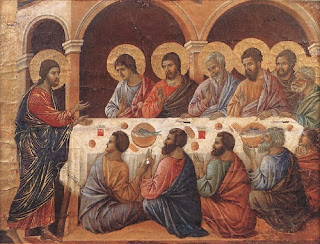 BWV 42, 'Am abend aber desselbigen Sabbats' begins with an almost Handelian sinfonia - the only cantata to start that way in Bach's second Leipzig cycle - before the tenor introduces the opening text over throbbing strings (perhaps the beating hearts of the Disciples as Christ walks among them). And then, and then, one of the loveliest arias in all the cantatas, surely, and that's saying something (one would probably have to include at least two dozen in the top list). The first of the two oboes made me want to get my long-neglected instrument out of its case. Gardiner describes how he found 'Wo zwei und drei versammlet sind' 'unbearably pained and sad at our first performance, and far more serene and consoling at the second'. Can't find a recording to match Rilling's two oboes and mezzo Julia Hamari, so here's the whole thing from the cycle to which I'm adhering. The aria is at 6m42s.


BWV 85, 'Ich bin ein guter Hirt' starts with bittersweet pastoral and flows beautifully. BWV 146 begins originally with a surprising adaptation of the D minor Harpsichord Concerto - brilliantly rendered, incidentally, on the Jean Rondeau disc we nominated as BBC Music Magazine concerto disc of the year, and I'd have been happy had it won. Wonder of wonders, there's even a film of the first movement to go with the recording on YouTube. If, like me, you're not usually excited by the harpsichord, this should help you change your mind.


The cantata continnues with a slow, astringent choral movement, also concerto-based. It has the next ineffable aria of my three, 'Ich säe meine Zähren', conjoined with a very expressive recitative, also for the soprano, haloed by sustained strings. Helen Donath is the best possible substitute for Arleen Auger, Rilling's most frequent soprano. One wonders if Mozart's exquisite woodwind ensemble writing stemmed from Bach - nothing could be lovelier than the quartet of flute, two oboes d'amore and bassoon on the bass line. Because I don't actually like Rilling's organ in a couple of stops, I've chosen Gardiner for the complete recording. Recit and aria are at 24m13s


It's a contrasting expression of sowing with tears and reaping with joy. These 'twixt-Easter-and-Ascension cantatas seem much to do with earthly sorrows, heavenly promise, but maybe that's the essence of the Lutheran texts throughout. I'm going to pass swiftly over BWV 166, with its striking short phrases for oboes and violins around the bass's 'Wo gehest du hin?'s and another lovely weave of solo violin and oboe around the tenor aria, and end with BWV 87, 'Bisher habt ihr nichts gebeten'. The winner here is another alto aria, 'Vergib, o Vater, unsre Schuld', with elaborate writing for oboes da caccia, a rising bass line and one of Bach's most involved middle sections, winsome when it breaks out into triplets. The mezzo/alto needs superb breath control here. Alas, no Rilling on YouTube, and some weedy countertenors are no substitute, so I had to make do with Koopman - too slow, I think - because of Bogna Bartosz at 2m44s.


The tenor's recit ties in nicely with Dante's far from easy journey to the top of Purgatorio: 'When our guilt climbs all the way to heaven, you see and know my heart, which hides nothing from you; so seek to comfort me'.
Posted by David at 14:55

In the case of poetry in a foreign language, I strongly prefer a prose translation - written in "poetic" language perhaps, but not trying to turn the original into a poem in English, that is with no attempt at metre or ( even worse) rhyme. This leaves open the possibility of a more exact translation, or one which can reveal the essence of the original thought, though not necessarily translating word for word

What is the picture of the seven saints and the four non-saints?

Which is what you've got from Durling above. As I grasp just enough of the Italian to compare, I find it perfect. None of the poetic translations I looked at, including Dorothy L Sayers', seemed the least bit 'Italianate'. And Dante is quite direct in his expression for the most part.

It's Duccio, The Resurrected Christ appearing before the (eleven remaining) Apostles.

I was a failure at memorizing text in English, and here you are with a plan to memorize in Italian! Many thanks for the survey of more Bach cantatas, which I have earmarked for listening when I can.

Took a time out from annoying chores and sunk into that gorgeous aria from BWV 42. I can well imagine you'd be tempted to get your oboe out of storage. Then was tempted further by the video of Jean Rondeau and ensemble. I, too, don't often warm to the harpsichord (though I very much enjoy Poulenc's Concert champêtre), and you are right, Rondeau's performance is exciting indeed. (Also enjoy that he looks every bit as if he'd be hope in a rock band!)

Spell check continues to be the bane of my existence. “He’d be hope” should have been “he’d be at home.”

Rondeau looks like a hyper-cool hipster. Only 27, just a little bit older than guitarist Sean Shibe who triumphed last night at the RPS Awards. Both young artists are making us think differently about their instruments.